Hard to believe but it was six years ago today, Mayor Peter Cammarano of Hoboken received a knock at the door from the FBI at 6:00 am saying, "Come with us." 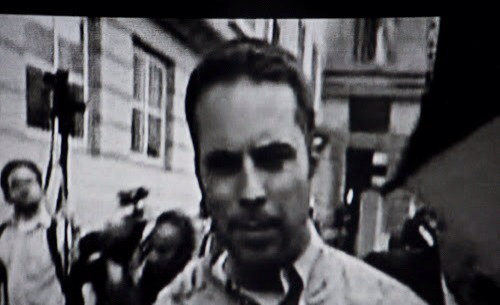 The FBI would release a criminal complaint detailing how Cammarano had taken $25,000 in bribes for the promise of backing an unknown developer project sight unseen in Hoboken.

The convicted former mayor and felon illustrated his feeling about the Hoboken electorate in another portion of the tape saying, "I could be, uh, indicted, and I'm still gonna win."

Cammarano would serve a reduced two year sentence in Lewisburg Federal Prison and was the subject of some news and court papers among the SLAPPed defendants in the Bajardi v Pincus frivolous litigation.

His appearance on behalf of Lane Bajardi and Kimberly Cardinal Bajardi along with fellow convicted felon Patrick Ricciardi, Beth Mason and Timmy Occhipinti was highlighted unceremoniously in court documents as a "parade of felons."

In Cammarano's sworn testimony last February in Hudson Superior Court, he highlighted a conversation with FBI informant Solomon Dwek and his subsequent arrest never mentioning once to the court and jury he had taken $25,000 in cash bribes.

You would think it was all some vague misunderstanding.

Talking Ed Note: Perhaps Hoboken would like to see the trial transcript testimony of one ex-Mayor Peter Cammarano?

As an aside, MSV's origin in the summer of 2009 was a direct result of then Mayor Peter Cammarano's refusal to resign after his arrest.

Related: Grafix Avenger dug into the archives of the Bajardi v Pincus discovery and promptly connected the dots on the work of Lane Bajardi and Perry Klaussen of Hoboken411 in full character assassination mode to aid Councilwoman Beth Mason's doomed bid to be elected Hoboken mayor.

Among the tidbits in the series of emails is a letter from Peter Cammarano attorney Michael Goldberg and Lane Bajardi urging Klaussenfluffer on Hoboken411 to sue Cammarano even as Goldberg is threatening "to sue us" as Bajardi refers to himself and Klaussen as being one and the same.

Lane Bajardi who would later be pictured sucking up to Cammarano at his mayoral inauguration states there's a family fight over his grandmother's seven million dollar estate. That might explain how the bills were being paid on the uptown Bloomfield brownstone when Cammarano was in the federal clink. (Hat tip: Lane Bajardi.)

The Grafix Avenger six year Cammarano arrest anniversary story is a must read.

Here's just one of the featured emails; just a taste to wet your beak: