Patrick Ricciardi, the former IT head caught ransacking electronic communications both ways coming and going out of the Mayor's Office in 2011 may be back in the Hoboken news again.

Ricciardi who served no time in federal prison but was sentenced to five years probation is thought to not be making friends among his neighbors in his building in the third ward, MetroStop.


Ricciardi's unit on the seventh floor is a rumored concern inside and outside the building for noise, an endless parade at all hours of shady characters, the odor of drugs inside the building and on elevators. Recently a decorative "party" vehicle had become a fixture on the block adding to the questionable neighborhood problems. It may have been ordered to move after possible police intervention.

A sheriff's order to seize the property has been held up related to the City of Hoboken ordinance designating the unit "workforce housing," and the legal complexities regarding its former municipal employee.

An item on the agenda at tomorrow's single August City Council meeting includes a closed session on the building MetroStop. Presumably, it's to tackle the Ricciardi problem.

Residents however have reached the breaking point trying to resolve years long problems. They declined to go on the record expressing reservation about Ricciardi's Hoboken "connections."

The City of Hoboken is in an uncertain legal situation dealing with a former employee tied to an existing housing program, possibly with an inadequate ordinance further complicating the murky legal matters.

Numerous former municipal employees terminated have launched legal action at the City on an almost regular basis. One, a former colleague of Ricciardi's at City Hall recently was returned to the City payroll by the state civil service system with back pay after first admitting complicity then later denying same in the massive data theft conspiracy back in 2011.

Ricciardi was earning approximately $204,000 in his last full year of earnings as a municipal employee on a base salary of 73K in 2010 according to a MSV OPRA request. The prior year, he made over $190,000 with massive overtime pay rates and another paid position in OEM (Office of Emergency Management).

Last February, Ricciardi was called as a witness on behalf of Lane Bajardi in what one defense counsel later described in public court documents as "a parade of felons." Other plaintiff witnesses appearing on behalf of Bajardi included former mayor and convicted felon Peter Cammarano and council members Beth Mason and Timmy Occhipinti.

In his February testimony, Ricciardi misunderstood one question from the defense counsel and replied he was "a victim of the system." He denied he was the source of alleged stolen emails found in Lane Bajardi's email account out of the mayor's office which were trafficked by Hoboken411 via a senior fire official.

Under questioning by Pincus attorney Stephen Katzman, Ricciardi offered this in an exchange about email theft out of the mayor's office:


Ricciardi who is currently on probation refused under oath to answer a question on who he shared the mayor's stolen emails: 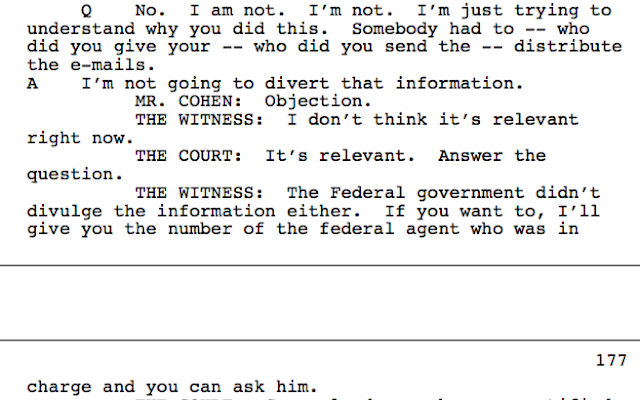 The mayor's office declined to comment on an ongoing legal matter.


Talking Ed Note: Back in November 2011, Patrick Ricciardi's estranged wife had much to say about his "connections" in the comments section of a NJ.com story.

All of her comments in the NJ.com story quickly disappeared for unknown reasons. MSV however saved them. Here's a sample of Janett Ricciardi's remarks as originally published on NJ.com:

Related: The complete, original comments originally posted on NJ.com were published on Grafix Avenger back in November 2011: