Grist for the Mill: Giving'em the Old Guard Push

When negotiations break down and the old methods of keeping candidates off a Hoboken election ballot fail, there's always daylight in advance of "withdrawal" day.

It's the designated date filed candidates can withdraw their petitions and not appear on the ballot. This year, it's thought to be 60 days before the election which would officially be September 4th. That date is confirmed for Board of Eduction candidates.

It's unclear however if that's the case for non-partisan municipal NJ elections this year. 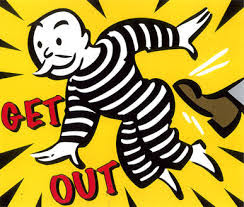 More added pressure for related efforts to give the ole heave-ho to candidates who could get in the way. In the second ward, there's focus on Bonnie Murray, the wife of often failed BoE candidate Brian Murray.

Bonnie Murray made an appearance at Ruben Ramos' fourth ward council kickoff held at his home last week and is unofficially the Carmelo Ticket candidate in the second ward.

There isn't exactly many second ward votes clear across the Mile Square at the Ramos household but ticket loyalty even unofficial ticket loyalty goes a long way toward mutual unity efforts.

In this case it's the Applied Housing votes in the second ward all the rage between Old Guard camps. Second ward candidate Peter Biancamano would love to scoop up those votes but first someone has to give a nudge to Bonnie Murray.

Back in the day, the nudge could be more akin to a tightening squeeze around the neck. Problematically, the Carmelo Ticket wants to return the favor to Biancamano and Frank "Pupie" Raia who were council tickets in a late 2013 slate bid with Timmy Occhipinti atop for mayor reducing the chances of Ruben Ramos toppling Mayor Zimmer.

If the three candidates in the second ward hold past the official withdrawal date, expect the Carmelo Ticket to seize the day in Applied Housing making Bonnie Murray more than a nuisance but a legitimate candidate.

There's a sizable Hispanic vote in the Applied Housing buildings, one historically pliable to arm twisting and other forms of encouragement. Ruben Ramos received strong backing there in 2013 and that influence is transferable to Bonnie Murray.

In 2011, the Applied Housing vote was the last bastion of votes for Beth Mason who had all but squandered any base as a reformer when she threw in with the Russo Clan in her first failed bid for mayor in 2009.

The open question: is a Vote-by-Mail war going to extend beyond the third and fourth wards into the second?

If Bonnie Murray remains a candidate past the withdrawal date, there could be.

Related: One City Council candidate is already publicly volunteering to withdraw if certain conditions are met. Melissa Blanco, a virulent hater of Mayor Zimmer and the Reform Movement offered as much in an interview on filing day outside City Hall with John Heinis at the Hudson County View.

The Carmelo Ticket will insist she do so in order to not detract votes from Eduardo Gonzalez in his bid to unseat Reform's anti-corruption champion Councilman Peter Cunningham.

Blanco who's allegedly unleashed numerous screeds on various sites from PolitickerNJ to the Hudson Reporter and on occasion maybe even MSV also spoke to the mob trying to prevent a hearing and vote terminating Carmelo Garcia's contract last summer.

Unsubstantiated accusations on various issues including corruption have allegedly erupted regularly under various screen names but since the scathing audit report along with the millions of dollars in unapproved spending by Carmelo Garcia in the Hoboken Housing Authority, not a single word by Blanco.

Alleged attacks on corruption instead are posed against HHA Chair Dana Wefer.


Grist for the Mill is MSV's rumor column. Got a tasty carrot for Da Horsey? Send it to smartyjones@me.com. All email is kept confidential until mutual agreement and is protected by Da Horsey's proven Reporter Privilege upheld under the NJ Shield Law.
Posted by SmartyJones at Wednesday, September 02, 2015