Art is a subjective creation that captures a person’s heart or inflames their soul.  The first prospect is the goal set by D. H. MacAulay and his former media students.  MacAulay and his team of young video/film makers are currently preparing their upcoming feature digital video production, In My Own Mind, a project that is to be shot in Hoboken and Hudson County during the summer of 2016.

In My Own Mind is about a young man whose actions show a positive, well-intentioned artist, who is looking for a woman who shares his romantic interest in having a ‘happy” family.

Sam Rodriguez’s life includes two low paying jobs, as a guard at a gallery and as a customer service representative at a bookstore. It is at the bookstore where he meets his new friends, Ross, and his son, Eric. Sam helps Eric pick out a book for his Dad and helps him with the price of the book, without his father suspecting.

Sam, Ross, and Eric will meet again, but in the local park where Sam sketches in. Sam is inspired by Eric to write and illustrate a book which is titled, “The daily life of being a Dad.”

The art and literary world come together for Sam, as he sells one of his park paintings at the gallery and the bookstore owner, Mr. Cohen, introduces Sam to a publisher who wants to publish his book. But like all surprises in life, Sam’s success is darkened when Eric is found to have sickle cell anemia.

Sam discovers the ups and downs of parenthood, as he tries to help Ross by giving him his residual check. The next book that Sam and Eric work on as he is recuperating in the hospital is titled, “The daily life of being a patient.” While visiting Eric in the hospital, he is introduced to one of his biggest book fans, Dr. Rachel Friedlander, Eric’s doctor and Sam’s future wife.

MacAulay has been working in film and digital video since 1990 and began his teaching career as a media production teacher in 2001, first with the Hudson County Schools of Technology and later with Hoboken High School, where he is currently still teaching.  He became a teacher because he wasn’t happy with the self-indulgence he saw in the film industry. He says that he decided then, “If you get a rotten apple, don’t go back to the barrel, but pick them fresh off the tree.” He continues, “I decided to work my own orchard so I could make better apples.” 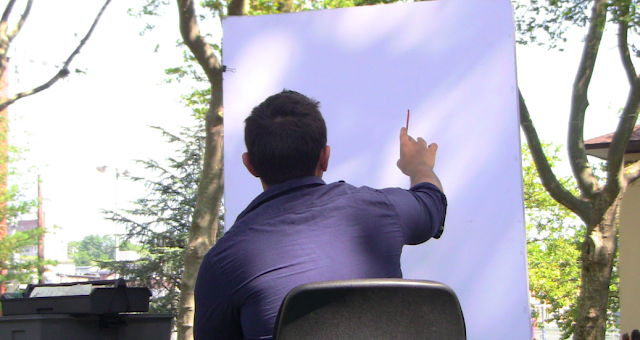 MacAulay and his students have produced short digital videos, commercials, music videos and current event videos.  In 2004, he and students Ingrid Uribe and Jerri Siro won the NJ Young Film and Video Makers Festival, which is a part of New Jersey’s Black Maria.  In 2010, his Hoboken Media Production class won a Telly award for a music video they shot and produced.

In 2010, MacAulay wrote the first draft of the screenplay, In My Own Mind, at the urging of a student. It languished on his computer until 2012, when MacAulay suggested to one of his Hoboken High School senior students that he might be good for the lead.  He gave the student a copy of the screenplay and they decided to produce the project.  However, as they were in the beginning stages of fundraising, with the goal of shooting by the summer of 2013, Hurricane Sandy hit New Jersey.  MacAulay decided to put the project on hold. “I didn’t think it was ethically or morally the right thing to ask our friends and neighbors for money for our project when so many had lost so much during the storm.”

This past spring, MacAulay’s advanced class Media Production 2, asked about creating a more ambitious production than a short film. “I told them the story of In My Own Mind, and explained that we could continue raising money for this production or create a new project.”  Three students opted for In My Own Mind and the pre-production process has begun.

Alumni from both HCST and Hoboken High School have been working with MacAulay to raise the $230K budgeted for this project.  They have set up a Creative District listing, Gofundme page, and Facebook page for this project.

Breaking into the world of independent cinema is no small feat.  That is why Hoboken cinephiles and arts integration advocates should consider lending their support to this exciting new venture.

On October 14 and 21, Johnny Rockets in Hoboken will be donating 20% of their total receipts (not including tax) toward the project.  Interested in participating?  Johnny Rockets will provide a fundraising flyer beforehand to keep track of patrons interested in donating.

MacAulay and his Director of Videography, John F. Cole (HCST Class of 2004), have started the “shooting script,” which adds shots and angles to the existing screenplay.  Dylan Irizarry has signed on as the Assistant Director.  Current students and future graduates of the Class of 2016, Baltazar Gonzalez and Bryant Vega, are both the producers on the project, Arturo Liranzo is head camera operator, and William Ithier III is 2nd operator.

For further information, please go to facebook.com/imommovie. If you’d like to help this ambitious team of artists reach their goal:http://gofundme.com/7pk5kpnw.  Plans are in motion to begin production on July 6, 2016 and wrap by August 15, 2016.
Posted by SmartyJones at Wednesday, September 02, 2015