Grist for the Mill: Newest "Darksider" Kaufmann going under the bus?

When you embrace what Grafix Avenger affectionately dubs "the Darksiders," there's risks. The idea of immortality for one sounds nice until you discover there won't be any summer days at the beach in Miami or the Caribbean.

Get wrapped up in some darksider vampire hype can be a real pain in the neck.

When it comes to the Hoboken Board of Eduction races, the Darksiders like to throw curveballs and lop on a spitter when the mood strikes them and a "yuppie" is temporarily under their spell.

Which of course means that if there's a whisper campaign to insert Patty Waiters onto the BoE, one of the three official candidates must find themselves thrown under the bus.

It won't be John Madigan, hometown hero to those who enjoy vulgarity tossed at female BoE opponents. So too, you can probably cross off Britney Montgomery who was a City Council throw-in on the Pupie ticket in 2013.

Which leaves Alanna Kaufmann who is pictured below as the answer to the question "Which of these doesn't fit with the others?"

Should the BoE numbers on election night show a disparate lower vote total for Kaufmann versus her two other darksider running mates, she can't say she wasn't warned. Maybe she can consult with Peter "Monarch Man" Biancamano, a developer superhero to the Darksider ticket. 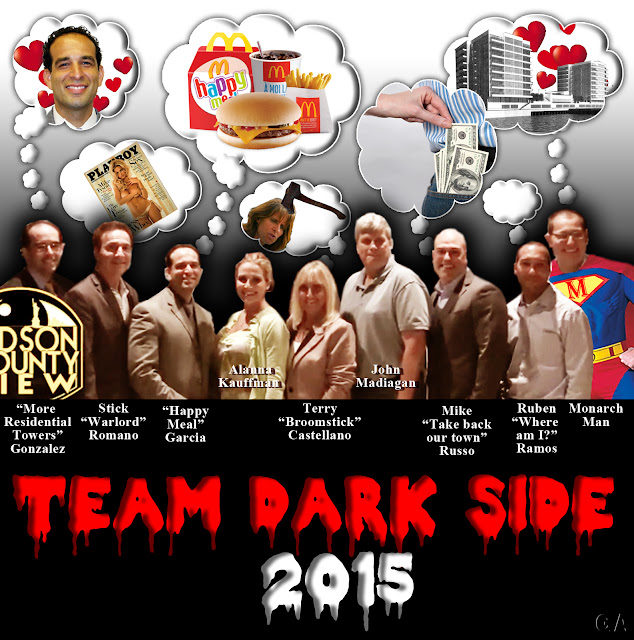 Related: Grafix Avenger has a side-splitting brilliant satire on the council forum last night. You won't want to miss it: http://grafixavenger.blogspot.com/2015/10/debate-monarch-man-scores-garcia-flees.html

Grist for the Mill is MSV's rumor column. Got a tasty carrot for Da Horsey? Send it to smartyjones@me.com. All email is kept confidential until mutual agreement and is protected by Da Horsey's proven Reporter Privilege upheld under the NJ Shield Law in Hudson Superior Court.

Posted by SmartyJones at Thursday, October 01, 2015