Bring out your corruption?

Voices in their own minds deemed self-important pat themselves on the back while issuing platitudes on the moral equivalence of "both sides" in Hoboken politics.

Yesterday, Hoboken was witness to a litany of reasons how untrue that delusion is and since the public has short memories, let's put some of yesterday's incidents on the record.

First, there's the notorious application of Vote-by-Mail among certain Old Guard campaign crews; a staple food group of their election activities. Over 1500 VBMs were tabulated in applications in the Mile Square City. Most were clearly legitimate but hundreds perhaps several hundred were not.

Exhibit A, here's an interesting reference to the going rate for paid voters in Hoboken. Note the amount highlighted a few entries in makes mention of $40. 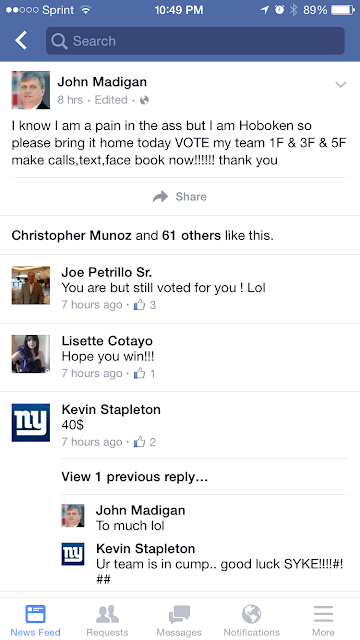 The VBMs yesterday threw the results unofficially announced on the Board of Elections website askew. Earlier the Reach Higher BoE slate showed they had swept. After 10:30 pm, VBMs were added and suddenly they lost two of three seats.

John Madigan, short of law enforcement taking major action investigating VBMs is headed to being sworn-in a BoE trustee. There's lots of murmuring about this and not much can't be said without making those unaware shake their heads in disbelief.

Yesterday a series of bad actions by the usual bad actors reared its head. Councilman Michael Russo went into a polling station in the fourth ward and got into the face of a Dana Wefer challenger who questioned why poll workers were taking voters into the booths and voting with them.  Russo did not like this "interference" with voters.

County officials were brought in and the scenario repeated itself when the challenger attempted to put the issue behind and went over to offer to shake hands with Russo. The unopposed third ward councilman promptly yelled out for the police, a technique MSV has witnessed used by his father.

Hey Mikie do you think that story's over or is it recorded on memorex? (People in this town are learning just how to deal with this type of Old Guard behavior.)

In another part of Hoboken yesterday, a Reform candidate who MSV won't name questioned some electioneering too close to a polling station. After it was addressed a conversation with an opposing supporter led to the candidate expressing pleasantries and shaking the person's hand. The hand shakee promptly yelled out their two handed handshake constituted "assault."

Uptown at Fox Hills, late afternoon Beth Mason's sidekick Matt Calicchio, a sitting fourth ward Democratic Committeeman entered the voting area illegally and according to eyewitnesses began screaming his grandmother must be allowed to vote (again). The abusive ruckus continued for some time as he insisted another vote was going to happen and no one could stop her. She had already cast a Vote-by-Mail ballot registered with Hudson County.

The Hoboken Police Department arrived and once two officers entered, one witness recounted, "All the yelling and screaming and abuse just stopped. He just sat down in a chair and shut up." The police professionally escorted him out of the building.

Why should Old Guard voters not vote twice? Several independent reports that Ruben Ramos VBM voters were not only going to the polls at his campaign's urging but poll workers were allowing some to go ahead and vote a second time on the machines. Additionally, over 100 Ramos VBM workers were recorded voting provisionally in addition to their VBM ballots already recorded.

Councilwoman Beth Mason after being shown the door at the Calabro School polling station early in the morning was not impeded by the law which states if you aren't on the ballot you can't be lingering in voting polls. She reportedly entered more polling stations through the day and one observer recounts her visit to Fox Hills.

"She came in and it was a lull with no voters there at the time," this witness offered agreeing to speak only anonymously. "She made a big thing about telling everyone she wanted to say goodbye one last time but she seemed clueless as no one cared." The witness said a decision was made to let her stay a few minutes as no voters were there and "everyone just wanted her to leave without a scene."

Talking Ed Note: There's more to all this but there's your sample of "moral equivalence." Why would anyone want any of these people in charge of anything let alone government and our tax dollars we'll leave for another time.

Posted by SmartyJones at Wednesday, November 04, 2015