The thing that would not go away and other NJ misadventures courtesy of Grafix Avenger.
It's the latest satirical side-splitting truth serum from Hoboken and north Jersey's best lampoonist.

This time it's NJ President of the State Senate Steve Sweeney featured, who is a force in the south attracting carpetbaggers and the favorite son for NJ governor in 2017 from those parts down yonder.

For the third year in a row, he allows something to attach itself like a barnacle in Atlantic City to cover the cost of the drinking tab of political pols and their underlings at the League of Municipalities gathering. Nothing swells the hearts of NJ pols like other people picking up the tab.

Not quite the deal with the devil; paying this tab doesn't buy you a spot on the ticket for Lt. Governor but Da Horsey hears it could get you on a nice environmental or transportation commission in say Camden.


Wouldn't that be lovely? 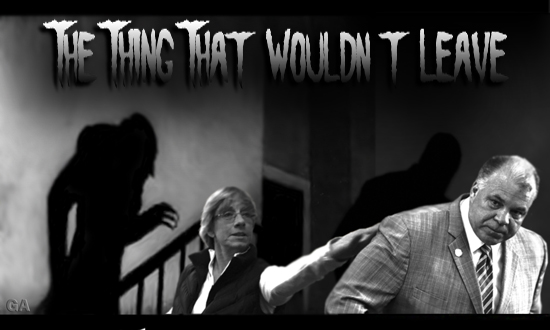 Has to beat another unsung episode of Sweeney Todd doesn't it?

Grafix Avenger has more on all this and the continued climb of one Tommy Bertoli.