The trauma of reality after the November council election seeing the Old Guard council's influence dwindle to negligible is upon us. A 7-2 council starting January means projects will come to finality of approval in some shape or form and no amount of jabber this or that will matter.

Washington St.'s overhaul is high on the list and Sinatra Drive not far behind. There's no quarters, not a million not a handful available to any south Jersey mob companies or in a back room in town anywhere. Reform with Mayor Zimmer at the helm has shut the money faucet.

That faint chattering you hear in the distance is the sound of Old Guard gnashing of teeth. The rumor mill will be churning out mounds of hooey in a desperate bid to create a reality the election results could not and a dream default alignment of a Jabberwock third way alliance connected to Ruben Ramos, a brief ally in the Old Reform camp more than a decade back. 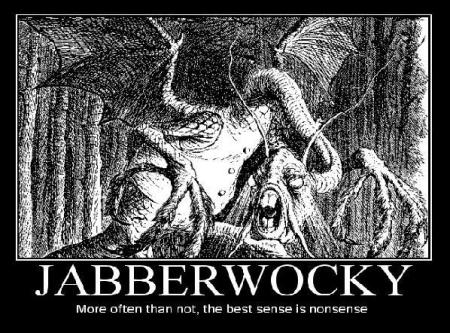 The Hudson Reporter never enthusiastic in reporting on the nefarious activites of its Old Guard allies is sucking down this drivel fostering a new kind of comic book super hero zealotry: Reform recruitment!

If you find your best laid plans for the November council elections gone awry, one's left in the realm of fantasy to save the Star Wars Old Guard Death Star any way possible. With a 7-2 deficit on the City Council, there's no easy road to survive the next two years in the wilderness.

Last weekend's "Between the Lines" comedy which can't get Hoboken half-right in a good week is promoting vain Old Guard hopes across the Mile Square with a rancid stew of Jabberwocky saying they will appeal to Councilman Dave Mello and Councilman-elect Michael DeFusco for some unheralded opportunity.

DeFusco said he'd listen and work with everyone but the jabberwocky which failed to defeat him leading into the election now sees him the target of more bitter attacks in a style reminiscent of Hoboken411. He's being pegged as Ruben Ramos' double agent and he hasn't attended a single City Council meeting as the first ward councilman yet.

Councilman Dave Mello who has water infrastructure on his mind with the downtown water main break over the weekend is pegged to be a lackey to the Ramos-Russo grand design for Mile Square City domination. Russia's guy Putin would sooner get hugs in the Oval Office before Mello and Mikie Squared hug it out on the council dais. Mello will be Council President come January if his busy schedule allows it not because of any jabbering into Sully's ear.

All this mad scrambling with the holidays upon us means only one thing. Next week, it's second ward Councilwoman-elect Tiffanie Fisher flipped to Team Jabberwock and deals with the Old Guard council are imminent! Dreams of Michael Russo and Ruben Ramos come to pass with 30 story buildings dotting the Hoboken landscape. Alright, apologies to Sully for stealing his comic material. Fisher will not suddenly materialize into Monarch Man (or woman).

As Public Safety Director Jon Tooke is winding down his role to the end of the month, the history under Mayor Zimmer suggests there are resumes under evaluation if not interviews concluded. Anticipate a public safety professional with solid experience to emerge as a replacement not the current parking director.

With an eye to the future, Ruben Ramos is being touted as the future for the Old Guard but what can he do in two years to make Hoboken voters forget his previous stint on the City Council and change his fortunes in a potential rematch with Mayor Zimmer come 2017?

A looming immediate obstacle for Ramos is Anthony "Stick" Romano who is taking credit for the BoE's results putting former BoE employee John Madigan on to the school board and washing his hands of the City Council race. It's a little late for that spin but he's the main challenger to Ramos in any 2017 mayoral run in addition to the incumbent.

Who would be the better candidate to try to stop if not simply lose to Mayor Zimmer in 2017 is the real question in Old Guard circles. The mayor is eyeing public input and the process implementation for the Rebuild by Design plan and is not likely to walk away from that legacy incomplete.

Which means you'll be reading more comic book Old Guard Jabberwocky tragicomedy for quite some time.

Probably best to hit the snooze button unless you need a laugh along the way.  And that my friends is no jabberwocky.


Talking Ed Note: A recount is slated today at the Hudson County Board of Elections. There's not a great likelihood the last Board of Education trustee seat changes in the difference of 36 votes between third place Britney Montgomery and fourth place Addys Velez.

While a problematic voting machine in Councilwoman Jen Giattino's sixth ward at Calabro cost her a bigger win with a ballpark 100 votes "lost," it may have cost the Reach Higher BoE ticket a second seat in the election.

Unless further challenges are put forward, the third seat in the BoE election will go to Montgomery.
Posted by SmartyJones at Monday, November 23, 2015