1,000 emails up for release in Carmelo Garcia "ethnic cleansing" lawsuit

As previously reported on Grafix Avenger, a dispute over the release of 1,000 emails between Carmelo Garcia the former Executive Director of the Hoboken Housing Authority and his attorney, Louis Zayas is up for a hearing today in Hudson Superior Court.

The emails under review are those exchanged while Garcia worked at the agency up to August 2014.

The hearing, set for 1:45 will determine if the emails in question are privileged or available to the HHA which like the City of Hoboken is fighting Garcia's revamped ethnic cleansing lawsuit originally filed in the summer of 2013 before the Hoboken mayoral election.

Garcia imposed a draconian handbook for HHA workers outlining its policy on use of its server and electronic communications stating the agency "reserves the right to access and disclose as necessary all messages sent over its systems without regard to content."

The former HHA ED is having second thoughts and wishes to be exempt from his own policy.

The suggested 1,000 emails may tell a story sharply differing with the legal narrative constructed by the plaintiff who saw his first version of his lawsuit thrown out of court in December 2013. It's been amended and refiled more than once since.

Grafix Avenger, who broke the story earlier this week notes Garcia designating the HHA as the controlling authority in matters related to electronic communications on its server is clear.

The hearing today may rule on usage of the 1,000 emails between Garcia and Zayas and ultimately determine the outcome of the case. 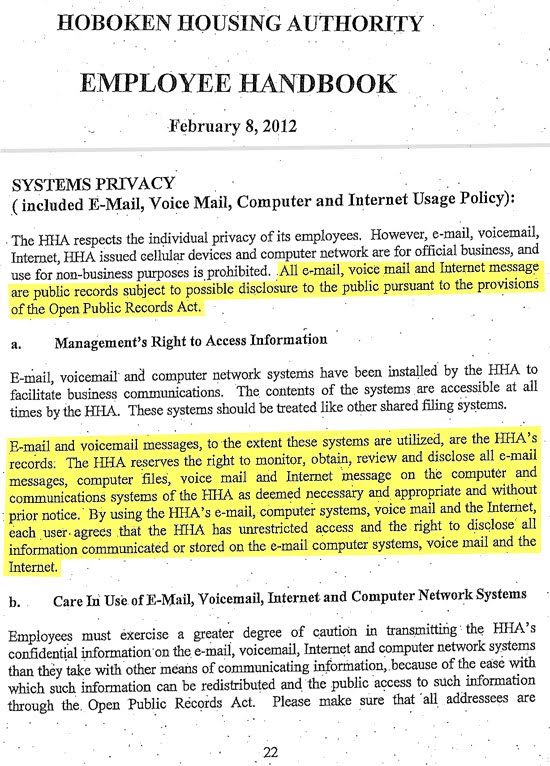 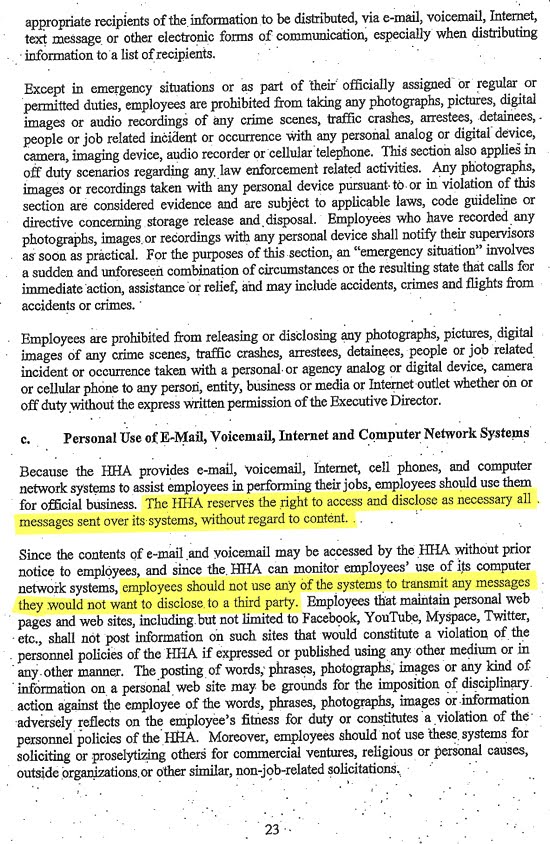 Talking Ed Note: In recent years, Hoboken has seen a slew of litigation and political operations attempting to use emails for legal and illicit purposes.

In early April 2011, Council members Michael Russo and Beth Mason as a counter to the exposure of his being seen on FBI surveillance tape agreeing to a series of bribes with FBI informant Solomon Dwek, put up a resolution demanding all emails exchanged with numerous members of the public and the mayor's administration.

The demand was later scaled back to local media but targeted Reform websites such as the Hoboken Journal, Grafix Avenger and MSV. The political operation failed and in its place the IT manager at City Hall, Patrick Ricciardi, a known friend of Russo was arrested by the FBI for intercepting and copying possibly 100,000 electronic communications of emails coming and going with the mayor's office. The illegal emails were filtered through public safety and unknown others.

Ricciardi would play a role in another case where emails were featured prominently: the 2012 infamous frivolous SLAPP-suit publicly supported by Beth Mason. He testified earlier this year in Bajardi v Pincus after his felony conviction as a witness for Lane Bajardi. But he balked at answering he had provided stolen emails to one well known conduit: Hoboken411. His refusal to answer led to his ejection by the court as a witness.

More recently, the Hudson Reporter has seen itself in the epicenter of possible legal and email controversies. It among several media outlets received a batch of emails in the Garcia litigation and claimed that they showed evidence of the mayor's husband "firing" Garcia. The emails were proclaimed determinative to their claim. Hudson County View which received and published some of the litigation emails did not make the same determination.

Claims the Hudson Reporter would make public a total of 500 emails claimed in its possession proving Garcia's "firing" have seen no emails published at all placing the pro Old Guard rag under further scrutiny and possible legal exposure.

On a humorous vein, Al Sullivan made wild claims against "the blogs" code for Grafix Avenger and MSV about a month ago.

Unfortunately, the Hudson Reporter doesn't have a good track record on those questions. It avoided any coverage on much of it. Sully dove in making a promise never kept the Hudson Reporter would publish ALL the Garcia litigation emails and threw in some personal insults for good measure.

He got called out again. 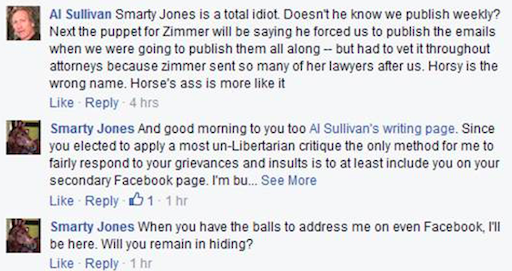 Sullivan continued ranting but first blocked Grafix Avenger and MSV from viewing or replying to yet more unsubstantiated allegations. He said MSV never checks facts. It was met with a small challenge after he dug the hole deeper with even worse lunatic fringe claims about "marching orders."

Is this any way for a "journalist" to act who makes his living off the First Amendment? Grafix Avenger immediately called out Sullivan who joined the editors at the Hudson Reporter hiding under their desks from inquiries by "the blogs" when an early 2012 hit job against both Grafix Avenger and MSV was uncovered as part of a political operation involving Beth Mason and her chief political operative coordinating at the HR office. (Grafix Avenger detailed the attempted hit in May 2012.) 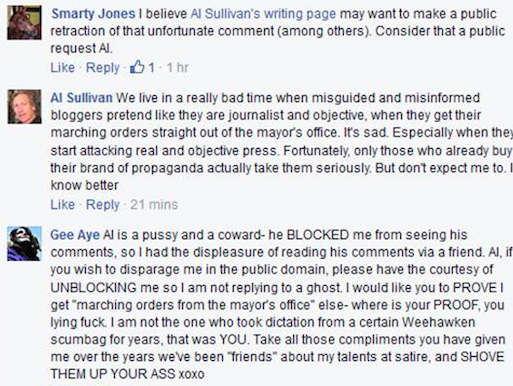 A phone call and texts to Sullivan days after this unfortunate behavior was never returned. Da Horsey is still happy to speak to Sully, Caren Matzner or anyone with the guts to face the music at the Hudson Reporter. As for Sully, he should at least take a minimum of professional advice and email or phone subjects of his columns. Start with Mike DeFusco who will like Da Horsey probably be pretty forgiving about outlandish claims about him and Ruben Ramos. (No worries here Al, you've already received absolution from this horse, it's Christmas. Good luck!)

As for the Carmelo Garcia "ethnic cleansing" litigation emails in the hearing today at Hudson Superior Court, Release the Hounds!
Posted by SmartyJones at Friday, December 04, 2015