Statement from Mayor Zimmer on Rebuild by Design

STATEMENT FROM MAYOR ZIMMER ON REBUILD BY DESIGN

Thank you to everyone who came out last night to the Rebuild by Design drop-in session at the Hoboken Historical Museum following up on the meeting at the Wallace Gym last week. We want to continue to hear resident feedback and answer questions as we move forward towards a comprehensive plan to protect our City from future hurricanes and storm surges.

I fought hard to win the Rebuild by Design competition in 2013 so that our City would never again face the devastation of Sandy that destroyed so many of our homes and businesses across 80 percent of the City. I truly appreciate how Hoboken came together after Sandy. As a community we made it through the storm because thousands of residents volunteered and opened up their homes and helped out neighbors in need.

I recognize that people in Hoboken had different experiences when Hurricane Sandy struck our City depending on which neighborhood they live in. At last night’s meeting, I heard from many residents who did not flood during Sandy who thought we should address flash flooding from heavy rains but not protect the City from coastal flooding due to storm surges. It is understandable that each person’s Sandy experience creates differences in perspective about the urgency of protecting our City from future storm surges.
As I reflect on the devastation of Sandy and the recent fear from a potentially even more devastating Hurricane Joaquin, I believe we need to prepare for a different future, and doing nothing to protect from storm surges is not an option. I never want to have to call on the National Guard to save us again, and I never want our community to have to experience that kind of pain and devastation.

Rising seas will mean that even moderate storms will be a greater flood threat in the future. Many residents may not be aware that North Hudson Sewerage Authority’s (NHSA) sewage treatment plant was severely damaged by Hurricane Sandy and came within inches of being completely flooded. This could have left our community and the 180,000 residents in our region that rely on sanitation services from NHSA without the ability to flush our toilets for quite some time. NHSA is located it northwest Hoboken and would be protected by implementing the resist strategy. We cannot leave thousands of residents and businesses, our sewage treatment plant, electrical substations, and hospital vulnerable.

Just as we came together as one community after Sandy, it is important that we work together to find a preferred alternative that is best for our community.

I have heard and fully understand concerns about impacts to our waterfront and residential neighborhoods. I recognize that the Hudson River is both our City's greatest treasure and potential threat to our community. For this reason, I want to be upfront that I would not support an alignment that would block access to our waterfront.  I am also extremely sensitive to the impact on residential neighborhoods. The concepts that have been put forward are ideas and starting points for a conversation, and we are following a legal process through which all concepts must be improved or changed.

One of the changes that I will strongly urge the DEP to explore is an alignment for option E that determines a different approach to the “T-Wall” along the walkway in front of the Hudson Tea Building. The alignment along Hudson Street or Shipyard Lane should be explored with a different tie-in to the waterfront that does not create a wall around the walkway and separate our community from the Hudson River.

Although there have been understandable fears about how these flood protection measures would impact our neighborhoods, the intent of this process is to develop a plan that integrates into our urban landscape. The rendering below, developed by OMA, the Dutch firm that led the Rebuild by Design competition for Hoboken, presents one possible idea of how we could both protect from future storm surges but also provide a community benefit with seating and plants integrated into a low-level flood wall. Deployable walls that are only put into place when emergencies arise are another option.

Legally, as part of the process to receive the $230 million in funding, three possible options will need to be explored further. I will be advocating to eliminate two of the waterfront alignments, in addition to exploring changes to the initial concepts that reflect resident concerns.

I invite our community to learn more about the project by visiting www.rbd-hudsonriver.nj.gov, to provide feedback by emailing rbd-hudsonriver@dep.nj.gov, and by attending the upcoming drop-in sessions: 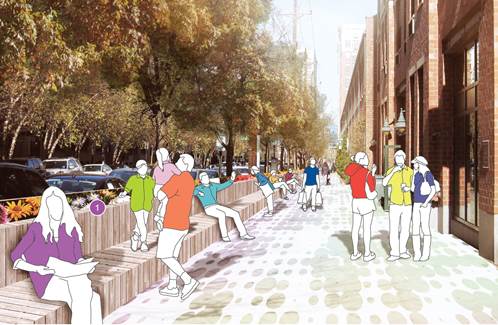 Posted by SmartyJones at Tuesday, December 15, 2015