One legal observer of the proceedings described the judge's findings of fact and legal opinion "a bench slap."

The defamation lawsuit was originally filed on July 26, 2012 but Councilwoman Beth Mason announced it earlier in reply to Roman Brice who requested she make available the public records of her Mason Civic League (Association) at the July 11th Hoboken City Council meeting.

In reply, Mason ominously threatened, "Mr. Brice is on the verge of some legal action."

Last September, the court threw out most of both Lane Bajardi's claims and all outstanding allegations of Kim Cardinal Bajardi.

As seen in the video report courtesy of John Heinis at The Hudson County View, Judge Patrick Arre said, "No evidence has been presented here that Mr. Bajardi's position as a radio broadcast journalist has been effected."

Defense counsel Alex Booth in an interview with Heinis after the lawsuit's dismissal said, "It's obvious to me from the start that Mr. Bajardi was heavily involved in politics here (in Hoboken) and was a big time supporter of Mrs. Mason."

Booth added, "There was no evidence to support a verdict against any of these people, so no surprise."

Booth concluded saying, "It was a victory for the First Amendment."

Heinis concludes his video report noting Beth Mason did not reply to a request for comment. 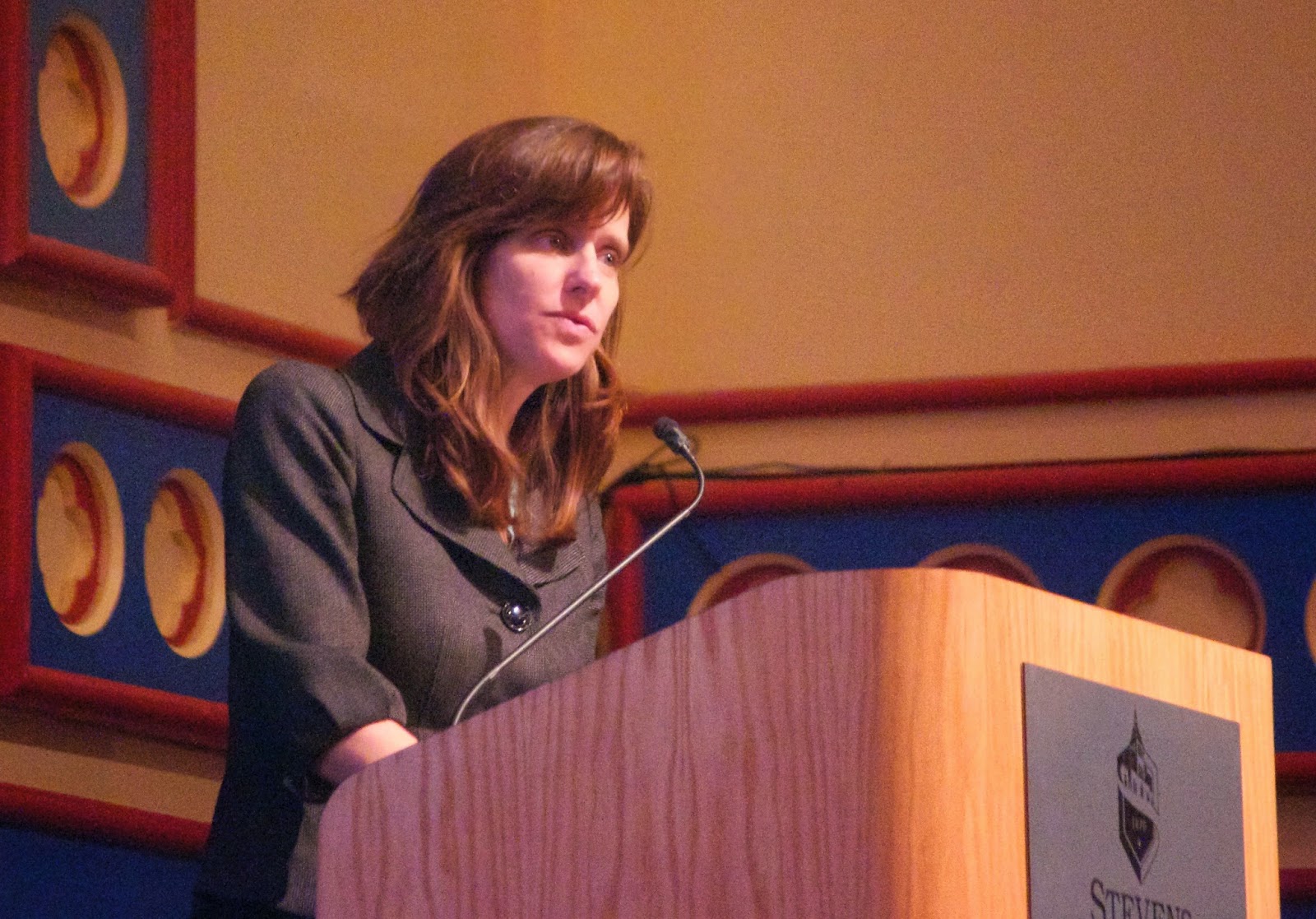 As Prepared for Delivery—

Good evening everyone. Thank you so much for coming out tonight. Thank you to President Farvardin for the introduction and to Stevens for once again hosting tonight’s event. Stevens is fortunate to have your strong leadership to continue to build upon a great institution. And I am thankful for the great relationship we have built over the years and for all of the ways we collaborate to improve the university and the city.

The state of the City of Hoboken is strong and growing stronger every day. The signs are everywhere. Pearson Education is bringing their headquarters and 900 jobs to Hoboken. Jet, an e-commerce startup that’s looking to take on Amazon, is also opening their headquarters along our waterfront this spring. A new independent bookstore will be opening up in May. We have the most active tech meetup in New Jersey. Mission 50’s co-working space is scheduled to triple in size with a new facility near our PATH.

Just in time for the 100 year anniversary of Frank Sinatra, the Sinatra Café will reopen soon with a new Italian restaurant called Blue Eyes. Hoboken was voted the best downtown in North Jersey.  We've got a new park under the Viaduct with the coolest lighting thanks to the County, and Hoboken has added batting cages for all our growing young athletes. The United Nations just recognized Hoboken as a role model for flood risk management – only the second role model city in the country after San Francisco.

All of these things are happening because Hoboken is an amazing place to live, work, learn, play, and visit.

So tonight, I want to talk about my vision for Hoboken and how we can build upon our already tremendous community. My focus this year and in the years ahead will be on three main areas: resiliency, infrastructure, and quality of life.

When it comes to resiliency, I must confess that I am obsessed with addressing the flooding. It may be because my house flooded or because my husband didn’t move our car. But as I reflect on it, the memory of the mountains of debris on our sidewalks is seared into my mind, and I just don’t want to see our City go through that ever again.

That’s why I am very proud that this year, with the help of many members of our community, we won the Rebuild by Design competition and $230 million to protect Hoboken and our neighbors in Weehawken and Jersey City from flooding. It is a historic opportunity to protect our city. For those who aren’t yet familiar with it, the Rebuild by Design plan has four components: Resist, to protect our shoreline from future storm surges, Delay and Store to manage storm water and prevent it from overwhelming our sewer system, and Discharge, to drain and pump the water back into the river in cases of emergency.

The funding for this competition will likely cover the Resist component of the plan, which uses the Dutch-inspired “park as defense” approach to protect our city from catastrophic flooding while making sure we protect our waterfront and access to our waterfront. It’s thanks to the hard work of many committed activists in our community that our waterfront is the treasure of our city, and this plan is designed to make sure it stays that way.

Tonight I want to especially highlight one of those activists who has done more than almost anyone to fight for our waterfront. For more than 40 years, she has fought for historic preservation, open space, sustainability, sound regional planning, and yes, the beautiful waterfront we enjoy today.

She is the founder and coordinator of the Hoboken Quality of Life coalition and is president of the Hudson River Waterfront Conservancy. Unfortunately she couldn’t be here tonight, but please join me in thanking Helen Manogue for everything she has done for Hoboken.

Helen has also agreed to be a co-chair of the Rebuild by Design citizen’s advisory committee that will play a key part in providing community input into this important project, so I thank her for taking on this critical role.

One of the exciting projects that I hope we can complete soon to build upon our amazing waterfront is a boathouse at Hoboken Cove. Through a public planning process, we’ve completed the conceptual plan, and it is my goal to get this boathouse built as the first phase of a “park as defense” plan along our border with Weehawken. This project demonstrates how we can combine flood protection with a community amenity with a boat house built into a flood berm.

A new boathouse has been a vision of the Hoboken Cove Boathouse organization for many years. Carter Craft was a co-founder of the organization and has served on the board since 2006. He also founded the Metropolitan Waterfront Alliance, and I’m glad that along with Helen, he has agreed to co-chair the Rebuild by Design citizens’ advisory committee.