From the desk of Hoboken City Council President Ravi Bhalla: 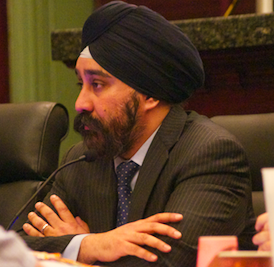 On Wednesday night, due to the "no" votes of Council Members Theresa Castellano and Beth Mason, a flooding solution for western Hoboken was voted down. The city secured a low interest loan to fund a flood pump uptown near 11th Street, which would help alleviate flooding on the west side of town, near the Shop Rite, which has historically seen chronic flooding.

“Council Members Mason and Castellano voted to support this flooding solution on December 16,” said Councilman Peter Cunningham. “However, Wednesday night when it was time to fund the project, they’ve proven that they can only provide lip service to residents when it comes to flooding solutions.”

“Even if the resolution passes eventually, I hope residents do not forget that Mason and Castellano took a stand against providing a sensible flooding solution funded through a low interest loan,” said Council President Ravinder Bhalla. “I don’t understand how these council members could in good conscience vote against a flooding solution that would improve the lives of so many residents.”

“Actions speak louder than words,” Cunningham said. “And when residents still have to pump water out of their homes or wade through knee deep water after a storm, I hope they realize that these two council members voted against a sensible solution.”

The following like MSV's exclusive February 17th story is compiled based on investigative reporting/analysis/opinion spanning years of MSV's coverage in Hoboken and attending hospital board meetings at HUMC.

Emails contained here are part of the public record obtained in over two and a half years of civl litigation in the well known lawsuit against this MSV editor and a dozen or more Hoboken residents. The documents numbering in the area of 100,000 including electronic data are available to the public at Hudson Superior Court in the case: Bajardi v Pincus.

The shadowy world of Councilwoman Beth Mason's numerous political operatives operating in Hoboken is highlighted in the attached email exchanges of their efforts to undo and stop the eventual successful sale of Hoboken University Medical Center in late 2011.

Back in early 2011, many in Hoboken watched helplessly as Hoboken University Medical Center hemorrhaged losses in the millions and then tens of millions. Mayor Dawn Zimmer who took office in mid 2009 was herself unsure what was possible to save the more than 100 year old institution founded in 1863.

The City of Hoboken had backed the hospital with $52 million in bonds back in 2007 in an attempt to stave off closure of the formerly named St. Mary's. Any hospital closure inclusive of winding down liabilities was thought to add possibly $20 million or more and lead to the City of Hoboken's bankruptcy and trigger municipal and public safety layoffs.

Many observers thought any effort to save HUMC doomed. Lane Bajardi in one of his innumerable ghostwritten Hoboken411 stories in early 2010 wrote, "Will the hospital close?" Pointing to mistaken information from the State of NJ officials saying HUMC would close "in the next few months" he gloated about Hoboken411's coverage, - his, calling it the "only source for in depth coverage of the "Cons" of taking over the hospital," in line with the previously held party line position taken by Beth Mason.

In late September 2011, Hoboken411 with a suspect Star Ledger story would announce the hospital's death with a gleeful morbid D.O.A. graphic. In the end, it would be another failed political operation as Hoboken411 and Lane Bajardi would be forced to eat their words.


Over months culminating with one last attempted act of sabotage in October 2011, Lane Bajardi along with other self-pronounced "Masonistas," a dwindling band of mostly paid adherents to a cult of Beth Mason would do their best to see undone the successful bidder HoldCo announced at a hospital board meeting in early 2011. The transaction's complexity was enormous and the institution in a state financial experts saw as unlikely to lead to a purchase by anyone.

(Best to read from the bottom up.)

Talking Ed Note: More to come on the organized Beth Mason sabotage to sink the HUMC sale and  "destroy the administration" of Mayor Dawn Zimmer.

This story is dedicated to the memory of Steve Rofsky, a Hoboken resident who was instrumental as part of a volunteer Hoboken hospital board in saving Hoboken University Medical Center.