The invasion of the Leper-Cons, redubbed by Hoboken bar sponsors as Hoboken St. Patrick's Day is once again passed but the improvement since 2012, the first bar crawl year is already hitting the record books.

And extended thanks to everyone who joined together working toward a better day: 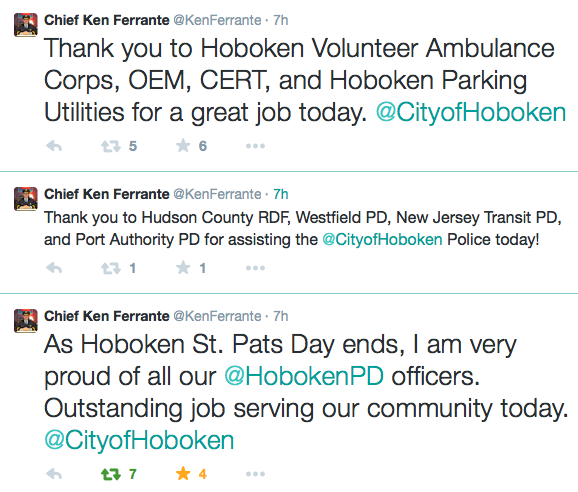 The unofficial numbers show arrests are almost down to single digits, eleven (11) with 100 ordinances issued.

Since the Hoboken version of the St. Patrick's Day Parade ended in 2012 with a disagreement between the parade committee and City Hall on moving the event to a weekday, predictions the first Saturday in March would degenerate have been proven unfounded.

On a year to year basis, the numbers of marauding invaders previously numbering in the tens of thousands has fallen year to year to far more manageable levels.

Update: Some additional data points on Sunday from NJ.com:

Arrests and ordinance violations this year are each down more than 67 percent from 2011.

Last year, police arrested 15 people, issued 63 summonses for ordinance violations and responded to 288 calls for service.
The number of calls for service this year was the highest since the number hit 400 in 2012, and still well below the high of 525 in 2011.
A raucous St. Patrick's Day celebration in 2011, when 34 people were arrested and 296 ticketed, led city officials to begin a crackdown on alcohol-fueled crime and safety issues during the event.

Talking Ed Note: The big objective figure here is violations and arrests are way down. Violations being down 67% from 2011 means the parade was the rocket fuel of a dog whistle driving people to Hoboken.

Those crying about the loss of the parade have showed a remarkable deaf and disparaging ear to the vast majority of Hoboken residents who said they had enough. These similar pro Old Guard voices claimed the lack of a parade would do nothing to the increasing numbers of mardi gras festivity and debauchery under a St. Patrick's Day Mile Square Banner.

Bizarre claims of anti-Irish sentiment at City Hall from the mayor's office went mostly unchallenged although one Irish group from outside Hoboken called the 2011 parade aftermath a disgrace urging its weekend cancellation. It did little to vent thought of change by the St. Patrick's Day committee who vented its spleen to the point where cries of racism were openly being directed at city officials in a typical Old Guard toxic display of overplaying a bad hand.

There's been no outcry from the Hoboken public and the more manageable problems in succeeding years directly countered the ugly hysteria among a distinct minority. None of these public safety concerns had anything to do with ethnicity, religion or St. Patrick himself for that matter.

In 2010, a MSV editorial noted the out of control escalation predicting "life or limb lost or an outrageous assault shocking this town to its senses." No one was doing anything substantial in City Hall to address an approaching disaster and the very next year appliances would fly out of windows at public safety, assaults would dramatically escalate with massive injuries finding their way to the local hospital. One report of someone suffering a severe head fracture was lost in the midst of reports of sexual assaults.

The following year the parade committee announce this ugly screed writing: "... we love our city too much to lower ourselves to the level of those who speak from a place of ignorance and ethnic/religious intolerance."

How much do you think a lawsuit(s) against the City of Hoboken might be today if that mayhem having nothing to do with St. Patrick was permitted to escalate and continue to a deadly outcome?

Thanks to all the hardworking members of the Hoboken Police Department on call yesterday, the Volunteer Ambulance Corp, OEM, CERT team members and everyone aiding with their contributions displaying Hoboken pride.

Special thanks to Hoboken Police Chief Ken Ferrante for his speedy highlighting initial data to the community and a big hat tip to his dedicated leadership team.

From the desk of Hoboken Democratic Chair Jamie Cryan:

"As Chairman of the Hoboken Democrats I will be enthusiastically supporting Annette Chaparro for State Assembly in the upcoming Primary Election. Annette has deep roots in Hoboken, has been involved in politics and community organizations here for many years and she will be an excellent representative for Hoboken at the state level. In addition, I am very excited to see the Hudson County Democratic Organization supporting both a woman and a Hispanic for the seat in Annette and she will be a great addition to our diverse and effective legislative delegation."