Hoboken411, the Perry Klaussen blog and cybersewer for Lane Bajardi's years long ghostwritten direction on political content right down to the headlines, photo placement, and jumps, has inevitably jumped the shark. Again.

As Hoboken411 is unveiled handing out personal information of registered readers to Beth Mason political operatives like candy; Perry Klaussen no doubt dreads further truths coming out in the thousands of emails with Lane Bajardi now public and in the hands of MSV and Grafix Avenger.

Last weekend, the disturbing misogynist delusions were no longer enough and he retaliated calling the mayor "the bitch in charge."


Perry Klaussen the blog owner of Hoboken411 is unraveling with the revelations he was a sock puppet to a years long Beth Mason censored political operation with Lane Bajardi as the political director controlling all details on ghostwritten stories.

One of the biggest defeats for Beth Mason and her political operatives were collective efforts to sabotage the City of Hoboken in the Municipal Garage sale. The buyer balked at paying an inflated price with the recession seeing a major drop in its valuation. As a result, the buyer would not follow through on a pending contracted sale.

In August 2010, the City held to its word evacuating the property temporarily until no check for well over $20 million arrived from the buyer who backed out. A political operation to stop the City from using a tempoary site was a major Old Guard council effort to cause a hefty lawsuit from the buyer and lay the blame at the foot of the mayor's adminstration. In this email, Hoboken411's Perry Klaussen shares with Lane Bajardi a communication with Beth Mason on the latest effort not leading to "much."


Lane Bajardi's tentacles into Hoboken411 didn't extend to only political content. Holding numerous screen names (against Hoboken411's stated policy), he was issued more at the drop of a hat in an attempt to influence public opinion on matters of public concern.

Moderation on Hoboken411 was a part of their discussions: 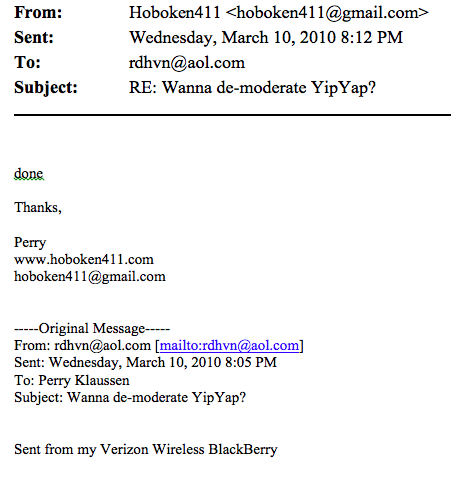 Other political communications between Perry Klaussen of Hoboken411 and Lane Bajardi were more rabid.  In the email below, they both call a Hoboken woman the "c" word. A true and original email between Lane Bajardi and Perry Klaussen follows. An identifying name has been edited out. 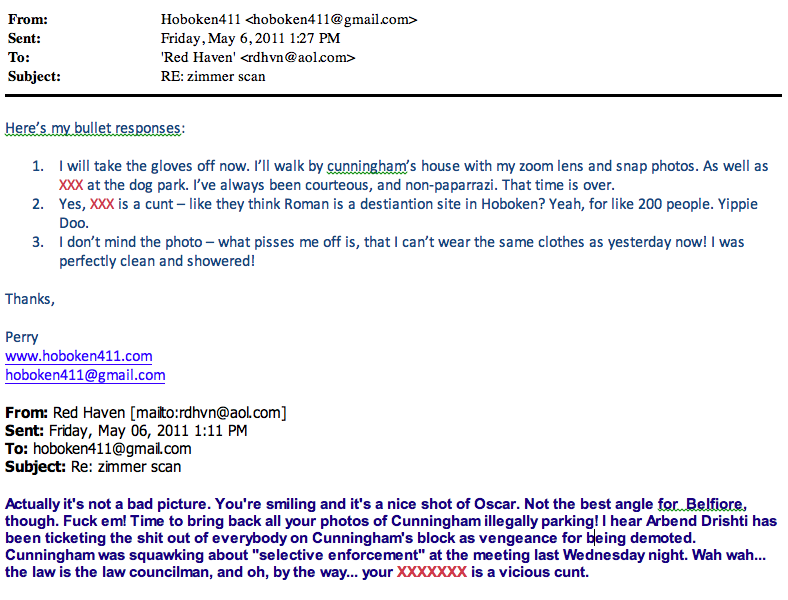