Old Guard sources echoed the story "Beth Mason crashes and burns as the Old Guard eats it own," deciding in a recent closed door meeting they'll be getting behind BoE trustee Peter Biancamano for the second ward council seat come this November.

In turn, Mason is expected to be handed a bone for the Mason family's largesse through numerous political operations and election underwriting with a ceremonial position as Hoboken Democratic Chair after the committee election in early June.

In the weekend Hudson Reporter's "Between the Lines" column, it stated "rumors" say Beth Mason "may have higher ambitions." How is that exactly news?


Mason has previously attempted to "hitch" her political wagon to other elected figures, all ending in failure. She printed signs in the November 2009 election when Jon Corzine ran for Governor with both their names together infuriating his campaign people as both went down to defeat.

When NJ Senator Frank Lautenberg passed away in 2013, Beth Mason attempted to create interest in herself saying NJ Democratic leaders wanted her to run. The ludicrous claim was laughed off by the entire state as former Newark Mayor Cory Booker eased in to the statewide position in the succeeding election.

The Lautenberg flap showed the Mason Media Complex inert acting on her behalf. Her efforts to reportedly bid seven figures with the family checkbook for the Hoboken's Assembly seat two years ago even disturbed hardened decades long Hudson County political observers reminding many of the Blaggovich affair.

Unable to buy any political office in northern Jersey, Mason resorted to aligning against neighboring interests extending the Mason family checkbook to one potential Governor candidate in NJ Senate President Steve Sweeney. But her massive election violations in the hundreds proved a bigger embarrassment and overshadowed the noise she could be a contender for Sweeney's Lt. Governor slot.

To universal laughter, this is what Beth Mason's chief political operative FinBoy cooked up after MSV exposed the Old Guard November strategy in the making last week.

Since Hoboken voters twice convincingly rejected Beth Mason for mayor in 2009, she's splashed (illicit) tens of thousands of dollars to NJ Democratic organizations, congressional, freeholder candidates and a rumored seven figure offer for the Hoboken Assembly seat all in the vain hope to buy her way up the political ladder.

Mason's vast unpopularity and upside down unfavorable ratings made it all but impossible for her to mount another run for mayor in 2013. Unlike Councilman Michael Russo's new found decorum, she's done nothing to rehabilitate herself to Hoboken voters.

Beth Mason's underwriting of the disgraceful Nazi Truck in the 2012 Move Forward BoE campaign garnered Hoboken repugnant national attention in the use of a swastika being paraded on a video truck all over Washington Street and in front of a BoE and City Council meeting. Both Mile Square rabbis publicly asked for an apology. Beth Mason ignored them.

The Mason family's seven thousands emails and years long unreported, shadowy ties to Lane Bajardi and Kimberly Cardinal Bajardi in the two and a half year long civil case against a dozen Hoboken residents further polarized Hoboken voters against her.  Her underwriting of the Doyle litigation in 2012 costing Hoboken tens of thousands of dollars in needed resources after Hurricane Sandy showed her consistent political tone deafness a terminal condition.

With next year's presidential race already underway, Hillary Clinton has bigger fish to fry and is fighting off another brewing scandal revealed in a blockbuster book pointing to the Clintons cashing in on foreign government loot when she was Secretary of State. The Clinton campaign is reportedly seeking a record smashing $2.5 billion in campaign funds for her presidential run. Any interest in Beth Mason would come in the form of a hefty six figure check and an ambassadorship to Togo.

Why the Hillary Clinton campaign would remotely care about Beth Mason's "early hop" on the bandwagon is unstated in the Hudson Reporter. There's not a single major Democratic candidate on the horizon prepared to announce against Hillary Clinton's preferred coronation to the Democratic party nomination. The Hudco machine will dutifully announce its support in due course regardless what one (of nine) Hoboken council members says or does.

While Hoboken and Hudson County officials are no doubt clucking at the absurd notion in the Hudson Reporter, it's only the Old Guard rag's latest effort on behalf of a former heavy advertiser and rumored business partner. (The HR editor won't respond to that or any query.)

The hysterical spinning by paid political operatives is all about to come to naught even as Beth Mason reportedly once told her own campaign manager, "What's the point of being the second ward councilwoman."

To date, the Hudson Reporter hasn't breathed a word on any of the damning emails by Beth Mason and her sad sack army of political operatives in the spectacular backfiring of the Bajardi v Pincus civil litigation. Many in Hoboken remain deeply fearful of what's contained in the tens of thousands of emails now in the hands of MSV and Grafix Avenger and any impact in the November elections.

That as the facts stated above are not symbolic of Hoboken's historical political cesspool but cause for the existent fear and trepeditation. Continuing email revelations on MSV and Grafix Avenger expose the dark underbelly of Beth Mason and her nefarious political operatives. In one 2012 trial involving another Mason political operative, a Union City judge described his findings "disturbing" and "Hudson County dirty politics."

Back in 2011, in a true, complete email with Lane Bajardi, Sara Stojkovic, James Barracato pointed to the uptown Applied Buildings as Beth Mason's salvation as she had lost all intrinsic support in the Second Ward. 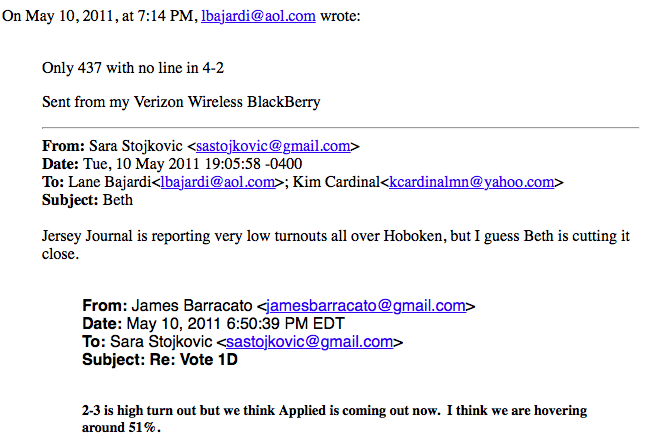 Talking Ed Note: The only upcoming political date of import on Beth Mason's calendar is May 28 when her allegations of victimization are heard against this editor in a scheduled trial in Jersey City Municipal Court.

More than a few in the Hoboken Reform movement wish Beth Mason would run in November. No one believes new Mason record setting street money efforts will sufficiently compliment the historical arm twisting for votes in Applied Housing buildings.

None of that matters now; the Old Guard has moved on.