One question arose over the weekend in the comments section about any connection to the Vote by Mail machine, a staple within the Hoboken Housing Authority at election time.

From the 2013 mayoral race, one name stands out in the Hudson County VBM report:

In 2011, Julian Braxton is listed as the recipient of $250 for his "campaign work" on behalf of the Beth Mason campaign for her council re-election in the second ward.

On Friday, Julian Braxton was listed as arrested for multiple counts of drug distribution. According to a 2013 Hudson County Vote by Mail report, his home address is 310 Jackson Street. Bail amount was not immediately available.

The same address is highlighted for Ramona Braxton, Robert Braxton and Arlette Braxton: 310 Jackson Street. All four ballots handled by vote messenger Dio Braxton were nullified due to voting irregularities not identified in the county report.

The Hudson County Board of Elections implemented a higher standard of scrutiny on the Vote by Mail ballots in the 2013 election.

She is believed to be the grandmother of Julian Braxton.


Related: Support for Carmelo Garcia when he was Executive Director was captured in this first hand May 2014 feature story.

Arlette Braxton is mentioned in the story for her remarks after an outburst by another HHA resident.

Talking Ed Note: MSV recently noted the positive impact under the leadership of HHA Chair Dana Wefer and Police Chief Ken Ferrante. The tangible efforts of both are coming to fruition and the community needs to continue its support of their efforts.

The Hoboken Housing Authority will be holding its annual reorganization meeting this Thursday at 221 Jackson. Dana Wefer is thought willing to continue to serve an additional year as chair.

Common sense suggests it should be a unanimous vote.

Will anyone be asking Beth Mason what services she paid $250 for to fourth ward resident Julian Braxton?


Beth Mason's Facebook took great pride about something called a "good neighbor" award.
Beth Mason in the second ward is a good neighbor to the fourth ward according to the local NAACP? 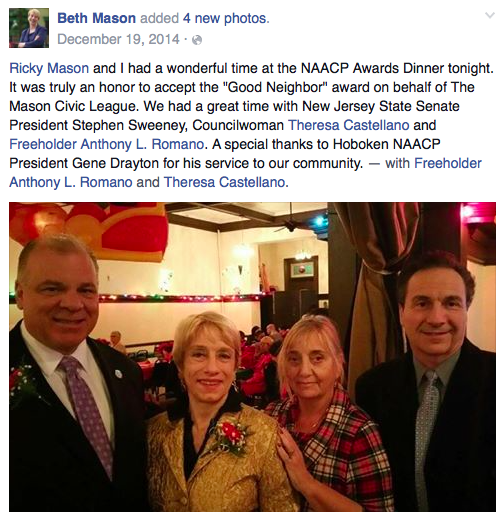