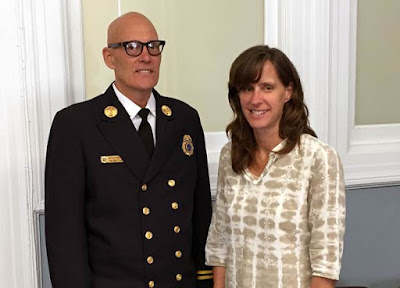 "We are fortunate to have great talent and many qualified leaders in our Fire Department," said Mayor Dawn Zimmer. "I thank Chief Peskens for agreeing to take on this major responsibility for the next several months as we begin the process of identifying a permanent Chief to lead the department in the years ahead."

A swearing in ceremony will take place ­­­­­­­­­­on Tuesday, June 23rd at 3:00pm in City Council Chambers. All members of the public are invited to attend.

Hoboken Fire Chief Richard Blohm retired on June 1, 2015. The department has been operating with an officer in charge for several weeks. Once Civil Service administers the Fire Chief’s exam and publishes the results, the Administration will interview candidates for the position of permanent Fire Chief.
Posted by SmartyJones at Tuesday, June 23, 2015
Mayor appoints Battalion Chief Anton Peskens as Provisional Fire Chief
2015-06-23T08:22:00-04:00
SmartyJones
Comments