Mere weeks ago, Beth Mason the controversial and unpopular occupant of the Second Ward council seat released a public threat to her Old Guard allies via her typical route via the Hudson Reporter.

Besides the threat coming after the candidate filing deadline, the Mason threat made public revealed that behind the scenes, her Old Guard allies were turning their backs on her demands and the family checkbook even as a decisive November council election looms not far in the distance.

Last week, Beth Mason made known to the public her newest threat. After the fiasco of the Hoboken Democratic Committee meeting, Mason left in a huff but she hasn't given up her quest to be handed a local party title.

Now Beth Mason is desperate to get a purely ceremonial title: honorary chair.

With the top prize of Democratic Chair already voted to the compromise candidate in Freeholder Anthony "Stick" Romano, Mason reportedly attended the meeting expecting to be given the title, "Honorary Chair."

Initial reports elsewhere claimed she was handed the position, at least one suggesting she shared the title of co-chair with the equally toxic and controversial Carmelo Garcia, Hoboken's outgoing Assemblyman.

MSV however refused in its extensive series on the local party activities to concede any such action had been voted upon or taken. Romano eventually confirmed the issue was open to evaluation either by an upcoming vote or assignment in a future meeting after legal review (unscheduled at the moment).

All of this out in the open push and pulling with her very public humiliation has Beth Mason seething.

Several people who had once been allies independently spoke to MSV on the condition their names not be made public. To a person they all showed disdain for Beth Mason's latest threat to obtain the title of "Honorary co-chair" and run her own council ticket this fall.

In the near term, the Hoboken Democratic Committee will hold another get together to vote at least for one if not more positions of Vice Chair. Most importantly, it'll act to satisfy the condition of its bylaws requiring one man and one woman to sit atop the two top positions.

One reliable source grew agitated when asked about what Beth Mason might expect to get at an upcoming meeting. "Listen, Beth Mason ain't getting honorary anything!" Their tone was definitive, exasperated and without question final.

While last weekend's "Between the Lines" column declared this the most contentious issue in a continuing factional political battle, the finality of the statement appeared apparent.

Another independent source intimate to the wrangling over months by Mason to be handed a party title saw last weekend's HR column as nothing but Beth Mason and her people "feeding things" in a desperate attempt to make herself look "more relevant" echoing the words of an early shot taken by the former Hoboken Chairman when MSV first reported the battle royale for Hoboken Democratic Party itself last April.

That source also expressed disdain for any council election effort Beth Mason would mount: either for herself or a council slate in November. Concluding on the entirety, this long time political player in Hoboken was non-pulsed about the matter.

"No shot," said a third source who viewed any Beth Mason ticket mounted in the fall as a complete non-starter. The view being if there's one way to energize Reform and the Hoboken public against you, it's having a campaign and candidacy with Beth Mason's name attached.

As far as the Old Guard is concerned, Beth Mason is kaput and her earlier bluff already called.

One observer removed from both the Old Guard and Hoboken Reform noted Beth Mason's series of tantrums saying she remains on the path to learning there are things money can't buy.

One can only wonder if Beth Mason and the family checkbook are currently vetting another of her infamous lawsuits. But if she sues the Old Guard for a refund, she's only likely to get a big yawn.

Hoboken's Old Guard has moved on. 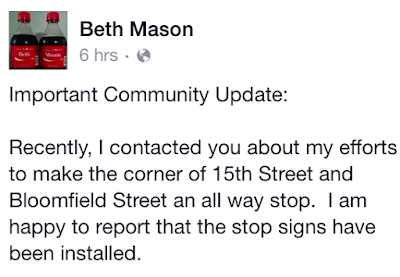 Communications at the Hudson Tea Building, the location of the new stop sign however paint a different picture to the alternate universe Beth Mason would have the Hoboken public believe.

According to an email circulating in the Hudson Tea, it was their resident voices working with Mayor Zimmer and the administration which drove the outcome leading to the new STOP sign.

Among those credited in the Hoboken Tea Building residents email other than Mayor Dawn Zimmer who is described as making pedestrian safety "one of her priorities," the building's email credited at-large councilman Ravi Bhalla, Fifth Ward Councilman Peter Cunningham, John Morgan, Director of Transportation and Parking, Gary Holtzman, Chair of the Hoboken Planning Board, Stephen Marks, Hoboken Municipal Manager and Andy Hipolit, an engineering consultant to the Hoboken Planning Board.

Nowhere is Beth Mason mentioned as doing anything to aid in obtaining the stop sign. Mason certainly may have made comment in a recent council meeting but doing any actual work - based on the residents email - the answer is zero.

One can imagine the Hudson Tea residents remembering all this and more come November.