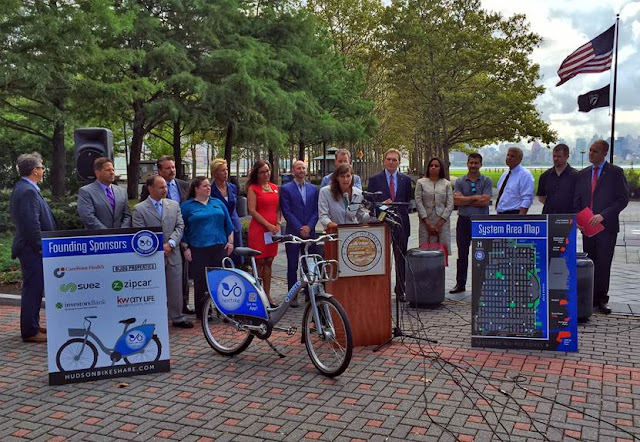 The City of Hoboken, in partnership with Bike and Roll, nextbike, E3Think, and P3 Global Management, and, is announcing the pre-sale for Hudson Bike Share, a Hoboken-based regional bike share program, in advance of the planned launch in September. Beginning today, residents and visitors can immediately register for annual memberships by visiting www.hudsonbikeshare.com or through the nextbike mobile application. Annual memberships purchased before the launch will cost just $75 – a $20 discount off of the regular $95 annual fee.

The first phase of the program will feature 250 bicycles with next-generation "smart-bike" technology and 29 official stations in Hoboken. Users may ride anywhere within or outside of Hoboken during their rental. In addition to the 29 official stations within Hoboken, this first-of-its-kind program will permit riders to connect to regional transportation options and make longer visits to neighboring areas by allowing them to return and rent bikes from several locations outside of Hoboken without added fees. Thanks to on-board GPS technology and an integrated cable lock, riders will not be charged a fee for returning bikes to any legal bicycle rack within designated ‘Regional No Fee Zones’ outside of Hoboken. Bicycles that are not returned to official stations will be charged a $10 fee within Hoboken and $25 fee outside of Hoboken, with the exception of designated Regional No Fee Zones.

“We look forward to launching this cutting edge, next-generation bike share system which we believe represents the future of urban mobility," said Mayor Dawn Zimmer. “Whether it’s part of your commute, to run errands, or just for recreation, bike sharing will provide a healthy and sustainable option to get around Hoboken and our area. Bike sharing should be accessible and affordable to everyone, and with 29 stations throughout our mile square city, no resident will be more than a 3 to 5 minute walk from a station. Thanks to the support of our sponsors, we will also be providing free and discounted memberships to residents of the Hoboken Housing Authority. And through a partnership with the Hoboken Shelter, we will be providing training and creating jobs to help some of our homeless residents gain employment and become more independent.”

The program will be operated by Bike and Roll, the largest bike rental company in the United States, and will use bicycle technology manufactured by nextbike, which has the largest international bike sharing network with over 25,000 bicycles in more than 80 cities in 15 countries.

“Bike and Roll is pleased to be operating a truly regional bike sharing program, featuring the most advanced technology, and to be partnering with the City of Hoboken to ensure that a world class level of service is provided,” said Bike and Roll CEO Chris Wogas. “Once again Bike and Roll has proved to be at the forefront of the cycling world and is happy to be working with Mayor Zimmer to advance bike sharing systems for everyone.”

“We are very proud to be the technology and operating partner for Hudson Bike Share,” said Sebastian Schlebusch, Director of International Business Development of nextbike GmbH.” After ‘Healthyride’ Pittsburgh, PA, ‘SkyBike’ West Palm Beach, FL and ‘Flash Fleet’ Kent University, OH, Hudson Bike Share will be the 4th smart bike system we are launching in the United States in 2015. We thank Major Zimmer for her dedication and continuous support to realize this project.”

“Hudson Bike Share is a true public private partnership,” said Carlos Pujol, CEO of P3 Global Management. “Mayor Zimmer has been an incredible advocate for this program and the people of Hoboken. The engagement between the Mayor’s office and the Hudson Bike Share team to build a true coalition of corporate and not-for-profit partners is an excellent example of how the private and public sector can partner together to provide innovative new services at zero-cost to tax payers.”

“Hudson Bike Share is a significant step forward for bike share for mid-sized cities,” said Tom Glendening, CEO of E3Think. “Not only is it 100% privately financed, but it is built on an advanced technological platform that can evolve, can be the basis of new shared urban mobility, and can be an economic driver.”

“As a member of the Hoboken community, we are proud to be a founding sponsor of Hudson Bike Share,” said CarePoint Health System CEO Dennis Kelly. “With a large number of our employees living and working here, we are excited to help improve the quality of life in one of the places we call home.”

“We’re thrilled to be part of the launch of Hudson Bike Share in Hoboken and congratulate Mayor Zimmer and the City Council for their tireless efforts to bring this popular program to the City,” says Larry Bijou, managing partner of Bijou Properties. “As a local developer, we share their desire to create a more eco-conscience environment in Hoboken and have spent fifteen years firmly dedicated to introducing environmentally-responsible and pedestrian-friendly developments that promote healthier, cleaner living within the City. Hudson Bike Share fits perfectly into the green culture of Bijou Properties and the ongoing neighborhood enhancement in Hoboken by reducing traffic and congestion and encouraging a more active lifestyle. We’re delighted to support this program and help this City grow into one of Hudson County’s most cycle-friendly destinations.”

“The City of Hoboken, under Mayor Zimmer’s administration, has established a reputation as a leader in ‘green’ initiatives,” said Nadine Leslie, president of Suez North America. “Suez North America is excited to help this reputation by supporting Hoboken as a lead sponsor of the Hudson Bike Share.”

“Zipcar is excited to sponsor Hudson Bike Share as bike sharing and car sharing are truly complementary to one another,” said Anthony Fatone, regional general manager, Zipcar NYC. “Both enhance the quality of life for city dwellers by providing cost-effective alternative forms of mobility. We routinely hear from our members that they like to bike to and from work, or a commuter train station, and use Zipcar on the weekends for those occasions when they need a car.”

“Investors Bank is proud to support the City of Hoboken’s new bike share program,” said Investors Bank President and CEO Kevin Cummings. “We hope this new initiative will provide residents and visitors with an easy and fun way to get where they want to go.”

“We at Keller Williams City Life Realty are thrilled to be involved with this environmentally supportive, Hoboken-based project promoting the livability of our urban community,” said Renée Condon, Broker/Owner at Keller Williams City Life Realty. “Forward-thinking concepts like this make a difference in our daily quality of life. We are honored to be chosen as the exclusive local real estate company and intend to promote it to our clients, agents, friends and family. “

The system will feature “smart bikes," the next generation of bike share technology. Whereas traditional bike sharing systems rely on a "smart dock" approach for storing bicycles, which requires expensive infrastructure for docking stations, the "smart lock" approach features bicycles with built-in locks, GPS, and communications equipment, providing increased flexibility at a fraction of the cost. A common challenge with traditional bike share technology is the inability to return a bike at a station that is full, however even if a station is full, Hudson Bike Share members will have the ability to lock up at any standard available bike rack that is nearby or to lock the bike to itself and leave it next to the station.

The system will feature four stations with smart docks and kiosks at high-traffic locations along with 25 stations using standard bicycle racks.

Pricing options will include annual memberships along with weekly and daily passes. Annual memberships will cost $95 and include unlimited 45 minute rides. Additional fees will apply for exceeding the allotted time. Customers will be able to register online at hudsonbikeshare.com, using the nextbike smartphone application, or at solar-powered kiosks at select stations. Members will be able to rent a bicycle via the nextbike mobile application (iOS, Android, Windows), with a smart card, at kiosks, or phone call via an interactive voice response system. 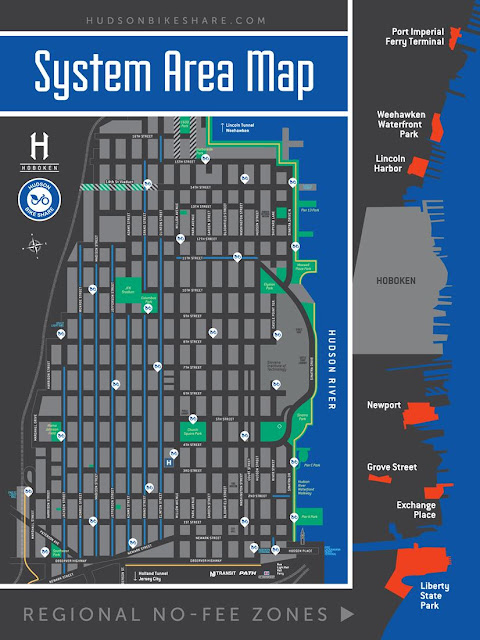 In a developing investigation first reported on Grafix Avenger, a shady Weehawken bar thought managed by Councilwoman Beth Mason's senior political operative, James "FinBoy" Barracato is the subject of questions including its ownership.

Beth Mason is listed as a "general partner" in a state entity filing holding an unknown interest in Cooper Place, a Weehawken based bar since at least last year.

Mason who has not been seen at any public council meeting since last month's electrifying Hudson Superior Court decision concluding the three year Hoboken SLAPP-suit she publicly backed against a dozen Hoboken residents, (Bajardi v Pincus) is listed as a "general partner" of the Weehawken dive bar.

Long time Beth Mason political operatives, Lane Bajardi and Kimberly Cardinal Bajardi were ordered to pay the dozen Hoboken residents $276,000 in legal costs for a frivolous litigation. The court described the Bajardi civil suit as a "SLAPP-suit disguised as a defamation case."

Mason herself has not made any public remarks about the highly reported First Amendment case since the final verdict issued by Judge Patrick Arre. Reports among uptown residents of Applied Housing suggests she returned to Hoboken recently and is making plans to run for re-election.


The controversial councilwoman, a virulent opponent of Mayor Dawn Zimmer and the Hoboken Reform Movement aligned with the Russo Clan back in 2009 in her first doomed run for mayor. She dropped out of sight last month missing four consecutive City Council meetings and lives in a multi-million dollar home on a hill overlooking upper Hudson Street. Questions why she's a business partner in a Weehawken dive bar are the latest in a series of seeming unending questions on her conduct and behavior as the sitting second ward council member.

Last February, in limited testimony at the Bajardi v Pincus SLAPP-suit trial, Mason offered James Barracato was her "business partner" who she "pays." She did not describe details of their business partnership.

In a MSV exclusive, James Barracato aka FinBoy was revealed last February as the mastermind of the Nazi Truck, a vehicle with four screens parading an attack video against Mayor Zimmer and Reform featuring a Nazi flag all over town on two consecutive nights in 2012. A public request by both local rabbis for an apology was ignored.

Barracato's name surfaced in a Hoboken City Council meeting when Councilwoman Terry Castellano was unwittingly revealed adding his name in place of Mason's in an emailed request for litigation information of Hoboken's Corporation Counsel. Castellano would say she hit "the wrong button" as a reason for Barracato appearing on the request listing Old Guard council members.


A recent rumor suggested James Barracato was in hiding from service of legal papers in Weehawken and Hoboken at the site of the Mason Civic Association, a Mason claimed charity where he also sits as one of three board members with Mason and her husband, Richard Mason of Wachtell, Lipton, Rosen & Katz.

Emails numbering in the four digit range obtained in the Bajardi v Pincus litigation offer evidence for a reasonable belief Barracato could be a co-conspirator in what the court in the end declared approaches a "fraud upon the Court."

Some of the bombshell emails have been exclusively published on MSV and Grafix Avenger, most recently here and here.

Talking Ed Note: Beth Mason was not contacted for comment on this story as a pending criminal trial related to the SLAPP-suit filed by her against this editor last fall is scheduled September 9th in Jersey City.