Michael DeFusco on the Municipal Garage: let's work together to find a solution

Taking dead aim at his election opponent, Councilwoman Terry Castellano, his criticism noted she was incapable of working with the administration to find a workable solution. Castellano has been a vehement critic and opponent of all things Hoboken's Mayor Dawn Zimmer and came within an eyelash of seeing Hoboken University Medical Center shut crippling the City's finances and losing more than a thousand jobs in Hoboken.

DeFusco says he'll bring a new energy to the position and can work with the administration and others something he infers clearly his opponent can not.

He also voiced support on behalf of acquring the six acres BASF site for a Hoboken park.

Castellano is seeking re-election in November which would bring her to potentially a quarter century in the office.


Related: In 2011, MSV attended and live blogged the critical meeting for a bond to keep the Hoboken hospital open.

It's unforgettable Councilwoman Castellano began the remarks of the council in a plea from Mayor Zimmer by saying there were "other bidders" while the hospital was running on fumes.

The claim of other bidders was nothing more than a frivolous fabrication.

This report comes courtesy of the Hudson County View:


The Hoboken Housing Authority unanimously approved a $157,000 contract for a new, full time executive director from out of state, tentatively set to start on October 28.

After a roughtly 45-minute closed session, the HHA board unanimously approved (4-0) the hire of Marc Recko, the current CEO at Washington and Mid-East Regional Housing Authority in North Carolina.


Unrelated: The Board of Education's November race for three seats is underway. Tom Kleupfel is running for re-election with two candidates: Sheillah Dallara and Adys Velez on a ticket called "Reach Higher." Kluepfel was originally elected on the Kids First ticket.

They're holding a kickoff this Sunday and launched a new Facebook page:
https://www.facebook.com/ReachHigherHoboken?notif_t=fbpage_fan_invite

From the desk of Councilwoman Jen Giattino: 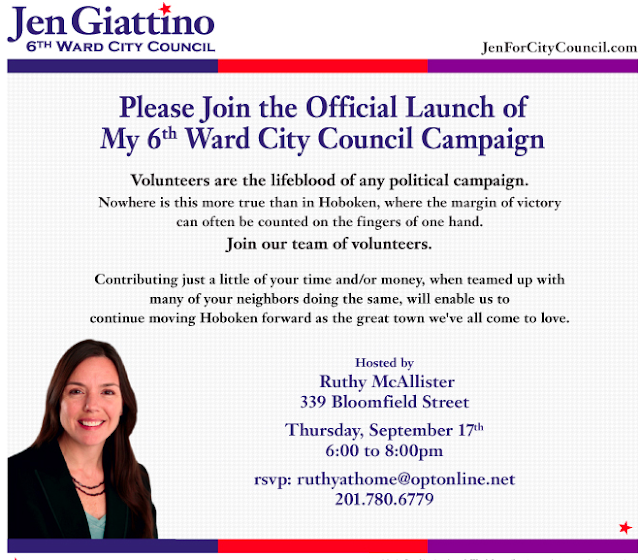 
'Do the developer deal!' Where has Hoboken heard that one before?

In the decades leading up to its current popularity as a developer destination, Mile Square development - through the mid-eighties arson induced murders killing dozens of residents, mostly women and children - to the broken promises to build a swimming pool or tennis and parking at the site of the litigated Monarch Project site; Hoboken has seen more than its share of broken developer promises and tears.

In Hoboken however, selling out the community is a time honored political "tradition." Whether its broken promises, broken lives or scams like the Carmelo Garcia brochured flimflam Vision 20/20, development deals promise riches and political support from the usual corners.

So when Eduardo Gonzalez, the Carmelo Ticket's fifth ward choice for Hoboken City Council made his recent pitch, the question immediately arose - who is spilling their guts about confidential negotiations going on between the City of Hoboken and international corporation BASF?

At the last City Council meeting, Eduardo Gonazalez the former Hoboken Housing Commissioner and steadfast vote for all things Carmelo Garcia arose in public portion to raise the idea of a developer trade.

According to Gonzalez, BASF which hold the last six contiguous acres in northwest Hoboken for both a large-scale public space and potential municipal parking garage, the cost of eminent domain and any resulting litigation expending and adding to the city's bonding totals of approximately $140 million is wasteful.

All fair game. What Gonzalez raised next however made eyebrows lift and question who is again leaking information on confidential negotiations between the City and BASF?


"From my understanding, BASF offered to donate the four acre main parcel at no cost to the Hoboken taxpayers in exchange for zoning relief for the remaining two acres..."


The reaction by Councilman Dave Mello was immediate raising concern on how Gonzalez would obtain confidential information? With the tens of thousands of emails obtained in Bajardi v Pincus, numerous discussions showed the Old Guard and its City Council political operatives regularly taking confidential information from the administration and using it for political operations.

MSV confirms as much with Grafix Avenger and showed the ties between the Old Guard council and the leaks which were coordinated for propaganda purposes on Hoboken411.

After Councilman Dave Mello raised the red flag, an eerie silence came over the remaining members and not a word from the usual leading suspects: Theresa "I hit the wrong button" Castellano, Michael Russo or Beth Mason.

The issue was overlooked for obvious political reason in the weekend paper, the pro-developer pro-Old Guard and anti-Reform rag Hudson Reporter. In an email exchange, Gonzalez attributed the information to "gossip."

Following this questionable revelation, Elysian Charter held a ribbon-cutting ceremony last week to celebrate its new location uptown. Gonzalez who sits atop its board is seen by some angry parents as responsible for inviting and giving a political speaker's platform to the Carmelo Ticket head in Carmelo Garcia who is considered a gasbag and shady by many.

While Gonzalez denies he's the culprit, Councilwoman Jen Giattino who is an Elysian Parent is said not to have even been invited to either the event or as a speaker even as all her children have attended the school for years.

Election season has officially begun in Hoboken and six ward council seats across the Mile Square are up for grabs along with the legislative majority.


Talking Ed Note: Word about town suggest Carmelo Garcia, a lame duck one-term Assemblyman is using his printer to issue "proclamations" to whoever he can in his bid to strip Councilwoman Jen Giattino of the sixth ward council seat.

In addition to Elysian receiving a "proclamation" by Garcia, notable and venerable other institutions such as a local bar in the sixth ward also make the cut. Next on the Garcia proclamation parade list, two guys who live around the block from him who are proclaimed "two sexy for their shirts."