Carmelo Garcia, no stranger to controversy is seeing some of his problematic associations sprung out of the sewer of the fourth ward show up in the sixth ward council race.

Garcia who is currently suing both the Hoboken Housing Authority and the City of Hoboken for the former's terminating an at-will contract in his infamous "ethnic cleaning" lawsuit is attempting to unseat Councilwoman Jen Giattino in the sixth ward of midtown Hoboken.

A recent Facebook entry to announce a Happy Rosh Hashanah saw questions raised about his paid Assembly staff and racial remarks cited in detail by a user called Hoboken Onion.

The remarks by those closely associated and paid (with taxpayer money) by Garcia are highlighted in detail from an actual screen shot of his Facebook page. 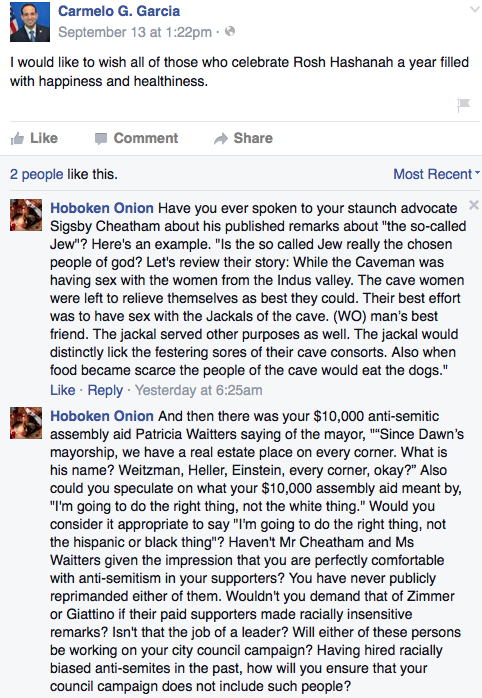 Putting aside the holiday wish for "healthliness" from the claimed Harvard educated Garcia, his council candidacy is troubled with his associates who unleashed anti-Semitic and racial venom in public meetings and later renounced any apology (allegedly written on their behalf by another taxpayer paid aide in former Hoboken resident Chris Campos in a letter to the Hudson Reporter).

Campos earns $40,000 annually courtesy of Hoboken and NJ taxpayer and Patricia Waiters earned $10,000 before leaving the post and renouncing his alleged ghostwritten apology.

Garcia swept aside the troublesome remarks of his close supporters and handpicked aide by saying he was in the bathroom during its occurence and nothing happened on taxpayer time.

Apparently, Carmelo Garcia has no problem with any of this or suing Hoboken residents while asking them to pay him more of their hard earned dollars to "represent" them.

A peak at the overall Carmelo G. Garcia.

Join Us for the Reach Higher Hoboken Campaign Kickoff Party!

Please join us on Sunday, September 20th, to kick off the Reach Higher Hoboken school board election campaign!

Current board member Tom Kluepfel is running for re-election. He is joined by Sheillah Dallara and Addys Velez, two energetic and committed district parents.

They seek your support to continue the steady progress made over the past several years. Strong public schools improve the quality of life in our city, and spending wisely and investing our tax dollars in the classroom provides priceless opportunities to Hoboken’s students.

We look forward to seeing you at the kickoff! 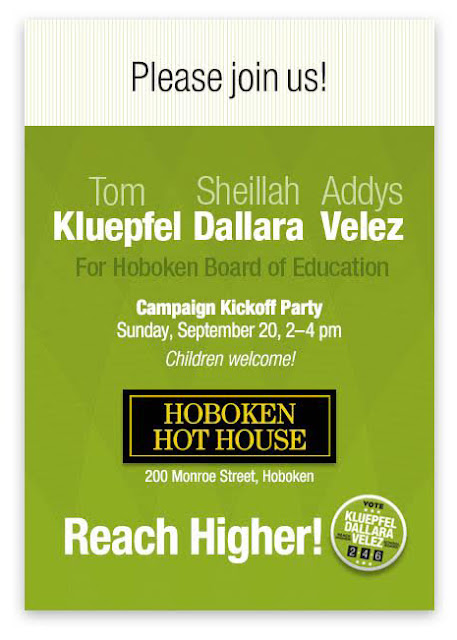