Corea was convicted and sentenced to serve seven years in state prison for his role in the theft of approximately $900,000 worth of Hoboken Parking Utility quarters in April 2012. The quarters were trucked out of Hoboken to a mob connected south Jersey arcade firm.

Last year, MSV exclusively reported in its "Grist for the Mill" rumor column John Corea was spotted in Hoboken and believed out of prison on a work release program.

In the video released earlier by the Hudson County View, John Corea is seen standing behind Peter Biancamano and enjoying a humorous moment when teased by Councilman Michael Russo.

Asked about Corea involvement on his "team" to be elected to the second ward council, Peter Biancamano offered via text, "All I'm saying is, you have over 60 residents of the ward there and it was a great night."

A phone interview with Freeholder Anthony "Stick" Romano confirmed he had not seen Frank "Pupie" Raia, the third ward council candidate who ran with Biancamano as council at-large candidates in 2013 at the event.

On the question of John Corea's attendance, Romano said, "He's a citizen... I have no comment."


The Tiffanie Fisher campaign could not be reached for immediate comment.

The full video from the Biancanmano event shows Corea in the background through the remarks by Romano and Biancamano.

According to the NJ Department of Corrections records, John Corea was released on parole last April 1st having been admitted originally April 2, 2012 serving three years of his seven year sentence. 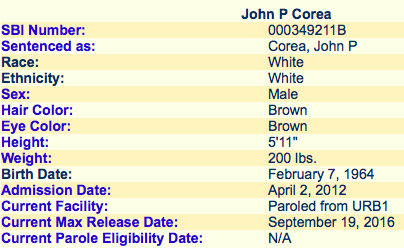 Are you ready for a war?

Romano offered some words of counsel on the upcoming second ward race and by extension to those Old Guard "darksiders" in attendance with a declaration:

The declaration of war on Reform's second ward candidate in Tiffanie Fisher and by extension its citywide council candidates ups the ante and the stakes this November with the council majority up for grabs.

Six ward seats of the Hoboken City Council are up for election November 3rd in the nine member body.

Fourth ward City Council candidate Ruben Ramos was notably missing and reportedly sports a grudge to those like Peter Biancamano who ran on a slate against his mayoral ticket in 2013.

In Biancamano's remarks, he stated his campaign was "going to do something crazy. "We're going to tell the truth." The topics he highlighted: taxes, rent increases, and alleged lack of maintenance in Elysian Park.

Biancamano reportedly said at the event he seeks "a resolution" to the Monarch Project which the City of Hoboken is fighting on multiple legal fronts.

Tiffanie Fisher is a leader in the opposition to the Monarch Project towers and supports the City's legal efforts to see the proposed development stopped.

The site of the controversial Monarch project towers was originally contractually agreed to be parking and tennis courts as part of the approval for the Shipyard buildings.


Talking Ed Note: The Monarch towers represent for Hoboken the latest in a long line of developer promises reneged against Hoboken people.

Biancamano in a letter to Hoboken residents last week offered more information should be given on the Monarch Project. The conclusion one can draw is they would be swayed the Monarch towers are acceptable and desireable in place of the promised parking and tennis courts.

At the last City Council meeting, developer deals was a topic on the question of acquiring six acres of BASF in northwest Hoboken.

Once again, it was the Old Guard council Russo faction arguing on behalf of a "developer deal," articulated by Councilman Michael Russo and his running mate, fifth ward council candidate Eduardo Gonzalez.

The City Council however took off the table any alleged BASF towers and moved to acquire all six acres for public application envisioning a resiliency effort in a park and a first of its kind municipal parking garage.

The Hoboken public weighs in on these hefty matters November 3rd in critical council elections.


Are you ready for a war?