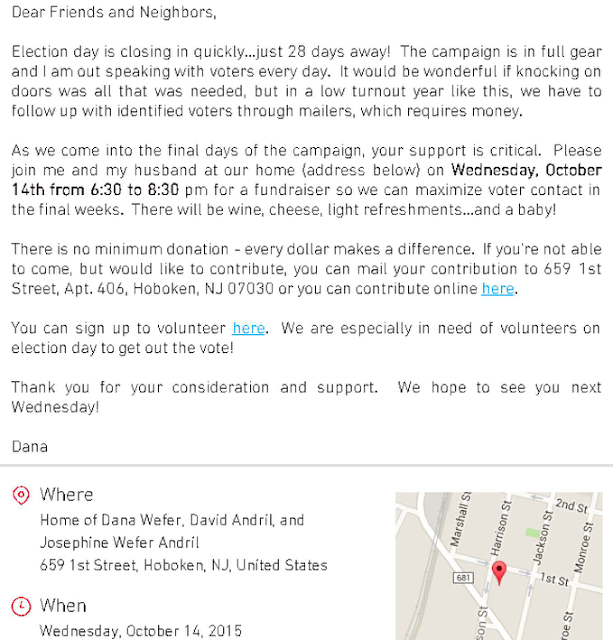 Contribute via the link:
http://www.weferforcouncil.com/#!contribute/c24vq

Several years ago we came together advocating to Mayor Zimmer and the City Council to turn the vacant lots at 1st and Jackson Street into new open space in our neighborhood. At that time we submitted a petition with over 400 resident's signatures at a Council meeting.

For the last several years I have been advocating to Mayor Zimmer and my council colleagues to acquire these vacant properties. At times our idea met resistance; however, I never stopped advocating for new open space as this is a major quality of life issue for our neighborhood. Through the years, I continued the conversation with Mayor Zimmer and my council colleagues continually pushing for these properties.

Today, I'm excited to report the city has negotiated a twenty-year easement agreement with the property owner creating new open space in our neighborhood! The city also has an option to purchase the property at market rate plus $1.

Last night, the Council voted on this agreement by passing the first reading of an ordinance.

I urge you to come out and voice your support for this twenty-year easement agreement as the Council will need to pass the agreement on second reading at our next meeting on Wednesday, October 21 at 7pm at City Hall.

In the near future the city will begin a public planning process to program this open space. Perhaps a new community garden is just what the neighborhood needs.

I'd like to thank Mayor Zimmer, Corporation Counsel Alysia Proko, and my council colleagues for working together to bring us new open space in the 4th Ward!

As part of the negotiated agreement, the property owner is required to demolish the vacant burned-out building within six months. We are requesting that an aesthetically pleasing fence be constructed surrounding the property.

I respectfully ask for your continued support and that you vote on Tuesday, Nov. 3 to re-elect me as your 4th Ward council representative.
I would like the opportunity to finish what I have started. Hoboken is my home, and all of my neighbors in the 4th Ward are my family.

The seven Hoboken Board of Education candidates squared off on issues such as budget cuts, Hoboken High School and charter schools at the debate at the Church of Our Lady of Grace.

From  the desk of Hoboken Mayor Dawn Zimmer:

Today, I write in support of three terrific candidates seeking their first terms on the City Council: Mike Defusco in the 1st Ward, Tiffanie Fisher in the 2nd Ward and Dana Wefer in the 4th Ward.

All three have clearly demonstrated their readiness for public office with their strong records of civic involvement as private citizens.  Mike and Tiffanie both serve on the Zoning Board and Dana is the Chairwoman of the Hoboken Housing Authority.

Through his work on the Zoning Board, Mike has demonstrated a commitment to smart balanced development, a firm grasp of the issues and an openness to consider alternative points of view. Perhaps most importantly, he will bring to the City Council a fresh outlook together with a civility that will enable him to work with others to get things done for his neighborhood and our City.   His opponent, by contrast, has been a City Councilwoman for more than 20 years.  For the past several years she has, in my opinion, consistently put politics and even personal animus ahead of her responsibility to serve her constituents.

As a private citizen, Tiffanie has stepped up to lead not only her building’s condo association, but her entire neighborhood’s fight against the Monarch project, the large scale residential development proposed on an uptown pier in place of the tennis courts promised by the developer years ago.  Her activism stands in sharp contrast to her opponents, whose voices have been silent prior to this election campaign.  One of her opponents, Peter Biancamano, still has not taken a clear position against this outrageous developer game of bait and switch, played at the expense of the residents of the 2nd Ward.

Dana has brought independent, honest and transparent leadership to the HHA, charting a strong positive course for our City’s most vulnerable residents.  One of her many accomplishments was leading a nationwide search that has culminated in the hiring of a highly experienced new Executive Director who will begin work soon.   Her experience at the HHA has demonstrated her leadership skills, as well as her integrity and her commitment to all of our 4th Ward residents.