From the desk of Hoboken Mayor Dawn Zimmer:

Mayor Dawn Zimmer applauded the Hoboken City Council’s unanimously-passed resolution calling on the Governor and State legislature to require county governments to comply with the same 2% tax levy cap which currently only applies to municipalities. The resolution also calls for Hudson County to voluntarily comply with a 2% cap regardless of whether State law changes to make such compliance mandatory.

“In the last five years, Hoboken’s municipal tax levy has decreased by 6 percent while Hudson County’s tax levy increased by 20 percent,” said Mayor Dawn Zimmer. “As a result of the unfair equalization formula, Hoboken's County tax burden has risen by an additional 28 percent for a total County tax increase of 48 percent. As a City, we are tightening our belts, finding efficiencies, and making difficult decisions to cut costs, but unless the County does the same, our taxpayers will continue to face unbearably large tax increases year after year. I join the City Council in calling on Freeholder Anthony Romano to introduce and the Freeholder Board to adopt a resolution to voluntarily comply with the 2 percent tax levy in all future budgets.”

The resolution passed by the City Council last week can be viewed at: www.hobokennj.gov/docs/council/10-21-15-Resolution-County-Taxes.pdf. 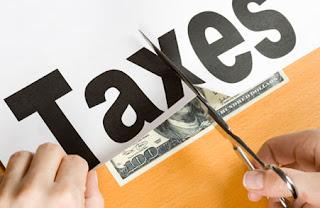 From the desk of First Ward council candidate Michael DeFusco: 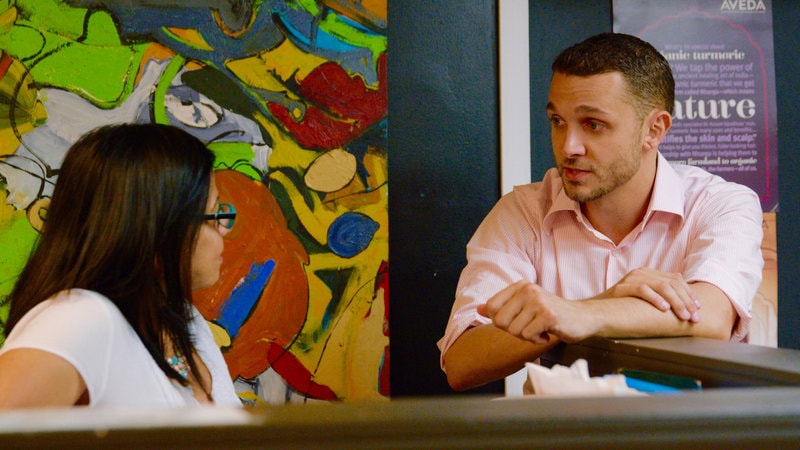 With the excitement of the World Series and Halloween, I just wanted to remind everyone that Election Day is just six days away -- this coming Tuesday, November 3rd!

If you elect me to the Council, I will strongly support modern professional budget practices - ones that are essential to holding the line on taxes and keeping Hoboken on a sound fiscal path.

Another important topic for our transit-centered community is the recent PATH service cuts. I want to again restate my extreme disappointment with these cuts. Like many of our neighbors, I take the train daily to NYC and the decrease in scheduled service not only lessens our quality of life, but seriously hurts downtown business.

The incumbent has resisted putting modern budget practices in place, opposing fiscally responsible measures such as selling our hospital to a private entity, which freed the City from the risk of defaulting on a $52 million bond guarantee and maintaining a sufficient Rainy Day Fund.

When the deficiencies in her record are accurately pointed out, instead of substantive responses, she responds with false attacks and name-calling.

That's unfortunate and a further illustration of why we need new energy and leadership in the 1st Ward.
Posted by SmartyJones at Wednesday, October 28, 2015
DeFusco: 'New energy needed not personal attacks substituting for a bad voting record'
2015-10-28T19:00:00-04:00
SmartyJones
Comments

Grist for the Mill: First ward importing Russo voters from the Third?

Hoboken's decisive City Council election is approaching the backstretch. The street is being engaged, money is flowing, campaigns are firing on all cylinders and candidates are jittery for what promises to be an intriguing election this Tuesday.

A true three way race in the fourth ward wasn't expected by some but anticipated by others. Ruben Ramos is preparing a repeat of the 2013 GOTV effort. Mom has been knocking on doors but there's some unwelcome unannounced guests arriving on lower first street. That wasn't part of the plan. Who invited them?

Tim Occhipinti and Dana Wefer are hoofing it hard and their respective mailers hitting. Take no prisoners is the theme of the day. Here's the newly released version from Wefer: 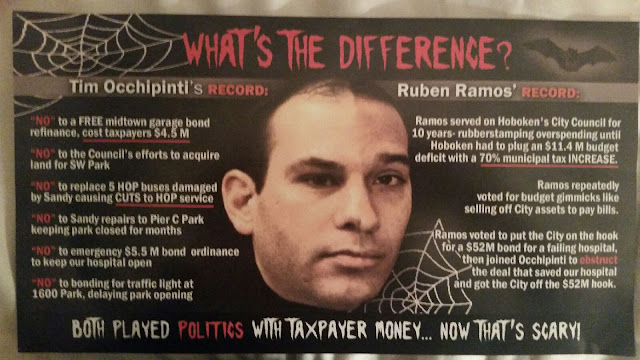 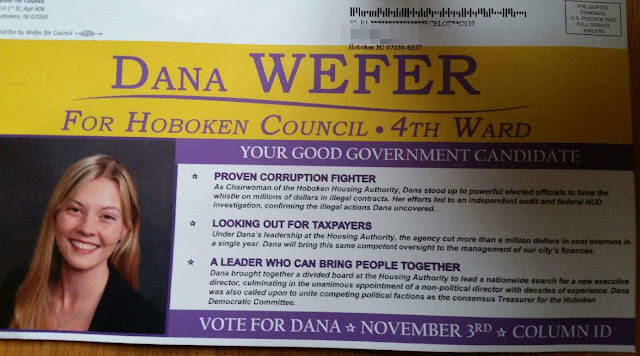 The second ward race is officially a three way race too. Except it ain't. Maxwell Place hosted the candidates earlier this week. Second hand accounts say Bonnie Murray fared poorly and residents were surprised at her lack of knowledge on Hoboken issues. Some reportedly shied from asking further questions to not further embarrass her.

Peter Biancamano is selling himself as a budget-tax hawk of sorts. He cites his votes on the nine member board of the Board of Education as his qualified budget experience. Some BoE trustees will be alarmed to hear that news. They'll be blistering mad when they hear he's taking any credit for budget work of others. None of his eight BoE colleagues are endorsing him for council but they did hand him an ethics charge connected to campaign misinformation of his 2013 council race.

Worse, a Michael Russo $2,500 loan apparently came up at Maxwell Place and a Biancamano supporter attempted to deny its existence. Audience references were made directing people to the ELEC report. The supporter got up and left in a huff, their denial and self-esteem with neighbors blown in a single Monarch Man bound.

Tiffanie Fisher celebrated her birthday last night with another meet and greet. What better way to celebrate your 39th birthday again then with friends new and old? Reform activists are solidly behind her in the second ward but have they got a hang of this social media thing? Some say candidates live and die by that element of campaign strategy in 21st century elections.

Michael Russo is very confident of victory in the third ward facing no ballot opposition. The spin cycle is set to launder and extra fluffy. Some say he's also keeping all those Carmelo litigation emails spit shined. Where is a scumbag Hoboken411 ghostwriter family when you need them?

Operation Mayhem may revisit this election with Solomon Dwek facing off against Russo as a write-in challenger. Hey, what can we say, "Go Solomon!" The Russo Clan is rumored to be considering another form of mayhem. The latest family endeavor may port voters from the third ward to unused voting rolls in the first ward. Law enforcement is pointing a microscope at Hoboken with little election avarice operating elsewhere. The Old Guard will applaud this innovation. VBM abuse is so old hat.

Radical "solutions" could be on the table with the first ward race between Councilwoman Terry Castellano and challenger Michael Defusco going down to the wire. Most observers know this will be a barn burner. People on both sides also agree Carmelo Garcia's tired act is going down the tubes in the sixth ward. Councilwoman Jen Giattino earns points and plaudits for her grace and style under fire. She never gets ruffled but you know there's a sewer in the fourth ward about to be catapulted for a long throw at the Giattino's post-Sandy repaired home. The Wire as Garcia is also known believes with the right throw, enough damage can force Giattino and her family out like a hurricane. Carmelo will proudly announce her forced departure as abandoning constituents. Wait, wasn't that yesterday?

At least one campaign sign is up for Eduardo Gonzalez in the fifth ward. It's surrounded on all sides for blocks by Peter Cunningham signs. Call Perry Belfiore a brave man or call him the best home for a last stand. Time to cash out aka Carmelo Ethnic Cleansing style with a civil lawsuit against the Hoboken police and City? Let's call Beth for a lawyer and go to the videotape!

Of more immediate interest, how hot and heavy is a late Vote-by-Mail effort taking shape in the fifth ward with the hope of taking Councilman Peter Cunningham out? We'll see shortly but who's watching the fox while it hunts at Fox Hills?

On the BoE front, there's two "newcomers" on the Old Guard ticket led by Marine View resident John Madigan. All those who think Madigan sounds and looks a bit like Joey Pantiliano; you're right.

And for those of you who don't, you don't know Joisey or Hoboken.

Some Old Guard tools don't know Hoboken either. They'll get an education how the Old Guard plays the game when the disparate numbers for the BoE come in on Election Day. Thank you for playing (or being played.)

You lay down with dogs; you get fleas. Call Monarch Man or an exterminator, take a hike to the burbs and go sell out some other town.


Grist for the Mill is MSV's rumor column. Got a tasty carrot for Da Horsey? Send it to smartyjones@me.com. All email is kept confidential until mutual agreement and is protected by Da Horsey's proven Reporter Privilege upheld under the NJ Shield Law in Hudson Superior Court.
Posted by SmartyJones at Wednesday, October 28, 2015
Grist for the Mill: First ward importing Russo voters from the Third?
2015-10-28T09:25:00-04:00
SmartyJones
Comments

The following story comes courtesy of John Heinis of the Hudson County View:

After about two months, Hudson County View has profiled all 13 candidates running in the Hoboken City Council race, which take place one week from today. By John Heinis/Hudson County View
Ward 1
Theresa Castellano (incumbent) vs. Mike DeFusco
• Agree on NJ Transit Rail Yard Development a top priority, disagree on almost everything else.
• Castellano has pointed to DeFusco previously supporting her, while DeFusco has gone after her voting record on matters such as voting against keeping Hoboken Unviersity Medical Center open in 2011 – see some of their exchanges at the most recent Council debate.

The final push to Election Day

It’s just one short week until the November 3rd election, and we’re working hard to spread the word to ensure high voter turnout!

Tom Kluepfel is running for re-election. He is joined by Sheillah Dallara and Addys Velez, two energetic and committed district parents. The Board of Education needs their kind of integrity and commitment.

Although we’re getting down to the wire, there are still significant ways for you to help. Contribute to the campaign, of course — we still need to produce a city wide mailer and more campaign flyers. Spread the word by “liking” us on Facebook and putting a campaign sign in your window. And tell your friends why it’s important to vote Kluepfel, Dallara, and Velez  2-4-6 Column F on November 3rd!

But most important is informing voters on Election Day, and getting out the vote. Please consider volunteering an hour or two next Tuesday to help elect Tom, Sheillah and Addys. Simply reply to this email to let us know you want to help continue the progress!
*       *       *

Contribute: We are an all-volunteer grassroots campaign. Every contribution -- no matter the size -- makes a difference. You can contribute online via Facebook or at this web page. To contribute by check, simply reply to this email to let us know. We’ll provide the details.

Campaign Signs: Put Reach Higher Hoboken campaign signs in your windows to show your support and create awareness. Reply to this email and tell us how many you need. We deliver!

Canvass with a Candidate: Join Tom, Sheillah and Addys when they’re out talking to voters. Or take them on a 30-minute door-to-door and introduce them to your neighbors. To canvass with a candidate, reply to this email.

Get Out the Vote on Election Day: This is the most important thing you can do! We need to make sure voters don’t forget to cast their three votes on November 3rd for Tom, Sheillah and Addys. Just one or two hours of your time on election day will make a world of a difference in this election. Reply to this email to let us know you can help.

Finally, PLEASE forward this email to your friends and neighbors. Spread the word about the Reach Higher team. And cast your three votes for Kluepfel, Dallara and Velez (Column F, Rows 2, 4 and 6) on November 3rd.  Let’s make our district schools “even” better!
Posted by SmartyJones at Wednesday, October 28, 2015
The final push to Election Day
2015-10-28T08:53:00-04:00
SmartyJones
Comments