Disenfranchising the vote and electorate

We're in the final stages of what by all appearances will be one of the dirtiest Hoboken elections in recent memory.

One keen lifetime resident noted it's the back end of the slime oozing out creating a damning impression whereas in the past, the slime reared its head early.

That balanced perspective aside, it's taken many aback. The pernicious lies and putrid sludge oozing across the Mile Square City have centered on Councilwoman Jen Giattino and a late hit job surfaced on the beloved Beth Mason hate site, Hoboken411. There's more to these morsels (and finprints) of corruptocrat action. Take a bow dirt bags.

Putting aside the Carmelo Garcia - Masonista tandem and the vicious vindictive benefactress for the moment; there's another spectre in our midst.


Of course we're talking about the staple of Old Guard elections: voter fraud. In Hoboken, the gangsterism collecting Vote-by-Mail by hook or crook is a fundamental food group in Mile Square City elections. This election cycle however has a different flavor.

As one person close to the ground of one campaign said about the tally in one uptown location, fear and intimidation is rooted with threats to seniors having the roof taken from over their heads.

While the Hudson County Board of Elections won't comment during the actual election cycle, boots are on the ground in Hoboken and Grafix Avenger highlighted the snafu busted at one fourth ward location: 400 First St.  Poor seniors living in the (Section 8) Hoboken Housing Authority are reportedly in hiding behind closed doors fearful of the authorities. Sandra are you being less than nice? Things after all could get worse.

Councilman Tim Occhipinti went on the record with GA saying he has nothing to do with what's taken place at that location and pointed the finger directly at his opponent, former Assemblyman Ruben Ramos.


A report on Grafix Avenger points to whole sale panic among the Russo faction Carmelo Ticket.

Ask not who the handcuffs come for, they're coming for thee.


Talking Ed Note: For those unsure on the differences in the slates of this election, here's the downtown council race forum. It easily surpassed the uptown version from every aspect including pure entertainment value.

Listen to the voices advocating for big scale development. The would be council leaders: both Michael Russo and Ruben Ramos are openly calling for exactly that saying it's a tax driven requirement.

Maybe they're correct, perhaps they're not. No one should be unclear what that means under a reign in Hoboken they'd lead.

Horsey Racing Form: It's a serious weekend for all the campaigns and GOTV (Get Out The Vote) efforts.

Unfortunately for the Russo faction Carmelo Ticket, a leak's sprung with investigators on the ground. If accurate, they want to know where election investigators are heading; the fear and trepidation has struck pay dirt. Good luck with that!

The woman at last week's Maxwell Place forum for 2nd ward candidates claiming Peter Biancamano did not take a $2,500 loan from Michael Russo turns out to be none other than his TREASURER: Susan Costomiris.

As it turns out Ms. Costomiris signed the ELEC report confirming she was the Biancamano Campaign Treasurer on October 3, 2015 containing the Michael Russo loan recorded and entered the previous month.

Then there's this additional tidbit of interest. It turns out that second ward competing candidate Bonnie Murray had a petition signed by the very same Susan Costomiris. 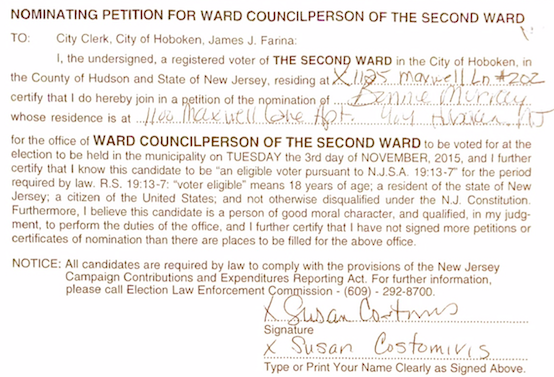 Collusion or was the Peter Biancamano official Treasurer making a solo call on having a third party candidate join the second ward election by complete chance?

Eduardo Gonazalez text's you for votes: whether you like it or not

The Old Guard is not joking about this election. They're pulling all the stops, legal, illegal and shades of illegalities running rampant as we crawl to Election Day.

Speaking of illegalities, MSV requested comment from the Ruben Ramos campaign on the descent of election investigators on 400 First St. based on the breaking report on Grafix Avenger yesterday. In that GA updated report, the headline says:


(Redacted) is telling VBM voters not to open the door for inspectors."

According to witnesses, Mike Russo, was screaming at Charlie "Blue" the Chief Inspector under John Bryzowski, the Acting Superintendent at the Board of Elections.  With Mike Russo was Mama, Kim Glatt and Jay Yacker, George DeStefano, and Ruben Ramos' attorney.  Kim Glatt argued that they needed to know the difference between a 'challenge' and an 'investigation', then demanded specific information on which buildings were being challenged (or investigated).   Matt Calicchio was there screaming...


Well over 50% of registered voters in 400 First St. voted by absentee (Vote-by-Mail) ballot.
How did such a Festivus miracle occur and can anyone offer a scientific explanation for this Flo?

All silent on the southwest front.


Here's Exhibit A on another front: 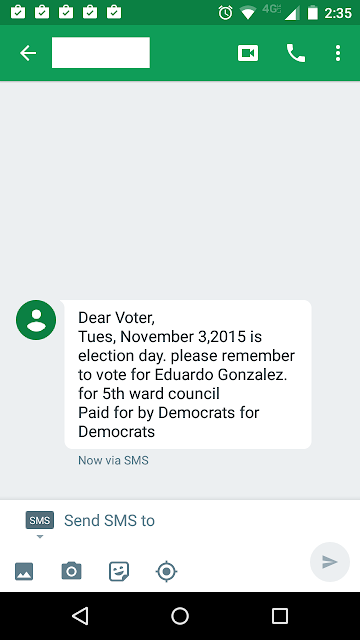 One MSV reader submitted this minutes ago unsure how their private phone number was obtained but described its abuse writing:

"I've never signed up for anything related to the Gonzalez campaign, and therefore, these text messages are illegal (I think) according to the FCC.

These guys are getting desperate.

I'm not a legal expert so I'm not 100% sure it's against the law. But spamming potential voters is pretty pathetic."


Talking Ed Note: It's Halloween, or for some of us the eve of All Saints Day when the power of Our Lord's light redeems the chaos from the darkness.

For the time being, consider Hoboken under the spell of the Darksiders. Take precautions and be careful out there.

For now, keep a watchful eye and remember, her blob like expenditures are infecting at a moment's turn everywhere as seen below and many of our resident's mailboxes.

Godspeed and St. Michael's light of protection on the Giattino family.

Da Horsey hasn't forgotten you. This is not a normal weekend. More to come.
Spread the word; voters are our friends.