Weebles wobble but bobble heads fall down: the sad tale of woe of Natalie Morales

The year end Hoboken political fun and games season was at the finish line or so some thought.

According to Grafix Avenger, the Mile Square City is not out. As everyone is winding down weaning themselves off the political fix available on almost a daily basis in the town where On the Waterfront corruption was built, then erupted a NBC talking head. 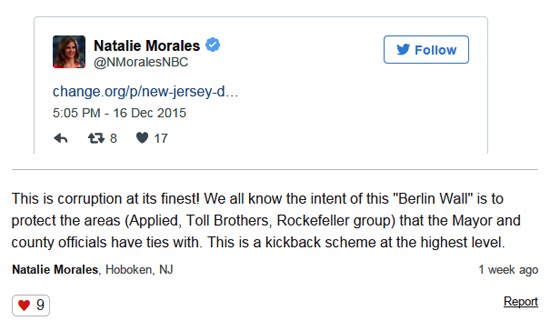 Will Hoboken be coming off the holiday season with an exclusive groundbreaking corruption story on NBC courtesy of Natalie Morales?

Somehow this horse finds that extremely doubtful. Either someone managing the twitter account for the NBC bobblehead is just making noise with some potentially defamatory criminal allegations or the NBC teleprompter reader needs to have some basic facts shared with her.

Either way, someone has some serious splain'in to do.

Comparing the DEP proposed Concept A flood plan to the Berlin Wall is unfortunate enough. There's been noting but lots of vociferous complaining about Concept A, one of five plans offered by federal DEP engineers and issued through another federal agency, HUD.

A quick eyeballing of recent events would show Mayor Dawn Zimmer going toe to toe with Applied Housing, re: the Barry family and their infamous Monarch Project in the northeast. (It was only in November when the mayor endorsed well known Monarch Project opponent Tiffanie Fisher who is the councilwoman-elect in the second ward.)

Someone certainly could have shown Natalie Morales the Rockefeller Group proposals over the last several years which likely cost the mayor her positive relationship with NJ Governor Chris Christie when an alleged messenger issuing demands on their behalf in Lt. Governor Kim Guadagno made national news.

Of course, talking to just about anyone among the mega pro development community would have offered a clue to Natalie Morales; the mayor is no fan of their sky scrapper efforts nor they hers.

Any of this requires a minimum modicum of awareness in your hometown. Perhaps Natalie Morales can find some way to speak to some of her neighbors.

Someone's bound to have a clue she can buy.


Talking Ed Note: Just when we thought we were out, a TV bobble head drags us back in.
Why the desperate need to lie and pump out misinformation and phony criminal allegations?

Related: Another local resident joined a chorus with a letter opposing the Concept A flood plan.
At least that's straight forward opposition to an idea already Dead-on-Arrival.

Perhaps Hoboken can move forward on elements of the other Concept Plans which will work to benefit and secure the most residents? Oh, perish the thought.