Hoboken blasted with seasonal climate change and the turn of the calendar is nothing in comparison to Hoboken politicos spiking traffic here who are back in the fray for 2016.

As New Year lingers in the backdrop of corruption accusations pointing at Mayor Dawn Zimmer and many lie in wait to see the final verdict on Observer Highway, Rebuild by Design, the all season hoped weather solution will see more resident scrutiny.

The bizzare corruption charges hysterically targeting the mayor and lauded by some (this is Hoboken after all) are being openly mocked and derided as ignorant by others. Even the Feds and its usual bureaucratic expectations may be surprised at the vehement opposition mounted to Concept Plan A with its proposed design element of a wall on upper Garden Street.

One might have anticipated something more highbrow from the monied interests uptown but the usual fabricated hysteria seen from elements of the fourth ward and Old Guard denizens apparently spread like a virus uptown and turned a group of uptown one-percenters into zombie Carmelitos or ghouls seen in the days gone by Russo faction.

While it's not clear how much ignorance was driving upper Garden Street's Natalie Morales, some small part is simply NIMBY - (not in my back yard).

But NIMBY self-entitlement doesn't justify lunatic fringe allegations of corruption and alignment with big developers or outrageous tweets pointing to either.

Don't all the Lamestream Media talking heads love, believe and worship at the altar of Big Government? Well, the Feds re: Big Brother are in Hoboken dangling $230 million of funding which certainly comes with strings. Those strings have everything to do with a bureacracy and five concept plans being presented on behalf of Jersey City, Hoboken and Weehawken.

Why the sudden sour puss for Big Government Natalie? When did a small wall running down a residential block become the equivalent of the Berlin Wall? Did you not catch any episode on the History Channel with people shot and left to die in an attempt to escape the communist empire in the east? No, not the Upper East Side, we're talking real life and death of many seeking basic freedom during the Cold War. 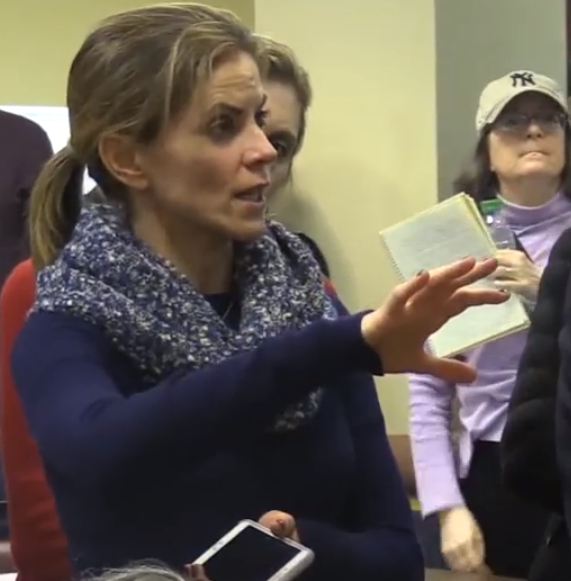 Natalie Morales of NBC TV helped spread NIMBY panic tweeting to a petition alleging the mayor's corruption and alignment with big developers. As if.

BoE Trustee Peter Biancamano who was soundly beaten by second ward councilwoman Tiffanie Fisher last November for the uptown ward seat made political hay on the BoE trustee vote for its leadership saying:

"We sat up here last year and the media has portrayed this board as 'eight to one' 'eight to one,' me being the 'one,'" Biancamano said. "So, Tom, I'm going to vote 'yes' on your nomination tonight, in the hopes that you continue ... to move this district forward and be inclusive to all the members."

After a unanimous vote electing Tom Kleupfel, the new President of the BoE, trustee arrival John Madigan promptely nominated Peter Biancamano who lost on a 6-3 vote to Jennifer Evans for the VP slot. (Madigan was joined by Peter Biancamano and Britney Montgomery.)

So, all and all what you have is the political reality and everyone holding to form. What this means to the Hoboken School district? Education will be the focus and there's no jobs bank comeback in the making. Politics won't be going anywhere.

John Madigan reportedly nicknamed SYKE (short for psycho?) will hold a seat among nine BoE trustees. Do we need to rehash the clash on the street with a former BoE trustee and Hoboken mom with her baby daughter on a local street back in the day or is new material on its way?


NJ.com also weighed in on the new 2016 Hoboken City Council asking what actions will be taken after the mayor supported a council team now posing a potential 7-2 majority.

Outside of some major infrastructure issues, finalizing a plan for Washington St. and the aging infrastructure below the Mile Square City, it's unclear what kind of City Council will emerge. It all remains to be seen in action, not theoretical numbers.

Bonding requires six votes of the nine member City Council meaning two-thirds of the council must agree on any details finalizing a bonding proposal. Washington St. is the big visible issue everyone wants to see addressed yesterday.

A commissioner position on the North Hudson Sewerage Authority is expiring and the Hoboken City Council will be charged with filling the seat. Frank "Pupie" Raia who withdrew for claimed health reasons last fall from the third ward council race is the expiring seat needing to be filled.

Will the Pupster make a miraculous recovery and offer to add to his already two DECADES on the NHSA board? He's managed to solely retain taxpayer paid health benefits and that item is what's thought to have led to the Ruth Chris' Steakhouse now believed dead dinner deal cut with Mikie Squared and West New York power brokers exclusively broken on MSV.

For the sake of "diversity" shouldn't someone - anyone - get a shot on a major board after holding it for two decades? How about a farm animal? You know, for the sake of "diversity." This Horse is seriously considering submitting an application because you know the affable fraternity of a horse and a Wolff and.... wait for it... REFORM!  Do we still believe in walking the walk or are we going with talking the talk?

Pure unconfirmed rumor but a will-o-wisp floating out there says Parking Director John Morgan may move over to Public Safety after the departure of the well respected and highly qualified Jon Tooke. If true, we'd need to see his public safety credentials first.  Morgan saw a rough time of it before the newly constituted city council Monday night. There was some question about who is setting policy and who is acting for parking and transportation issues under that mandate.

Who's brilliant idea or political maneuver was it to put a Hoboken realtor on the Zoning Board of Adjustment? This horse says diversity of ideas is welcome but putting the fox in the henhouse, not so much. Smarten-Up!

Councilman Ruben Ramos didn't waste time after returning to the Hoboken City Council proposing a traffic alteration on lower Jackson Street. People are apoplectic about the traffic problems getting in and out on the southern end especially during rush hours. Da Horsey is very interested in learning more about Councilman Ramos' proposal.

Some people misconstrue Da Horsey's criticism of the City Council's unanimous first official action of the year to flush down the drain $5,000 to the pro Old Guard rag Hudson Reporter. While the new second ward councilwoman Tiffanie Fisher put it on the table, the criticism holds for all the council members voting to approve the dubious belief it will generate more interest on City notices.

There's little doubt Councilwoman Tiffanie Fisher will grow into a superb addition to the legislative body. She is the first thought MBA educated member on the council; so let's hope she finds a spot on the Finance subcommitte where some of her talents will be utilized.

MSV however agrees with Grafix Avenger, the savaging in particular of Councilman Ravi Bhalla and the mayor in the Hudson Distorter merits them zero additional dollars from the taxpayers of the Mile Square City.


On the years long frivolous litigation front, your editor Da Horsey, SmartyJones will take on a fifth legal and fourth in a series of criminal allegations set for trial February 5th in Jersey City Municipal Court. What all the filers have in common against this horse is their utter eagerness to lie under oath.

Some of those lies have started to come back and haunt them. The recent cold streak isn't putting the deep freeze only on Mile Square residents. Grafix Avenger had some season's greetings with one downtown building prominently featured.

The latest year and a half old criminal allegations stem from former councilwoman Beth Mason.

On February 5th, a trial will be held on Beth Mason's criminal allegations over an alleged assault with a no. 10 envelope containing a trial subpoena in the SLAPP-suit she publicly supported: Bajardi v Pincus.

This Horse will sign no document yielding benefit to lies. A clear warning advised against lying under oath and filing false charges with added heapings of perjury was stated to all members of the public including its lesser more dubous ethically challenged members.

Grist for the Mill is MSV's rumor column. Got a tasty carrot for Da Horsey? Send it to smartyjones@me.com. All email is kept confidential until mutual agreement and is protected by Da Horsey's proven Reporter Privilege upheld under the NJ Shield Law in Hudson Superior Court.
Posted by SmartyJones at Thursday, January 07, 2016