How does Hoboken stand in Hudson County on taxes?

Hoboken is about to enter its annual budget season. Not a bad time to further view where the Mile Square sits in the tax framework among other Hudson County municipalities.

The following chart shows each Hudson County towns with municipal tax averages and changes over a one, five and fifteen year period. The chart originally appeared on NJ.com. 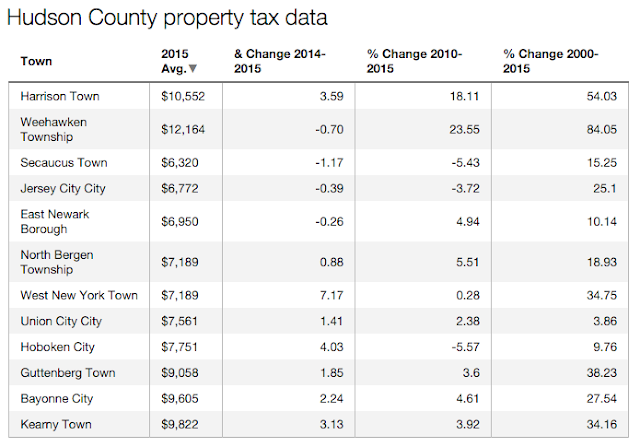 While Mayor Zimmer has been effectively reducing and keeping taxes relatively flat since 2009, the pressures with costs to rising health insurance in the millions, retirees and operations forces annual innovation and a serious effort in keeping spending overall down.

Hudson County in the period of the mayor's tenure has shown no such restraint in spending. It's budget easily exceeds half a billion dollars and double digit increases to Hoboken in recent years vaunted it to the top portion of the Hoboken taxpayer's bill.

Talking Ed Note: The chart above shows a four percent increase in munipal taxes for Hoboken last year but it's difficult to determine where that figure originated as the budget last year proposed a 1% tax increase and then the City Council majority headed by Reform pushed it down further to zero.

There is a park fund in Hoboken which saw an increase automatically tied to the tax reval- assessment but it's difficult to believe it accounted for any suggested 4% municipal tax increase. Another part of the increase may have been dictated by the library under a formula designated by law.

Update: The park fund or open space tax increased based on the assessment or reval changes. The library tax is tied directly to Hoboken property values by state law. We all better get our library cards as we're paying for it.

Unrelated: The Beth Mason trial set to be completed tomorrow has been postponed at the request of the prosecutor's office. Defense witnesses will be notified of the new date when available.
Posted by SmartyJones at Monday, February 29, 2016