A bunch of donkeys gathered together last night at Moran's to watch the New Hampshire primary results come in. By the time most had hoofed over, the winners were already announced.

Turned out to be a yuge victory for the Donald and a blistering win for a new "convert" to the Democrat Party in Bernie Sanders.

The early results didn't dampen the spirits or the turnout. Among the local political glitterati turning out: Mayor Dawn Zimmer, Freeholder Anthony "Stick" Romano, Councilman Ruben Ramos and a rumored appearance by City Council President Jen Giattino. Pupie swung by and posted guard at the door.

Everyone was imbibing and no one was arguing about bike lanes on Washington Street and how to progressively reduce the average speed there to the equivalent of Lincoln Tunnel traffic during rush hour.

While good cheer abounded, one eyewitness report suggests not all the local donkeys are ready to settle for Hillary preferring her opponent who doesn't know one family cult of personality is running the Democratic People's Republic of Korea. More free stuff for the person who can explain how that's possible while holding a US Senate seat.

Will they change their minds if Hillary unleashes the infamous Hoboken411 slime machine minion uh no, that's two different B's entirely: Brook and Blumental.  Will the Socialist candidate who switched to becoming a "Democrat" only a calendar year or so ago feel the Bern when Hillary's minions launch a torrent of projectile vomit about his Israeli days gone by staying on a Marxist kibbutz?

That "Bern" may take on a feeling more like a STD. Oooh, it berns.

Bernie Sanders best be ready because the hounds of hell are going to be unleashed on him with guns chatter galore. Hillary Clinton will be looking for new talking points, also called robotic spiel when it applies to Marcomentum (salud to Chris Christie on his infamous murder-suicide) and that means guns, guns and more guns or a hate fest on the Constitution. That's the US version not the Soviet model for all you kids playing at home.

After the plethora of hate on guns and numerous other American freedoms, the Clinton strategy will go into high octane pandering mode for the minority vote. You'll be hearing everywhere but Chicago how African American youth are falling in record numbers with Hillary's tireless caring. What you won't be hearing is anything about the shooter but that won't stop Black Lives Matter radicals from Clinton photo ops and sight unseen a bounty of checks cashed with it. One forlorn check will go undeposited.

On the elephant side of the animal party ledger, Donald Trump scored a yuge victory in a second straight consecutive record turnout for outraged stampeding elephants. There's better 1970 toothpaste commercials out there than the stump speeches Trump doles out with simple pro American credos featuring Americans winning on jobs, trade and the economy. A first time political novice crushed all his sophisticated experienced competitors, their political consultant class and pundits by appealing to Americans not the illegal alien vote? How utterly charming.

Irony of ironies, the winners of the New Hampshire primary consists of a New York City moderate Democrat from Queens and a hard core socialist from Brooklyn who wanted to take his betrothed to the beloved Soviet Union before the Berlin Wall fell with Ronald Reagan teaming up with Margaret Thatcher and Pope John Paul the Great taking down the evil empire. 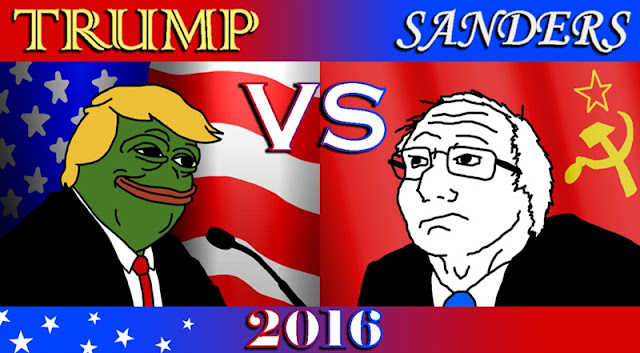 Posted by SmartyJones at Wednesday, February 10, 2016