The murder mystery of the illicit alcohol cup on Amtrak abounds. Or it's a game of clue on what's legal and illegal on serving drinks on Amtrak with a hilarious takeoff on Grafix Avenger. 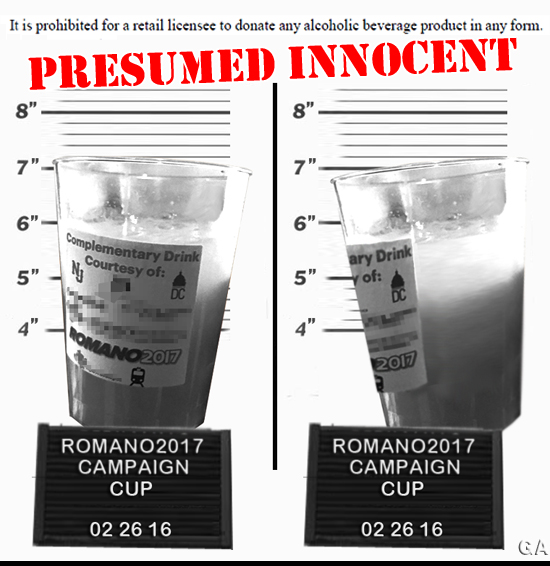 The Hudson County View covered a Freeholder Anthony "Stick" Romano fundraiser in his bid to become Hoboken mayor Freeholder in 2017.

Here's the Hudson County View report on the Romano 2017 campaign, not to be confused with the Romano for Freeholder campaign. Is it one, both, so hard to keep up with political ambition in the Mile Square

Talking Ed Note: For minimal clarification, MSV understands you can't appear on the ballot for both Freeholder and Hoboken Mayor in 2017. Stick, didn't Uncle Nick tell you?

Romano reportedly has already hired political consultant Pablo Fonseca gearing up theoretically for a third term as County Freeholder against unnamed opposition more than a year in advance.

Or is this another ruse like Carmelo Garcia ran using his outgoing Assembly seat to raise money to illicitly use in another campaign? (He ran an ugly, dirty race in a failed bid against City Council President Jen Giattino in the sixth ward using unaccounted funds based on NJ ELEC.)

Pablo Fonseca made a foray into Hoboken last with the failed bid of BoE trustee Peter Biancamano to win the second ward City Council seat won by Tiffanie Fisher.

Correction: If Romano actually seeks a Freeholder seat vs. Hoboken mayor it would be for a fourth term.