Upon introduction, Councilman Ravi Bhalla motioned to table the ordinance to the finance subcommittee and was quickly joined with a seconding motion by Councilman Michael Russo.


During public portion, these painted sewer murals came up: 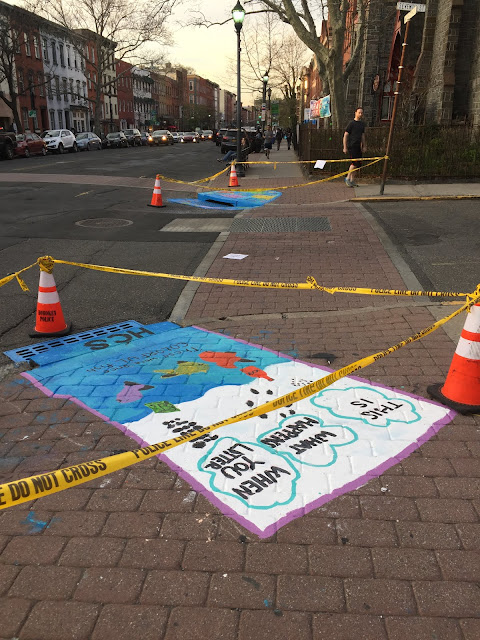 Hoboken resident Cheryl Fallick mentioned how she adored her nephew's drawings but celebrated them on her refrigerator asking of the spreading sprawl of kid murals, "When will it stop?"

The answer is uncertain. The City Council did not authorize (from what MSV knows) any sidewalk paintings that local schools  entertained among their students with declared winners unleashed paint buckets and brushes in hand.

Don't ask why? Think of the children? 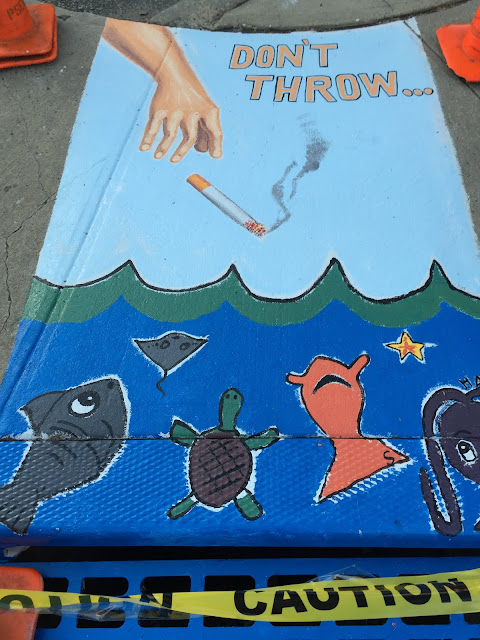 Talking Ed Note: Only several years ago, it was "fiscal conservative" Councilman Michael Russo who sought with Old Guard council allies his cousin Terry Castellano and Beth Mason to repeatedly cut the salaries of both the mayor and city directors. The savings contemplated were minimal but satisfyingly (or savagely) political.

The mayor had previously reduced her own salary when taking office to less than 115K from the 125K of her predecessor, convicted felon Peter Cammarano and similarly lowered the director's maximum salaries.

The Old Guard council wasn't satisfied and repeatedly tried to lower them without success.

Now, no small irony, the heavily subsidized health insurance benefits available to council members' families cost taxpayers tens of thousands of dollars potentially per councilman.  There's some disagreement about whether it's over $30,0000 annually or closer to $20,000 but a call hasn't been returned from City Hall verifying.

Councilman Michael Russo quickly lost his appetite to see touched his health insurance subsidy. Or as he once infamously proclaimed, "That's what government does, it subsidizes things."

While it's currently two council members receiving the family low cost health insurance benefit, the composition of the City Council can change in two and succeeding years thereafter. It's feasible the taxpayers could see council seats change with those costs exploding into hundreds of thousands of dollars annually.

Those costs and potential savings are neither symbolic, nor nominal as the health insurance cost issue is not going away - it's increasing.

Having said that, Horsey is looking for a part time gig with the Mile Square municipal government and the option of purchasing a Cadillac health insurance plan at a mere 3%.

It's a triple crown quality thoroughbred's right but 3% is too much. It should be 0%, "free" being all the rage these days.

What happens if other part time hourly workers decide to tell their union head to hire a lawyer and demand the same low cost subsidized health insurance option as part time council members?

How would such a discrimination lawsuit conclude?

The Horse is not a lawyer. It's the law of unintended consequences; just say'in.
Posted by SmartyJones at Thursday, April 21, 2016