Jackson St. traffic study approved, Maurice gets a park and the SLAPP-suit

An idea aiming for vehicle ease entering the southern end of town proposed months ago by Councilman Ruben Ramos saw passage with the council approving a 90 day study last night.

All told after some financial adjustments, the study, said to be mandated under law will come to roughly $33,000.

Cars will not park on the lower part of Jackson St. by Observer Highway in the hopes more vehicles can get through the logjam there during rush hour.

In the City Council consent agenda, among more than a dozen resolutions was one asking Hudson County to name the new Viaduct park after the late County Freeholder Maurice Fitzgibbons.
It passed with little fanfare as part of the larger group of resolutions and was sponsored by council members Ruben Ramos and Mike DeFusco.

Just a little shout out to OG friends. "To all my friends, look what we did to honor Hoboken political tradition. Haha, aren't we the coolest?"

MSV is going to start a campaign to see Hoboken's Southwest Park named and no it won't be after a Hudson County Old Guard politician. Have you seen your county tax bill lately? 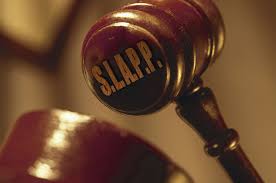 If MSV can help it, the Southwest Park will not be named after a HudCo politician but the staunch First Amendment champions who helped change the Hoboken landscape surrounding speech; who stood tall in an attempted mugging, pillaging and plunder of the rights to political speech - the victims of the vicious SLAPP-suit:


The Screen Name Defendants.
(They'll probably be fine sharing it with Mayor Zimmer.)

Screen names such as davidd, SS1959, Redrider and yes Klaussenfluffer among others have done far more to improve Hoboken than Maurice or any of his political cronies ever did in protecting First Amendment speech of ALL Mile Square residents.

After most of the frivolous lawsuit had been thrown out in September 2014, there was not much left and next to zero chance anything would be problematic with a looming trial scheduled to follow shortly after.

Most of the screen name defendants had already been thrown out of the case months earlier, never seeing a single allegation made against them as required under NJ defamation law. Almost to a person, the Screen Name Defendants were dragged into a frivolous lawsuit solely to send a message to them and anyone else who dared to speak out (anonymously mind you) on Hoboken Patch or anywhere else.

That message from the SLAPPers and their small coterie of scumbag friends, "You will not dare to speak against Hoboken corruption, the Old Guard and its allies," and of course the head of the snake they worshipped - the underwriter of all ugly Russo faction political operations.

Saving the First Amendment and ushering in the overwhelming makeup of City Hall with the City Council and mayor's office didn't happen by accident.

As an unorganized group of citizens, the Screen Name Defendants like online Navy Seals trained on MSV went into the battlefield known as Hoboken Patch and leveled the landscape of the minion SLAPPers on Hoboken411 who sought a censored, controlled "dialogue" where the Old Guard controlled all political discourse in the Mile Square.

Since the political failure of the SLAPP-suit, Hoboken has seen decisive elections for both mayor and City Council changing the entire landscape of decorum and good governance.

How soon they forget.

Talking Ed Note: Oh look at the time. Have to get a bunch of things done and get ready for another briefing, plan and legal meeting - on the SLAPP-suit.

Did you know it's four year anniversary lies just up ahead come July? Approaching four years with bills in the hundreds and hundreds of thousands of dollars on both sides.

Ever wonder who's been funding it? There was a media blackout on a "hint" with an actual announcement at the July 2012 City Council meeting.

Maybe we should all aim to become Hudson County politicians and have no bid, low to no work "media/pr" contracts shoved into our pockets to the tune of tens of thousands annually.

Then you'd be worthy of having a park named after you.

They don't call this the Soprano State for nothing. And if you think Hoboken isn't part of Hudson County, well, let me show you Exhibit A. Sadly, it passed last night.


Birth of the Hoboken SLAPP-suit?
Not quite dead yet.

Related: Hudson County View published its story on the proposed municpal budget which contains a 3.5% increase. The proposed 2016 increase follows a 4% increase last year triggered by state requirements for the library and open space tax connected to the updated reval.