JC - Hoboken clash: It's about pah-kin'

Yesterday's grist smoked them out in the open. That's the official story and we're sticking to it.

It's rare being on the wrong side of the accuracy ledger, even in the popular rumor column "Grist for the Mill" but the brewing enchilada of conflict between Jersey City and Hoboken as it turns out may actually be about differences in bike share programs after all. 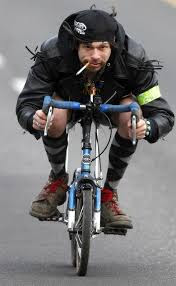 A source close to the Jersey City mayor's office came out of the cold to rue over the dynamics of Horse's grist and pointed to the conflict between the selection of two different bike share companies for the Hudson neighbors.

"Zimmer decided to go with the cheaper one," said the source referencing Hudson Bike Share.

When push came to shove, Mayor Steve Fulop in Jersey City opted "out" some will say but he elected it would be better to have residents have the option of using the same bike share program: Citibike, as the one available in Manhattan.

Apparently the allure of Citibike led to Jersey City changing its initial plan to join Hoboken and roll out with Hudson Bike Share as originally announced in 2014.

The scuffle apparently ensued when the neighboring towns saw each of its respective bike share companies seek parking access at each of their downtown PATH stations.

No one thought it a problem but when Jersey City asked about allowing access to Hoboken's PATH station, Hudson Bike Share reportedly said no. It placed Hoboken Mayor Dawn Zimmer with a difficult hand asking for a one-sided agreement.

Which led to a reciprocal response recently enacted by the Jersey City City Council. Hoboken's Hudson Bike Share is not allowed to park its bikes in Jersey City bike racks.

Talking Ed Note: Perhaps it really is too soon to talk about the NJ governor's race and the conflict is all about "pah-kin," the bike share kind.

Who would've thunk it?

Unrelated: It's a good day to schedule a mani and pedi, no? Well this horse thinks so.