A simple idea to aid the imposing traffic jam during rush hour at the southern end of town drags on and on with word an official study is required.

The City Council rejected a hefty price tag of $80,000 to genuflect on how removing parking at lower Jackson St. at rush hour can help move more cars through the Observer Highway entrance.

Originally proposed by Councilman Ruben Ramos, the idea has languished for months before reaching the point where the council is told a ballpark $30,000 contract for a planner is needed.

How many months have transpired after the simple proposal? 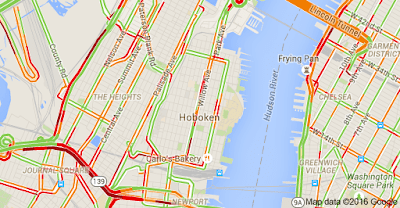 The County of Hudson holds the official naming rights to the viaduct uptown. The renovated structure features a new park underneath and a nomination by the City Council will forward a name.

Unremarkably, one idea is to name it after the late Maurice Fitzgibbons.

Hoboken taxpayers who pump tens of millions annually to the Hudson County coffers making it the largest portion of their annual tax bill will no doubt be thrilled to hear that a former HudCo legislator is the only name put forward in the Mile Square for a park.

What he didn't get enough government contracts with his name on it in life? From the guy who introduced the Old Guard and Hoboken to one Peter Cammarano.

Update: MSV typically loads the meeting here but the host changed the format leading to a link to that location to view:

On iPhone and iPad, a ustream app is available to watch the meeting with no interruptions.
After download, launch the ustream app and search for "City of Hoboken."
On LTE, usage rates if applicable apply. It works very well.
Posted by SmartyJones at Wednesday, April 06, 2016