An explosive email surfaced from within the administrative offices of the Hoboken Housing Authority vindicates Jessica Coco's claims of attempted eviction efforts by Carmelo Garcia against her back in the summer of 2013.

The email coincides with other criminal actions alleged by Coco and death threats confirmed the following month by MSV. Garcia responded to all the allegations by Coco with a blanket denial.

The email published yesterday on Grafix Avenger vindicates Jessica Coco's claim of bonafide eviction efforts against her by then Executive Director Carmelo Garcia.

Garcia at the time of the allegations loudly denied any eviction attempt took place. The alleged eviction notice he claimed was only a "cease and desist" notice surrounding alleged flyer distribution by a HHA activist housing group called "Save the Projects."

Another anonymous HHA resident believed part of the activist housing group also claimed to have been served with an eviction attempt but wasn't heard from afterwards, apparently due to fear.

But a true and original copy of the September 3, 2013 email was obtained in an OPRA request to the HHA and shows the desire and efforts to have Jessica Coco evicted were continuing after August 2013 into the succeeding month.

The actual email unedited in its entirety is seen below: 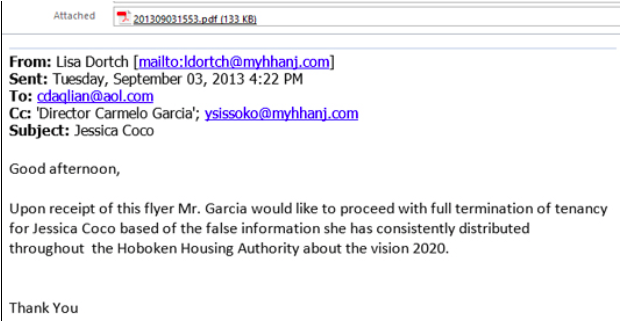 The email generated within the HHA administrative office is directed to then HHA counsel Charles Daglian and is copied to Carmelo Garcia and another HHA administrator bluntly stating, "Upon receipt of this flyer Mr. Garcia would like to proceed with full termination of tenancy for Jessica Coco based of the false information she has distributed.... about vision 2020."

Vision 20/20 was the undocumented massive redevelopment plan which sought to more than double the size of the HHA in downtown Hoboken and urged approved by Carmelo Garcia. Its rejection by the Hoboken City Council and Mayor Dawn Zimmer led to Garcia's filing the first in a series of civil lawsuits alleging "ethnic cleansing" and political retaliation.

Jessica Coco recounted at the time a HHA worker came to her door and tried to get her to sign the document in a darkened hallway outside her apartment on lower Jackson St. It was one among a consistent series of criminal actions she alleged transpired: death threats, vandalism attacks on her car and repeated break-ins into her apartment with one apparently setting an electronic spy tool which permitted all her electronic accounts being hijacked including a Facebook page called "Save the Projects."

MSV at the time confirmed in confidential communications to law enforcement agencies details of the computer hacking and subsequent threats against Jessica Coco. Similar threats were made against this editor's home in tandem with the hijacking within days of the above detailed action by Garcia.

The following is a complete and unedited series of emails from September 6th, 2013:

The first of a series of emails sent from the hijacked email account, "Save the Projects" was sent to MSV by email at 1:41 PM.

MSV at the time was unaware of the details of the computer hijack but familiar with the facts in a series of criminal actions against Jessica Coco to date and responded a little over an hour later:

The hacker followed minutes later with another ominous threat:

MSV invited further elaboration on which "politicians" to avoid:

No further email communication followed to MSV but several hours later Jessica Coco received a death threat sent through her own email account likely by the same person.

Talking Ed Note: MSV worked with Jessica Coco to eject the hacker, recover control over her computer, phone and email accounts and collected all the technical data. It was turned over to law enforcement authorities.

Based on information and belief, the technical data points to a suspect in the Hoboken Housing Authority who is believed connected to drug dealing and gang activity.

Under the advice of MSV's attorney, no further details can be published at this time.