Sign of the Times: All eyes on the Hoosier state

Today, the state of Indiana hosts its primary with the nation focused on the outcome.

The results may prove decisive to the nomination process heading to a finish. 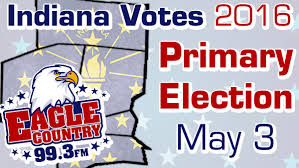 May 4 Update: The Indiana primary proved historic with national implications as Donald Trump swept the state taking almost 53% of the vote in a three person Republican race and all of its 57 delegates. In addition to sweeping all income groups and women, opposition collapsed.

The presumptive nominee looks toward the national election after winning

Bernie Sanders came back last night late to win the Indiana Primary against Hillary Clinton with about a five point victory. The delegate count as of this morning shows Sanders with 43 and Clinton taking 37 of the available 83 with three unaccounted.

Sanders has vowed to continue his uphill fight and points to closing a 60 point gap. Hillary Clinton moved on to the next battleground states as Sanders celebrated his win.