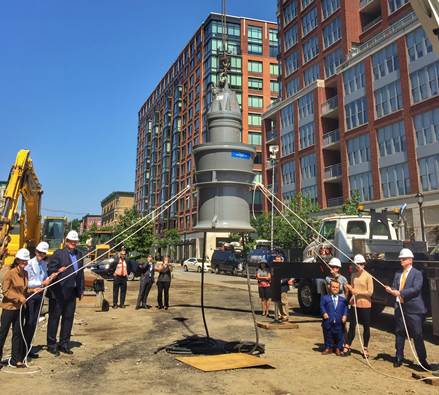 The pump station, which is entirely underground and is designed to alleviate chronic flooding in northwest Hoboken between 9th Street and 13th Street, is a joint project between NHSA and the City of Hoboken.

“I am excited that this project is on track to be operational by the end of the summer as part of a comprehensive flood resiliency plan to protect Hoboken from all types of flooding,” said Mayor Dawn Zimmer. “I thank North Hudson Sewerage Authority for their partnership on this project and the residents of Maxwell Place for their patience during the construction.”

The pumps are expected to be operational by August 2016. Final completion of the H-5 WWPS is expected for September or October.

The City of Hoboken is financing the bulk of the project, and NHSA is in charge of design and construction and will operate and maintain the pump station under a 99 year lease with Hoboken.
Posted by SmartyJones at Friday, June 24, 2016