Hoboken has a Lt. Governor candidate?

Most Hoboken residents are aware there's a national election this November and who the top candidates are. But how many could guess one resident self-identifies as a New Jersey Lt. Governor candidate?

If you are stumped, no one can blame you. After all, there's really only one high profile elected official who would likely register on the statewide scene. Her aspirations however have said the first and last stop of political office is Hoboken mayor. 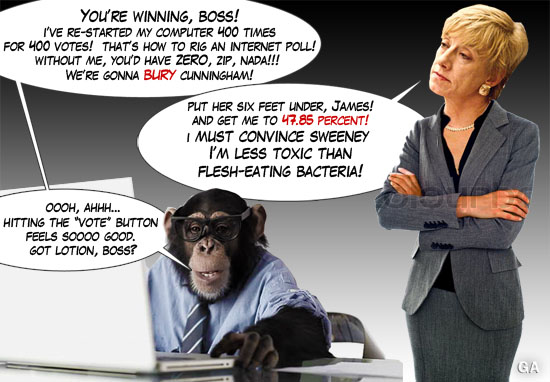 An online political publication put out a poll asking its very inside baseball NJ political readership the burning question; who should be considered a candidate for New Jersey  Lt. Governor?

Grafix Avenger covered the hijinx with another hilarious satire sure to anger the political operatives whose livelihood depend on Weehawken dive bars employing the family and a certain "civic" enterprise known for handing out hot dogs and schoolbags packed with pencils and straw. You know, to keep the bag looking fluffy and more charitable. We're not going to get into the less than charitable, quasi-legal political activities of the political section. That's above this farm animal's law enforcement pay grade.

Grafix Avenger explains how a failed former ward council member went from unheralded unemployed litigious housewife to statewide Lt. Governor in the click of a mouse.

Hey, who turned the fish into a chimp? With one ape on the staff isn't that one monkey too many?

For more on all the sidesplitting details.
http://grafixavenger.blogspot.com/2016/09/rigged-pick-me-pick-me-steve.html