Resolution 4: an appointment to the North Hudson Sewerage Authority - for all the poopie.


Alea Iacta Est is the Latin phrase for "the die is cast."

The plan to save Pupie

"Maybe ever'body in the whole damn world is scared of each other" Steinbeck wrote in the Grapes of Wrath.

If that's the deal connected to the North Hudson Sewerage Authority, many in the Mile Square public aren't buying and the traffic here yesterday spiked showing a growing not lessening interest.

What's been derisively described as the 2-5 plan: two years for Frank "Pupie" Raia on the back end and five more years for the current commissioner Brian Assadurian on the front end is all the rage and will be on the table tonight.

No one connected to City Hall is owning up to it but pulling a switcheroo on an expiring five year board seat with no one in the public actually invited to apply speaks volumes on transparency and good government or the lack thereof.

The musical chairs insider game is but one aspect that has observers troubled. What happens with setting a precedent of revolving board members on the same board with years remaining on their terms shuffled to the front of the line? Who's to say when the line crosses from ethical to illegal and public outrage?

Yesterday, Grafix Avenger wrote, "I trust there's been no Let's Make a Deal" but long time Hoboken politicos ridicule the notion when anything comes to Raia. They've seen this movie many times before and believe whenever Raia is involved there's always a deal and it's subject to renegotiation at any time.

That's the mechanics of the past and present but for reform oriented voters the mere thought spurs antipathy of such an incestuous entanglement, political expediency be damned.

Commenter Keyston Minions summed up much of the on the ground sentiment of many Reform supporters writing: 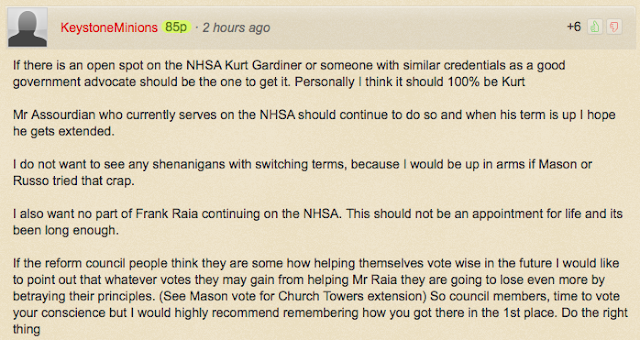 As for the NHSA itself, the day to day head Dr. Richard Wolff, the Executive Director is said to be fine with any outcome voted in Hoboken by the City Council.

In the quarter century of the Sewerage Authority's existence, there's not much sunlight on the finer details of its operations and expenditures. Raia as it turns out has been sitting at the wheel of the SS Sewerage for the entire existence of the agency. The board's legal counsel is said to be a partner in Hoboken with Raia on multiple real estate holdings including the upcoming Northwest development zone and is a 25% owner on another development project with former partner URSA Tarragon seen before the Hoboken Planning Board last fall.

Can the potentials for this conflicted tangled web get any more expansive?

How can any Hoboken City Council member overlook the mushrooming entanglements and vote to approve additional and growing potential conflicts with Raia on the NHSA for 30 years?

One industry professional reached out to MSV and questioned what's under the covers at the NHSA? Noting it's unclear how the breakdown of a $12 million water pump system costs, they marveled at the behind the scenes efforts to keep a quarter century status quo in place.

The only thing certain is if Kurt Gardiner didn't throw his application into the ring, the 2-5 plan or some semblance of status quo shuffling was the end game and the song remains the same.

Regardless, the die is cast.