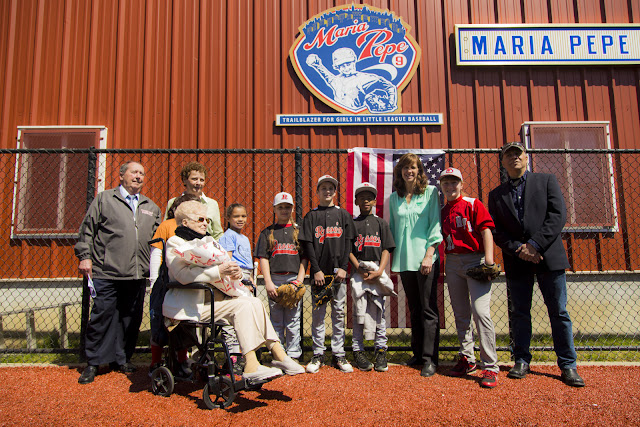 At the Little League opening day ceremonies today, Hoboken Mayor Dawn Zimmer designated the city’s batting cages in honor of Maria Pepe, a Hoboken resident who at the age of 12 was one of the first girls to play Little League baseball and whose actions led to the sport being opened to girls.

“We are proud to name the Maria Pepe Batting Cages in honor of a trailblazer whose passion and bravery opened up Little League to millions of girls,” said Hoboken Mayor Dawn Zimmer. “Baseball was born in Hoboken, and Maria made sure that everyone, both boys and girls, could play.”

In 1972, Maria Pepe was one of the first girls to play Little League baseball at a time when girls were banned from the sport. After only three games, she was forced to stop playing when the Little League organization threatened to revoke Hoboken’s charter. A successful gender discrimination court case filed on her behalf by the National Organization for Women led to girls being able to play Little League. More than 5 million girls have been able to participate in Little League since.

“I would like to express my sincere gratitude for this dedication today,” said Maria Pepe. “I am humbled and honored to receive this recognition, but also proud that over 5 million girls have participated in Little League baseball and softball programs over the past 30 years. I am privileged to know that I get to play forever through all the girls who came after me.”

ESPN ranked Maria Pepe playing Little League Baseball as the fifth “Greatest U.S. women's sports moment” in history. In 2004, Maria threw the ceremonial first pitch at the Little League Baseball World Series in Williamsport. The glove she wore in 1972 is in the Little League Museum in Williamsport and her cap is in the Baseball Hall of Fame in Cooperstown. Maria has also been recognized by the NY Yankees and in the PBS series “Makers: Women Who Make America.”
Posted by SmartyJones at Saturday, April 16, 2016
MAYOR ZIMMER DESIGNATES MARIA PEPE BATTING CAGES TO HONOR TRAILBLAZER FOR GIRLS IN LITTLE LEAGUE
2016-04-16T16:06:00-04:00
SmartyJones
Comments