Sign of the Times: Mister Carmelo's self promotion tour

Being out of elected office doesn't mean you can't be part of the in crowd.

After last fall's November City Council races, Carmelo Garcia was put on ice by that Jen Girl, the indomitable City Council President Jen Giattino who absorbed more mud flung at her than any other candidate that election cycle.

Mister Carmelo's campaign with thousands of filthy mailers regurgitating previously failed Masonic lies is not yet officially tabulated. NJ ELEC must be scratching their head wondering why his campaign which featured 7-11 coffee giveaways and a block party can't file its campaign expenditures.

Look the law is for other people and when the voices in your head say you are "destined for greatness" they must know what they're talking about.

If you have to tell a few whoppers to the public, the courts and law enforcement along the way, surely the Almighty will understand.

Speaking of whoppers, here's a little announcement on behalf of self-promotion a charity walk in Jersey City this weekend.

Look at the first photo of political figures listed on the bottom left.

Why it's the one and only Carmelo Garcia. He calls himself "Assemblyman Emeritus."
Is that a degree you get via mail correspondence course from Harvard?

One Jersey City official reportedly had their photo attached on an earlier version and blew a gasket. The aspirational official was rumored to say something along the lines of 'I don't want to be associated with that guy. He could be arrested tomorrow,' a reference to the former Garcia Chief of Staff, Chris Campos and his wire and bank fraud troubles.

Here's the gist of what's goin' round: 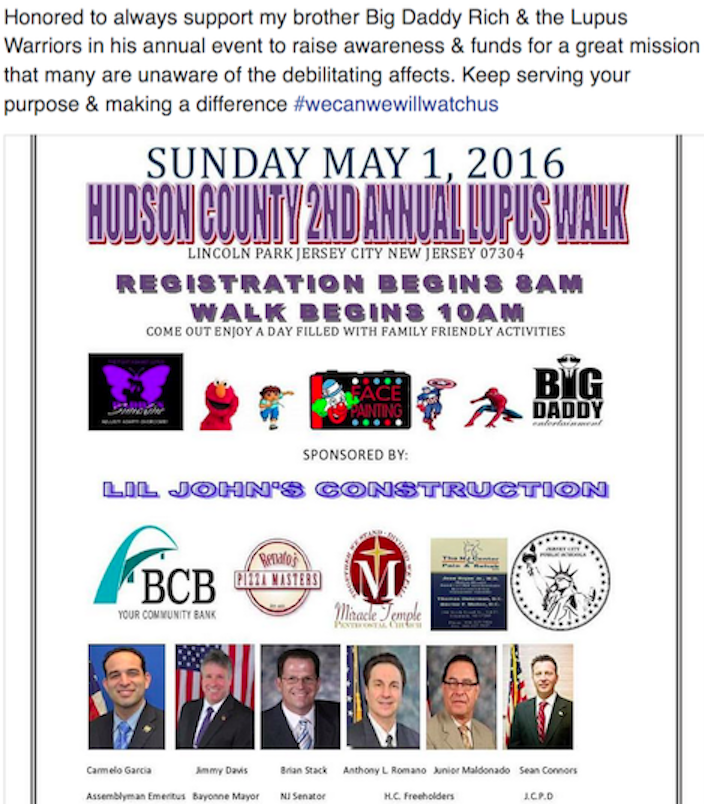