Hovie in a landslide

This video courtesy of Hudson County View condenses some of the discussion surrounding the eventual unanimous council vote appointing Hovie Forman to the HHA as a commissioner.

Other applicants attempted to make a case for themselves to no result garnering not a single vote.

Is it because of their previous support of the extremely controversial Carmelo Garcia? Or does racist and anti-Semitic remarks play a role? How about family members in the HHA who were by sheer political magic not paying any rent at all?

Would any of these things be problematic to "turning back the clock" in the Hoboken Housing Authority?

When MSV interviewed a lifetime Hoboken official about the abuses of people in the HHA, they simply remarked, "that's the way it's always been."

Talking Ed Note: Does anyone find it remarkable that some want, as Michael Russo said leading into last fall's council races, that voters should turn Hoboken back to its former days of "glory."

Hark of the Liebling: 'The lawsuit must go on!'

The First Amendment is a treasured right of Americans - and especially some talking horses.

For good reason, there's no health for a republic if the freedom of thought, expression and opinion are stymied or as in Hoboken's case of some infamy: SLAPPed.

Enter one Hoboken pro-development Old Guard political activist who in the heat of the last council meeting prior to the November council elections may have stepped too far. Or is he owed some seconds from his five minute allotment when he strayed into the muck slamming the mayor by way of her husband?

At a late October 2015 City Council meeting, David Liebler was meandering on some points when he stepped in it. The "it" being his allegations and criticism of the mayor's husband who he claimed is a guru of sorts, the way a previous guru was acclaimed as actually running the mayoralty of one Dawn Zimmer. The eject button soon followed.

While an earlier belief of Lenzbian control proved to be so much fiction with even the Old Guard finally recognizing it as mythical, emails obtained via the "ethnic cleansing" lawsuit surfaced showing the mayor's husband offering his opinion on the never say die dare doings of Mister Carmelo in the Hoboken Housing Authority. This became fodder for the "guru" mantra the Old Guard has repeatedly succumbed, a not too obvious sexist rant Mayor Zimmer can't actually be the mayor at the helm of City Hall.

That the mayor's husband voicing his opinion is evident in the emails which were released by the Carmelo Garcia camp in his years long "ethic cleansing" lawsuit is not in dispute. What's also clear is he was ignored by HHA commissioners considered aligned with the Reform movement. Hey, even the Mahirishi couldn't quite manage that guru thing over the Beatles in the end.

Mr. Liebler didn't get that part of the memo evident in the emails. So too, many in the Old Guard which have been intent on Reform's destruction if not the Mile Square City itself if power, money and jobs are not squandered handed to them.

The demise of the Old Guard, most recently with Reform's stunning 7-2 council victory last November following the mayor leading her ticket to a sweep in the fall of 2013 has seen the guru theme added to its lengthening list of failed political strategies.

David Liebler is however still suing the City of Hoboken for getting the hook with about 20 seconds left in five minutes of public portion time.  He disputes the seconds left and claims his rights were violated by way of the MSTA (Mile Square Taxpayers Association) attorney Charles Gormally, who filed the civil complaint.

In an exclusive interview with MSV, Liebler who has worked for the 2009 mayoral campaign of Frank "Pupie" Raia, for the always controversial Beth Mason and most recently backed the 2013 mayoral campaign supporting Ruben Ramos remains clear on his the lawsuit against the City of Hoboken.

The show must go on!

Among the Old Guard, Liebler has without exception always been an amiable chat over the years and occasional guest writer on MSV, (he's averse to the use of Vote by Mail as an Old Guard staple food at election time). But his own view of the First Amendment has not been as consistent on the subject of online commenters in Hoboken. In that vein, he proudly voiced his support on Hoboken Patch for the 2012 SLAPP-suit, earning no accolades here. 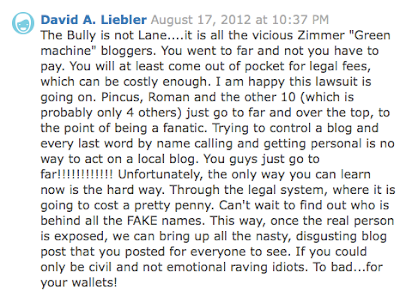 To his credit, he was back to his more amiable self after the SLAPP-suit was interrupted mid-trial last year and thrown out of court. Like many in Hoboken, Liebler read the the massive revelations of the SLAPPers' emails here and on Grafix Avenger which showered much truth on the political activities and false allegations.

But now it's Liebler crying foul on the First Amendment, although he once also decried the millions in legal bills against the City - now he's seeking to add his name to its payee list.

The rest of this story is MSV Premium and will be sent to member emails later today.
Sign up is easy, confidential by debit or credit card, no Paypal account required:
Snailmail option:
RW Brice
1032 Hudson Street
Apt. 1S
Hoboken, NJ 07030

Issue is out. If for any reason you didn't receive yours, email smartyjones@me.com