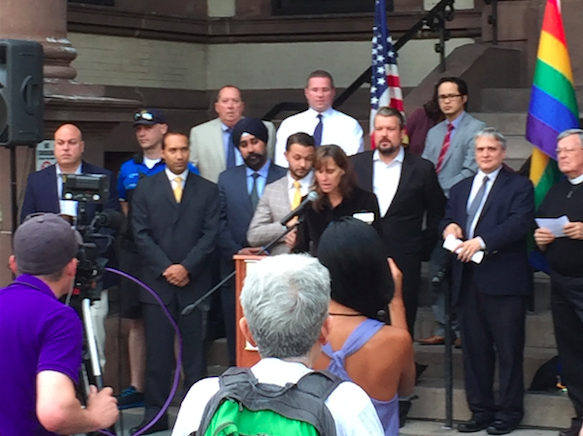 People joined at City Hall to honor the dozens of terrorist victims in Orlando last weekend with Mayor Zimmer and the Hoboken City Council outside City Hall.


Related: During the early am hours of the Orlando terrorist attack, Omar Mateen made more than a dozen phone calls and posted to his Facebook account. New reports obtaining those comments the terrorist offered are just published.

Among them, Mateen wrote during the lull of hours in the attack, "You kill innocent women and children by doing us airstrikes..now taste the Islamic state vengeance."

In his final written pronouncement, the Orlando terrorist predicted, "In the next few days you will see attacks from the Islamic state in the usa."

The UK Independent reported Mateen was inspired by another American terrorist, a suicide bomber who attended the same American mosque.


For more on the Hudson County View story see:
http://hudsoncountyview.com/in-hoboken-over-hundred-people-show-love-for-orlando-massacre-victims/

Mayor Dawn Zimmer announced today that her Administration has hired Brian J. Aloia to serve as Corporation Counsel for the City of Hoboken. Mr. Aloia is the principal of Aloia Law Firm and served as Township Attorney and Director of the Law Department at Bloomfield Township from 2007 through 2016. He previously also served as attorney at the Essex County Department of Public Safety and as a partner with Weiner Lesniak.

“With the addition of Brian as our new Corporation Counsel along with Alysia Proko as First Assistant, I think we have a terrific legal team to represent the interests of Hoboken,” said Mayor Zimmer.

Mr. Aloia received his Juris Doctorate from Quinnipiac University School of Law (1996) and a Bachelor of Science from The University of Scranton (1992). He is admitted to the New Jersey State Bar, United States District Court for the District of New Jersey, and the New York Bar.
Posted by SmartyJones at Thursday, June 16, 2016
MAYOR ZIMMER WELCOMES BRIAN ALOIA AS NEW CORPORATION COUNSEL
2016-06-16T08:41:00-04:00
SmartyJones
Comments