Horse Sense: Are we a bunch of dhimmis? 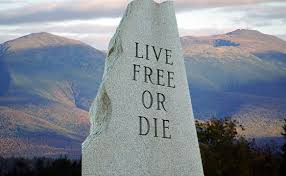 Mayor Dawn Zimmer hails from New Hampshire where the state motto is "Live Free or Die."

Based on the party line politics of distraction, deceit and obfuscation seen in Newark and the Obama Administration, the premise of that proclamation is as dead in Congress as the dozens of Americans recently murdered by terrorists. The agenda taken up is a diversion deemed "common sense." They must think we're a bunch of dhimmis.

Americans are anything but safe with the open borders anti-American agenda rooted in place. Illegal immigration is the terminal crisis politicians refuse to address even in the face of repeated Islamic terrorist attacks on our shores. No amount of murders, rapes, or yes, gun violence deters them one iota. This recent five year old child's rape coming to light involving unknown refugees won't either coining a term for a new domestic threat: rapeugees.

In recent months, we've seen terrorist attacks on both American coasts killing and injuring dozens of Americans. The terrorists in San Benardino opted for guns and homemade bombs against a familiar building targeting their co-workers. Those same co-workers had earlier thrown a party for them celebrating their marriage.

The failure to concede the reality of this Islamic terrorist threat comes right from the top within the Obama Administration. Their agenda driven narrative however has shown it has no intention of addressing their failures.

Why let a serious crisis go to waste? Craven politics rules even if only a small minority (20%) who saw the terrorist attack in San Bernardino as a gun issue vs. a terrorist issue (69%). Orlando will not satiate that agenda driven hunger either, no matter how much it's voiced at government staged candlelit vigils.

For decades, a left-wing tenet insisted disarmed Americans made them safer. In recent years, a burgeoning unholy alliance undermining the West, Judeo-Christian principles and America has seen the peculiar leftist embrace of a foreign ideology based on Islamic or Sharia law. None of this is incidental or without a price as the gay community is learning.

The truth about the real domestic numbers involving gun deaths would shock many. The number one cause atop the list by far: suicide. Rifles of all kinds are in comparison infinitesimal: in the low hundreds range annually.  Actual facts spawns no retreat however in attacking American liberties and their most basic defining freedom - the right to self-defense.

The Second Amendment is not about hunting or about holding an intruder at bay in your home. This fundamental liberty is essentially preserved in the face of threatened government tyranny and rooted in the Constitution and Jewish, Catholic and Protestant doctrine over centuries.

This Administration has engorged itself with an unrelenting divisive agenda refusing to uphold American law and the Constitution on a wide swath of issues, doing deep and lasting damage to our rights and freedoms on multiple fronts. None is more irresponsible than the failure to provide for the common defense.

In addition to the absurd insistence in suppressing the obvious terrorist attacks on the homeland, most recently in Orlando; the failure to enforce our immigration laws is putting all American lives at risk. Is Hoboken a self-designated dirty bomb nuclear free zone? Get those signs up otherwise how would the terrorists know.

Several days ago, the CIA Director tore to shreds the Administration pretense Americans are safer today in the face of Islamic terrorists and the global reach of ISIS. He laid out the risks stating the plans to infiltrate the homeland and the growing dangers.

The operative word here is growing.

What is the point of a terrorist watch list if it doesn't see the terrorists stopped?  But how is the FBI to be effective when they are swamped by the betrayal of government officials who wantonly choose to trample existing laws and assigning Americans to terrorist ambitions as so much cannon fodder?

The left wing insistence to disarm Americans of long rifles in the face of an immediate Islamic terrorist problem is disturbing. Credible reports of Islamic terrorist groups working with the major drug cartels south of the border is a matter of dire importance and like illegal immigration ignored in the narrative inserted in its place with the generic non-descriptive "gun violence."

There's plenty of dhimmis and plenty of dummies but not enough to see American rights to self-defense eviscerated, at least for the moment. ISIS however could care less.

Under the threat of Islamic terrorism, we can't afford to let the dhimmis win. Your life and the lives of your fellow Americans depend on it.

Related: The pretty lies perishing from on high with the CIA Director's facts last week about the growing threat of ISIS on our shores.

Reports the vast majority on the 'no fly' list are not American citizens among the less than hundred thousand leaving a mere fraction, under a thousand are reported to be actual Americans. Someone should tell Mayor Zimmer.

Confiscation is of course the true objective broached by more than a few officials, especially here in the e-Media fabrication plagued northeast on matters of the Second Amendment.