Hoboken has an important opportunity to move forward with the 7th and Jackson project which will benefit the neighborhood and City by creating a new 2-acre resiliency park, a public gymnasium, and 42 units of affordable housing. At the July 6th City Council meeting, the Council will consider a series of resolutions, ordinances, and a Payment In Lieu of Taxes (PILOT) agreement to advance the project within the Northwest Redevelopment Area.

Community Benefits
As part of the project, the developer will be required to acquire, remediate and construct two acres of public park space, which will help to alleviate the open space deficit in western Hoboken. It will include a 1 acre public park with an open grass area, public seating, and a children’s play area along with another 1 acre public plaza with step seating, passive lawn area, restrooms, and a large plaza area designed to accommodate vendors and seasonal markets. Improvements to 7th Street utilizing Belgian block-style accents and a tabled roadway will calm traffic and create visual continuity between the park and plaza. There will be more than 250,000 gallons of underground stormwater detention within the park and plaza to help address flooding issues in the area.

In addition, the developer will construct a 6,835 square foot multi-use public gymnasium that will accommodate the growing demand for recreation programs including basketball, soccer, yoga, and other fitness activities. Nearly 800 children on more than 50 basketball teams must currently share the gymnasium in the Multi-Service Center.

Finally, the project will include 42 on-site affordable housing units to be deed restricted for a minimum of 40 years. For the first time in any redevelopment agreement, the City is making sure that significant community benefits are provided before the development is finished by requiring that the public park and gymnasium be built first.

"Our committee is proud of the many community givebacks that we negotiated into this agreement; including 10% affordable housing, unprecedented water retention infrastructure to combat flooding, a contiguous park and public space that will stretch across two city blocks, and a much needed new gymnasium building capable of hosting many activities for the children of Hoboken,” said City Council Development Subcommittee Chairman David Mello. “Perhaps most importantly, the majority of these benefits will be built before the residential building that facilitated this project is occupied.”

“This project represents a great example of how the redevelopment process can and should work to benefit the community and foster sound development,” said Councilman-at-Large Jim Doyle.

“This is a redevelopment project that represents the needs of the City before all others,” said Third Ward Councilman Michael Russo. “With the community amenities that will be provided, the residents of the Third Ward will now have more than quadruple the amount of open space in our neighborhood. We took a hard line in our negotiations to ensure that we have provided one of the largest water detention systems in Hoboken to help to alleviate our city’s flooding. With the addition of this park and public gymnasium, we have ensured a tremendous increase in recreation opportunities for our children, and with the public plaza able to host outdoor movies, small musical concerts and even theater performances, this will become one of the most sought after neighborhoods in Hoboken.”

The negotiated redevelopment agreement consolidates all approved development into one building, allowing for the creation of new open space. The proposed agreement includes 424 residential dwelling units, 42 of which are affordable housing units which are deed restricted for a minimum of 40 years. In contrast, the existing redevelopment plan, which was adopted in 1998, allows for a total of 434 units and does not require any affordable housing. The existing plan also does ­­­­not require community benefits such as open space, flood mitigation, or the creation of a public gymnasium. 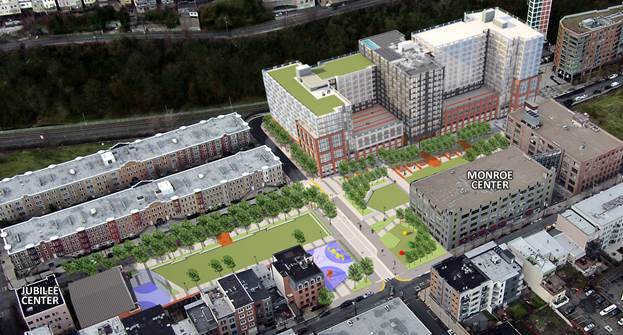 Financial Analysis
“This project provides $52 million in community benefits, compared to a loss in tax revenue of $30 million for Hoboken taxpayers as a result of the PILOT agreement necessary to make this project possible, providing important benefits at an extremely reasonable cost,” added Mayor Zimmer. “While the County would lose out on an estimated $31.6 million in tax revenue from Hoboken, it is important to recognize that Hoboken taxpayers already pay a disproportionately high amount of taxes to the County. And with the Council’s support, through the annual budget process, we will be working to make sure we support the schools even with this PILOT.”

In order to make the proposed project financially viable, a PILOT is needed. The tax benefit to the developer is approximately $118 million over 30 years, or $61 million in present value. The majority of this cost is attributable to a reduction in taxes paid to Hudson County, while the present value cost to Hoboken taxpayers is approximately $30 million of the $61 million. By comparison, the present value of the community benefits is $52 million (see chart). 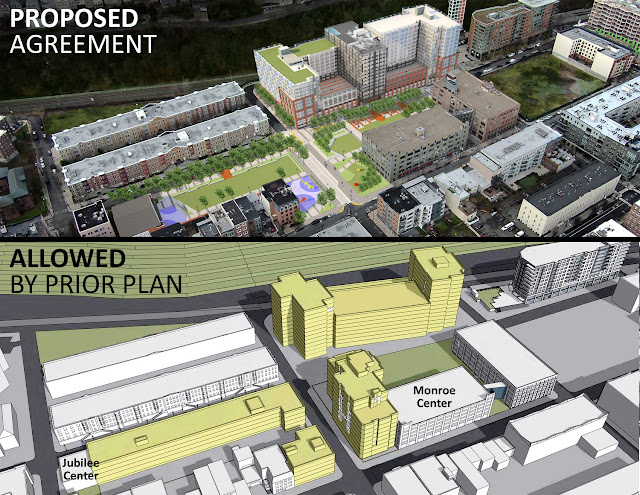