Mayor Dawn Zimmer joined other Hoboken officials, dignitaries, and members of the public for a groundbreaking ceremony for the Southwest Park - a one acre park in southwest Hoboken designed to hold 200,000 gallons of stormwater runoff that will also serve as a model for green infrastructure resiliency parks in New Jersey. The property is currently a surface parking lot and is the first phase for a larger Southwest Park.

“The Southwest Park project will transform a parking lot into a green oasis for this thriving neighborhood and will be a model for building resiliency parks that help mitigate flooding,” said Mayor Dawn Zimmer. “This park has been a goal of mine since 10 years ago when I was a stay-at-home mom advocating with my neighbors, and it is the reason why I got involved in government. I am thankful to all of the community advocates, the City Council, Hudson County, New Jersey Department of Environmental Protection and the New Jersey Environmental Infrastructure Trust for their strong support of this project.”

“For over ten years, it's been a labor of love to fight for the breaking ground on this park,” said Councilman At-Large David Mello. “Countless friends and neighbors have worked together to make this cutting edge open space a reality for our growing and ever evolving southwest neighborhood. I'm so happy for the whole community that this project is finally breaking ground, and was honored to have helped bring it to fruition.”

"Hoboken's Southwest Park plan as an outstanding example of an innovative, multi-benefit project," said Jane Kenny, co-chair of Jersey Water Works, a cross-sector collaborative focused on transforming New Jersey's aging and inadequate water infrastructure. "This park will not only help solve the problem of chronic flooding in the area, but will reduce sewage discharge into the Hudson River and transform a paved parking lot into a vital and healthy recreational green space serving one of the most densely populated communities in the country. All of us at Jersey Water Works applaud today's groundbreaking, and are delighted to see this plan become a reality."

Hudson County will begin the rehabilitation of the Park Avenue bridge between Hoboken and Weehawken on July 5th. An announcement from the County regarding the project, including traffic impacts, is included below.

The County has decided that during construction the Park Avenue bridge will be configured as a one-way southbound road. As a result, the Willow Avenue bridge will be the only northbound route out of Hoboken. Drivers should plan for significant traffic delays, consider alternate routes, adjust work hours or telecommute if possible, use public transportation, and provide extra travel time.

It is likely that this configuration will result in increased congestion when exiting Hoboken towards Weehawken, especially during the morning rush hour. At Mayor Zimmer's request, the County has agreed to evaluate the traffic impact during the first few weeks of construction to determine if changes are needed to the detour plan in order to facilitate the efficient northbound flow of traffic.

Public input will be important to the traffic evaluation conducted by the County so Hoboken residents affected by the detour plan should provide their feedback to County Executive DeGise, Freeholder Romano, Mayor Zimmer, and 2nd Ward Councilwoman Tiffanie Fisher. 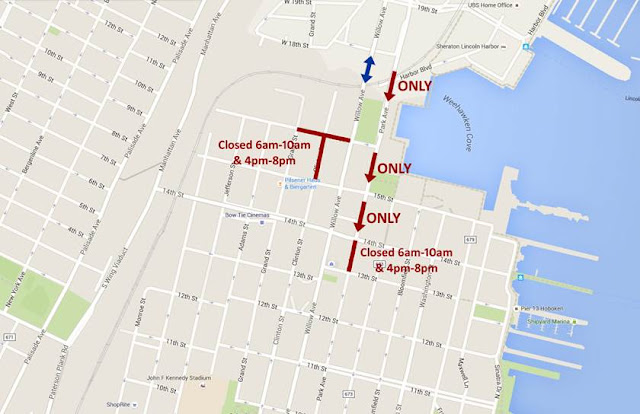 The Hudson County Roads Department will begin the rehabilitation of the Park Avenue Bridge connecting Hoboken and Weehawken near the entryway to the Lincoln Tunnel, on Tuesday, July 5th.

The bridge, which spans over Harbor Boulevard from 16th Street to 19th Street to connect Park Avenue in Hoboken to John F. Kennedy Boulevard in Weehawken, will undergo a complete concrete deck rehabilitation, replacement of its plug joints to its armored joints, curb improvements, painting work, and roadway striping.

A traffic detour plan will move cars diverted from the Bridge’s under-construction lane through local streets. Traffic control and traffic direction will be provided by the Hudson County Sheriff’s Department, and the Hoboken and Weehawken Police Departments, following specifications agreed to by County and municipal engineering officials and the New Jersey Department of Transportation (NJDOT).

Street closures will be controlled by order of the municipalities. Hoboken has ordered the following closures to direct traffic to Willow Avenue and away from Park Avenue:

All construction work will be conducted in daytime, six days per week, from 7:00 am to 7:00 pm.