About that Declaration of Independence 'thingy'

Independence Day is no coincidence of natural events and the American experiment tested those Founders who paid mightily for a declaration from an English sovereign.

Reflections on those monumental July days in Philadelphia. 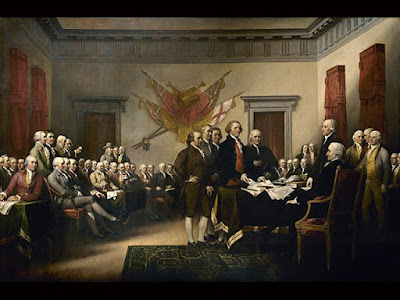 PREAMBLE TO THE DECLARATION OF INDEPENDENCE

We hold these truths to be self-evident, that all men are created equal, that they are endowed, by their Creator, with certain unalienable Rights, that among these are Life, Liberty, and the pursuit of Happiness.

That to secure these rights, Governments are instituted among Men, deriving their just powers from the consent of the governed, That whenever any Form of Government becomes destructive of these ends, it is the Right of the People to alter or abolish it, and to institute new Government, laying its foundation on such principles, and organizing its powers in such form, as to them shall seem most likely to effect their Safety and Happiness.

Prudence, indeed, will dictate that Governments long established should not be changed for light and transient causes; and accordingly all experience hath shewn, that mankind are more disposed to suffer, while evils are sufferable, than to right themselves by abolishing the forms to which they are accustomed. But when a long train of abuses and usurpations, pursuing invariably the same Object, evinces a design to reduce them under absolute Despotism, it is their right, it is their duty, to throw off such Government, and to provide new Guards for their future security.


Talking Ed Note: Nowhere does the concept of a foreign ideology appear we as citizens of the American republic "belong" to the government, an inverted bastardization of those principles.

Despotism, unilateral tyrannical abuses are a theme the signers frequently warned and pointed "when a long train of abuses and usurpations" lead to same decreed "it is their duty, to throw off such Government."

Many of the signers of the Declaration of Independence paid for these words of liberty with their homes, their livelihoods and the cost in their own lives.


Five signers were captured by the British as traitors, and tortured before they died.

Twelve had their homes ransacked and burned. Two lost their sons serving in the Revolutionary Army; another had two sons captured.

Nine of the 56 fought and died from wounds or hardships of the Revolutionary War.

One signer, Thomas Nelson, Jr. in the final decisive battle at Yorktown was said to order his soldiers to shell his own home occupied by British officers and high command. He underwrote all his family's wealth in the fight for liberty and would die bankrupt. In the end, he expressed not a solitary regret.

"Nelson was an active soldier during the American Revolutionary War. He served as the commanding General of the Lower Virginia militia. He participated during the siege of Yorktown and told George Washington to fire on his own home where Cornwallis was based."

How did America change from the land of the brave who risked all at its birth and "tried men's souls" to one where "public service" became opportunity for grifters to monetize the very republic itself for vast wealth and utter abuse of the institutions overseen?

As Marcus Tullius Cicero one of the greatest citizens of Rome wrote,
"A nation can survive its fools, and even the ambitious. But it cannot survive treason from within."