Hillary Clinton: "I'm so happy this day has come" 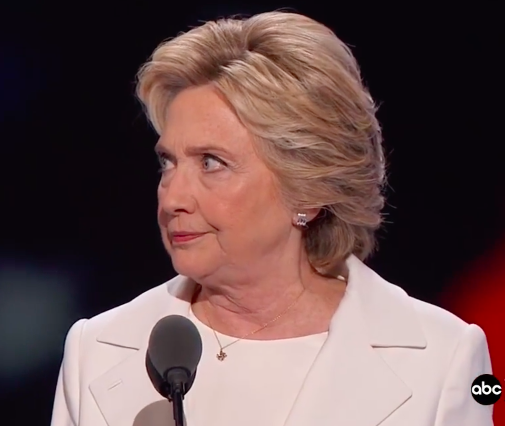 Thank you! Thank you for that amazing welcome.
And Chelsea, thank you.
I’m so proud to be your mother and so proud of the woman you’ve become.
Thanks for bringing Marc into our family, and Charlotte and Aidan into the world.
And Bill, that conversation we started in the law library 45 years ago is still going strong.
It’s lasted through good times that filled us with joy, and hard times that tested us.
And I’ve even gotten a few words in along the way.
On Tuesday night, I was so happy to see that my Explainer-in-Chief is still on the job.
I’m also grateful to the rest of my family and the friends of a lifetime.
To all of you whose hard work brought us here tonight, and to those of you who joined our campaign this week.
And what a remarkable week it’s been.
We heard the man from Hope, Bill Clinton.
And the man of Hope, Barack Obama.
America is stronger because of President Obama’s leadership, and I’m better because of his friendship.
We heard from our terrific vice president, the one-and-only Joe Biden, who spoke from his big heart about our party’s commitment to working people.
First Lady Michelle Obama reminded us that our children are watching, and the president we elect is going to be their president, too.
And for those of you out there who are just getting to know Tim Kaine – you’re soon going to understand why the people of Virginia keep promoting him: from city council and mayor, to Governor, and now Senator.
He’ll make the whole country proud as our Vice President.
And I want to thank Bernie Sanders.
Bernie, your campaign inspired millions of Americans, particularly the young people who threw their hearts and souls into our primary.
You’ve put economic and social justice issues front and center, where they belong.
And to all of your supporters here and around the country:
I want you to know, I’ve heard you.
Your cause is our cause.
Our country needs your ideas, energy, and passion.
That’s the only way we can turn our progressive platform into real change for America.
We wrote it together – now let’s go out there and make it happen together.
My friends, we’ve come to Philadelphia – the birthplace of our nation – because what happened in this city 240 years ago still has something to teach us today.
We all know the story.
But we usually focus on how it turned out - and not enough on how close that story came to never being written at all.
When representatives from 13 unruly colonies met just down the road from here, some wanted to stick with the King.
Some wanted to stick it to the king, and go their own way.
The revolution hung in the balance.
Then somehow they began listening to each other, compromising, finding common purpose.
And by the time they left Philadelphia, they had begun to see themselves as one nation.
That’s what made it possible to stand up to a King.
That took courage.
They had courage.
Our Founders embraced the enduring truth that we are stronger together.
America is once again at a moment of reckoning.
Powerful forces are threatening to pull us apart.
Bonds of trust and respect are fraying.
And just as with our founders, there are no guarantees.
It truly is up to us.
We have to decide whether we all will work together so we all can rise together.
Our country’s motto is e pluribus unum: out of many, we are one.
Will we stay true to that motto?
Well, we heard Donald Trump’s answer last week at his convention.
He wants to divide us - from the rest of the world, and from each other.
He’s betting that the perils of today’s world will blind us to its unlimited promise.
He’s taken the Republican Party a long way, from “Morning in America” to “Midnight in America.”
He wants us to fear the future and fear each other.
Well, a great Democratic President, Franklin Delano Roosevelt, came up with the perfect rebuke to Trump more than eighty years ago, during a much more perilous time.
“The only thing we have to fear is fear itself.”
Now we are clear-eyed about what our country is up against.
But we are not afraid.
We will rise to the challenge, just as we always have.
We will not build a wall.
Instead, we will build an economy where everyone who wants a good paying job can get one.
And we’ll build a path to citizenship for millions of immigrants who are already contributing to our economy!
Read more »
Posted by SmartyJones at Friday, July 29, 2016
Hillary Clinton: "I'm so happy this day has come"
2016-07-29T03:05:00-04:00
SmartyJones
Comments