Gristy Chewables: If a tree falls in a forest...

Over the weekend MSV followed up with two would be BoE trustee candidates. Neither has come in from the cold leading one to safely conclude they are quietly stepping out of the spotlight.

The two candidates expected to disappear from the campaign trail before their arrival are both of the XY variety: Zach Weiss and Cory Johnson. 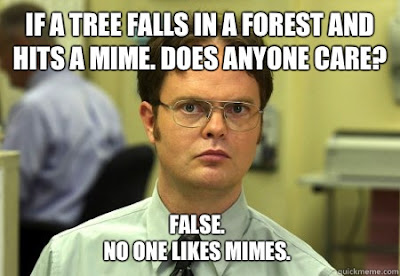 Johnson was appointed earlier this year as an alternate to the critically important Hoboken Zoning Board. When the City Council went through the rigorous process of identifying candidates for the depleted board, his name was supported by Councilman Ravi Bhalla, partly on the basis of being African American.

The appearance of the Hoboken Zoning Zoning Board alternate as a candidate for the BoE, all in the same calendar year raised some eyebrows but confirmed for some Johnson as they say in political parlance is a "comer."

Others were uncomfortable with Johnson's City Council zoning appointment because of his realty resume. The only question left for the magically disappearing candidate is when he'll pop up next in a Hoboken political campaign. Let's assume it'll be sooner than later.

In the interim does anyone know where Johnson or Weiss stand on local issues or Hoboken's education landscape? We hardly knew ye... or to put it more bluntly, we don't know anything.

Back on August 1st, MSV exclusively wrote on the BoE candidates slated to make a run and noted the eight entries made for an odd number considering there's three trustee seats up this November and typically candidates run as a three team slate.

"Two other candidates may join to run an incomplete third slate in Cory Johnson and Zach Weiss," was the word.

If both Cory Johnson and Zach Weiss are clearing the decks, the Reach Higher ticket led by incumbents Irene Sobolov, Jennifer Evans and second time candidate Sheillah Dallara will be in a mano a mano battle with their opposition.

Perennial candidate Patricia Waiters announced in a recent City Council meeting a conspiracy against her put her intended candidacy in the lurch as she missed the deadline. She says she'll run as a write-in. Maybe her mentor Mister Carmelo will help with that. Ok, maybe not.

The emerging, unnamed slate set to face off against Reach Higher is anticipated with Francis "Chipper" Benway, Jessica Nelson and Jennifer Rossini.

More than one source believes the two ladies are backed by Hoboken Freeholder Anthony "Stick" Romano. These slates don't grow on trees ya know.