Timeline of the NY-NJ terrorist bombings


NEW YORK (CBS NewYork) — A man being sought in connection with an explosion in Seaside Park, New Jersey and another blast in Chelsea is believed to have been taken into custody following a shootout, Linden police said.
Authorities Monday had been looking for Ahmad Khan Rahami, a 28-year-old naturalized U.S. citizen from Afghanistan who was wanted in both incidents Saturday.
Linden police said they found Rahami after officers responded to a call of a man sleeping in a hallway of a local business.
When an officer approached the man, the man raised his head and that’s when the officer recognized him as Rahami, Capt. James Sarnicki with Linden police told CBS2.
“The suspect pulled out a gun and fired at the officer and striking him in the abdomen,” Sarnicki said. “The gentlemen got up and started walking down the street in a westerly direction. I’m told that he was randomly discharging his handgun and one of the officers was able to get close enough to him and return fire.”
Posted by SmartyJones at Monday, September 19, 2016
Person of interest in Chelsea & Seaside Park explosions captured after police shootout
2016-09-19T12:10:00-04:00
SmartyJones
Comments

A series of terrorist bombings and attempts in New York City and New Jersey this weekend is placing federal law enforcement and terrorist task forces on high alert.

Early Monday morning, the FBI identified a person of interest wanted in the latest in a series of terrorist related bombing attempts.

With the morning rush hour, an emergency alert was issued by authorities for a suspect: Ahmad Khan Rahami, 28 of Elizabeth, NJ. The suspect is considered armed and dangerous.

The authorities are asking for the public to call 911 if the identified man is seen: 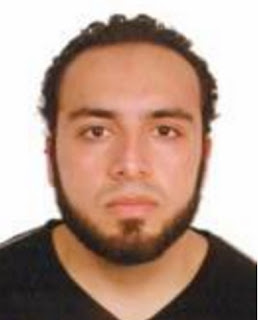 Overnight the Elizabeth mayor Christian Bollwage confirmed the FBI was on the scene of that New Jersey town late Sunday night engaging in what's described as five pipe bombs similar to the bomb that exploded on Saturday night on 23rd Street in Manhattan.

One of the five pipe bombs in Elizabeth exploded when a robot was engaged to disarm it.

More than two dozen people were reported injured in the Saturday night Chelsea blast, none seriously as a dumpster was rocketed across the street in the explosion.

Additional reports last night claim five people were in custody after being pulled over on the Belt Parkway reportedly armed. Those details await further confirmation.

Governor Chris Christie on Sunday declared the explosion of a bomb on the route of a Marine Corps 5K charity run in Seaside an act of terror as other officials were silent to the assessment on what was described Saturday evening by NYC mayor Bill de Blasio as an "intentional" act in Chelsea.

President Obama was in New York City for a fundraiser this weekend but has made no comment on the terrorism incidents.

Related: The Minnesota man alleged to have stabbed eight people in a St. Cloud, Minnesota mall Saturday night in what the FBI described as a "potential act of terrorism" has been identified as Dahir A. Adnan. The 22 year old man, an immigrant of Somalia was shot and killed by an off duty police officer.